Bogotá is inundated by the great outdoors.  Live walls and parks are sprinkled throughout the city, bike paths dominate sidewalks, and mountains covered in hiking trails and jungle are at your backdoor.  There’s no excuse, it’s time to be active and get outside.

The city of Bogotá sits in what was once Lake Humboldt, at 8,660 ft., in the Andes mountain range.  The savanna, as it’s called, has 2 rainy seasons, each 3-4 months long, so it’s not a matter of if it’s going to rain, it’s a matter of when.  Carry an umbrella with you at all times, or at minimum a hat.  The rain doesn’t stop locals, but it may make most visitors hesitate before going outside.  Such is life in Bogotá.  The good news is that everything is green, lush and clean.  And when the sun comes out, you’ll find yourself whispering ‘what is this… Gorillas in the Mist?’ as the clouds rise and show off the jungle-covered mountain range alongside the sprawling city. 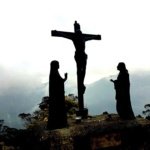 Monserrat: one of the Stages of the Cross

You have multiple hike options from almost anywhere you’re staying in Bogotá.  In North Bogotá, you’ll find the beautiful hike of Sendero Quebrada La Vieja.  Off of downtown, you’ll find Monserrate and trails to Lady Guadalupe.  All 3 of these famous hikes have vast views of the city (assuming there’s no cloud cover).  Monserrate is the most popular with visitors and is a pilgrimage destination.  Hiking the trail on a Sunday, you may pass people making the trek on their knees.  There’s a funicular and gondola option, however, and at the top are the 14 stages of the cross, a church, restaurants and an outdoor market.

Just an hour and a half outside the city is the tiny town of Suesca: Colombia’s most famous area for rock climbing.  We went hiking, bouldering, and cave exploring in this area with 3 guides.  It was my first time bouldering in a cave.  Careful hand and feet placement are crucial as you work to avoid falling into the numerous cave ponds, holding on to sharp rocks with just the tips of your fingers.  How deep are these ponds, you ask?  If you’re 5’2″, they’re chest deep.  Yup, I took a plunge on my first attempt.  Other than being a bit wet and cold the rest of the day, the scenery, views, professional rock climbers and high-liners were all transfixing.

One guy doing a highline between two cliffs, about 400ft up, fell.  There were some screams and a collective gasp from the onlookers.  He was caught by his rope, which was connected to his waste, dangled for several seconds, then pulled himself back up to a seated position.  The rest of us were trying to get our own bearings when he effortlessly hopped to a standing position on the line and continued to make his way across the 200ft gap.

Most hikers are trailed by a few happy dogs who find their way up the cliffs and over narrow swing bridges.  At the end of the day, the community of hikers and climbers all congregate at the 4 shack restaurants in town to relax, refuel, and tell the death-defying tales from the day. 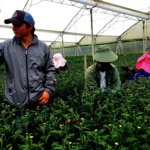 Aside from the Gold Museum and Andrés Carne de Res restaurant, a visit to one of the Flower Farms here in Bogota is almost a requirement.  Because of the biodiversity of the country and its wet climate, Colombia is the world’s 2nd largest flower exporter.  We went to Bacata Finca’s mum farm, just one of 5 farms they own on the outskirts of Bogotá.  I gained a whole new appreciation for buying flowers at the store after walking through the hand-planting, watering, and tending that is required for the growth of 70,000 flowers per day.  During Mother’s Day week, they ship 5 million mums alone overseas.

Ciclovia: Sundays and holidays are for biking in this city.  Major roads are closed to pedestrian-only traffic, and the streets line with sliced fruit and juice vendors.  Take Carrera 15 downtown to La Candelaria on a bike (about 6 miles each way from Zona T) and experience the excitement and chaos of downtown.  Street performers are made up of Michael Jackson look-a-likes dancing to Thriller, silver painted men singing the blues, and Alien vs Predator characters posing for pictures (among other out-of-date scenes).  And alongside all of this, couples have no problem dancing Tango and Salsa next to 1980’s boomboxes blasting music.

Bogotá may be the city your mom told you to avoid in the ’90’s, but it’s blossomed into a safe, affordable capital with access to the path less traveled.  Discover the great outdoors of the new Colombia before everyone else does.