Well I’ll Be Namned:  My first 24 hours in Namibia

Well I’ll Be Namned:  My first 24 hours in Namibia 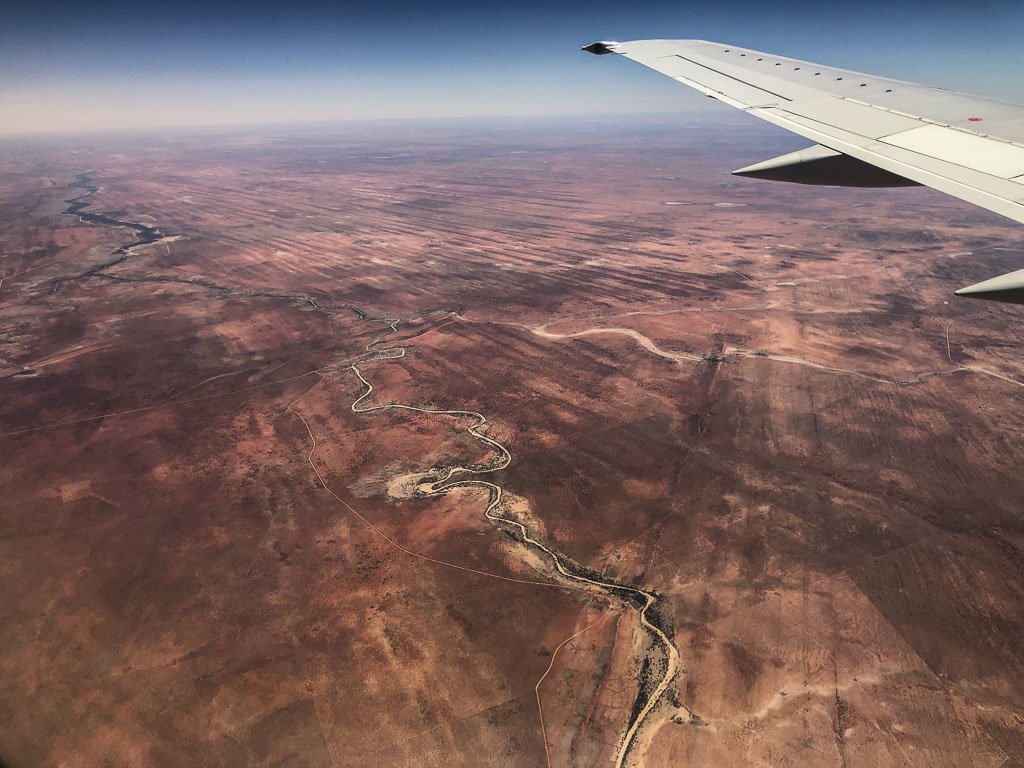 Namibia from the air 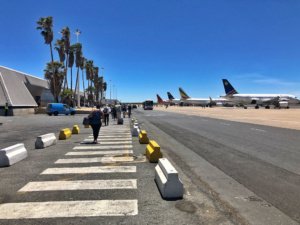 We flew over a stark, pancake-flat landscape that turned yellow and then light red.  Not a building or flicker of life was in sight below us.  A thin snake-like dry riverbed cut through the gravel terrain followed by bald mountains appearing in the distance.  An airstrip came into view.  As we landed, I noticed a line of palm trees swaying in the African heat, a clear blue sky, and emptiness for miles in every direction.

This is Namibia, previously known as Southwest Africa.  The country’s southern neighbor is South Africa, to its east lies Botswana, to the north Angola, to the West, a cold and violent Atlantic coast.  On the country’s northeast corner, an unusual narrow strip of land juts out like a finger pointing east, sandwiched between Zambia, Zimbabwe and Botswana: a border carving leftover from its German Colony days, pre-1920’s Treaty of Versailles. 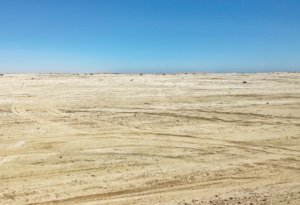 Drive from Windhoek to Swakopmund

If you haven’t guessed, Namibia is an inhospitable desert country.  Only 1% of its land is actually farmable, and the Namib Desert along the coast gets somewhere between 1/2-7 inches of rain per year.  Despite the barren landscape, agriculture makes up almost 50% of the country’s GDP; mining and tourism follow at 20% and 10%, respectively.  Interestingly, it’s the least populated country in the world after Mongolia with 2 million people on a land 20% larger than Texas.

My first stop was a night in the capital city of Windhoek, 45km from its airport.  The following day I’d set out for the coastal town of Swakopmund, a very German-influenced resort town just south of the Skeleton Coast where I’d work at a surfing hostel for 3 weeks.

The Skeleton Coast was what originally peaked my interest about this place.  It was named after whale bones littering its shores, but in modern day, it refers more to the skeletons of ships that were lost in fog and pounded into the shore by waves.  Masts and hulls peak out from rolling waves, beaches and sand dunes, abandoned by crew who most likely tried but failed to cross the the seemingly endless desert.

This country was foreboding and unique: desert against ocean.  It was tribal and yet western: a European influence in the heart of Africa.  There was something strange and yet familiar about it all and I couldn’t wait to disappear into its culture. 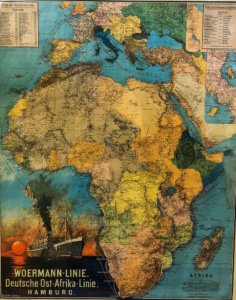 I read in Frommers Guide Book that Namibia is safer than both Europe and the US.  And separately, the WSJ had listed the country as one of the 10 most Intriguing Travel Destinations of 2019.

My first sign that the guide book was misleading was the obvious security around the capital.  In many areas, homes were fenced in and business windows were behind bars; electric wire deterred intruders with 8′ high gates.

When I decided to leave my hostel the afternoon I arrived for the grocery store (I was staying at Chameleon Backpackers: recommended as the best place in town for backpackers, complete with a tiki bar and wading pool), the reception asked why I was taking a bag with me.

“You shouldn’t take anything,” she replied.  She pointed to my wallet and told me to put it as far down into my pocket as possible, then to leave my phone and everything else behind.  “They won’t take shopping bags from you,” she went on, “but they will go after a travel bag that may have a phone and wallet in it.  Why give them a reason?”

Maybe this country wasn’t safer than the US.

In addition, I was also told to always memorize the taxi’s 4-digit license number on the side door in case the driver mugs me.  That way, I could reference it with the police later.

Welcome to Africa… time to get a little more paranoid.

A Ride to the Coast 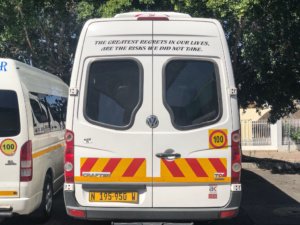 Van from Windhoek to Swakopmund

The following morning, after trying and failing to locate my lost luggage from the airline, I took a local commuter mini-van on a 4 hour road trip to the coast for about $10.

The minivan was first-come-first-serve and left from a gas station, departing after it was filled with people.  One of the other parked minivans had a quote printed over its backdoor: “The Greatest Regrets In Our Lives Are The Risks We Did Not Take”.  Caution tape was painted around the van.  Was this a bungee jump or a transport vehicle?  I looked around nervously.

In the back seat, an old white man with deeply carved wrinkles weaved, reeking of alcohol and cigarettes (it was 10am).  Next to him was a young black couple in nice adventure clothing, huddled together away from the smell.  In front of me, a Herero woman (one of the many Namibian native tribes) was dressed in full Victorian era gear, complete with a horned hat and matching layers of beautiful silk puffy clothing.  I had read about this amazing garb, brought in by missionaries in the 1800’s who couldn’t bare to see people half naked; the style stuck with this tribe (known for raising cattle and being the wealthiest of the native groups) despite the brutal heat. I got a single seat by a window and, after my introductory safety course in Windhoek, clutched all my belongings tightly.  I did part with one of my backpacks (mainly filled with dirty laundry at this point) which was now with the rest of the group’s luggage in the open metal trailer behind us, a dirty blue tarp securing the towering mound with bungee cords.  After 25 minutes, we were filled to capacity and headed off into the desert, the small trailer rattling behind us.

I was headed for my first Workaway job in Namibia at a hostel called The Salty Jackal.  There hadn’t been too many work exchange options listed for Namibia, and this hostel was one of the few.  I’d be helping check in guests, manage the cleaning and maintenance, and hopefully learning how to surf along with what makes this country tick.

What I was really looking forward to would be working with 2 different safari companies, but those jobs wouldn’t start until mid-February.  At least the hostel would help me integrate into the culture in the meantime. 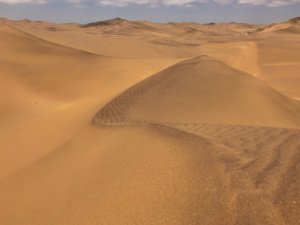 The desert changed appearance during the drive, from tufts of desert shrubs and 7’ tall termite mounds, to rocky gravel that resembled miles of cement, to full-on sand dunes.

I got out of the minivan at my stop and grabbed what remained of my luggage (the airline had lost my main roller bag): two small backpacks.  I could see the ocean a couple blocks away, the sand dunes running up to the edge of town, the roads unnecessarily wide, and the fences around the homes about half the height of those in the capital.  Security must be a little more lax here… I looked up at the minivan and waived goodbye to the motley crew as it pulled away and kicked up sand.  Looks like I had arrived at my home for the next few weeks.