Welcome to the Jungle: Visiting a spa in the jungles of Colombia

Welcome to the Jungle: Visiting a spa in the jungles of Colombia 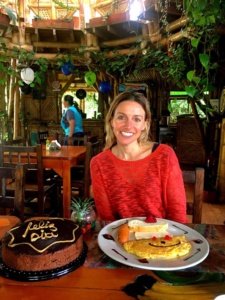 I spent my birthday this year high up in the jungles of Colombia in what had been guerrilla military-run land until 2004.

Traveling with a friend from Remote Year and one visiting from the States, we took a local bus 2 hours from Medellín to the town of Cocorná on Easter Sunday.  (Easter week, otherwise known as Holy Week, is like Christmas in Colombia; it’s the most important celebration of the year.)  Eating the Menu del Día offered for lunch on the second floor of an open bar/restaurant overlooking the main square, we witnessed the village’s Easter church service being amplified onto the park via loudspeakers, the exodus from the church post-mass, and later, a large cluster of balloons sail into a towering eucalyptus tree, which (after many attempts with ladders and trucks) was returned to its rightful owner amidst the cheers of the entire town.

After a couple hours of trying to negotiate multiple taxis in Spanish (all refusing to take us into the jungle above town due to road conditions), we finally found a truck (through the pharmacist’s brother’s wife’s cousin) who was willing to take us.

When we got there, we knew the trip had been worth it.  Thatched tiki huts made with Colombia’s native giant bamboo plant called Guadua peeked out of gaps in the jungle.  Rivers cascaded down the mountain filling pools and sweeping through mosaic-tiled canals.  Sugar cane fields covered one hillside while horses and cows walked in shoulder-high grass.

A rope bridge, suspended over a raging river, connected one part of the property to our thatched hut. Our hut’s bathroom was outside, with an overhang protecting the sink and toilet, and was surrounded by local bamboo.  There were no mosquitos or noticeable bugs anywhere, which was great since there were gaps in our bamboo walls and thatched ceiling. We were also missing mosquito netting above the beds- something that was a necessity along the coast, but here didn’t seem to be a problem.  Every night, a choir of torrential rains and thunder performed the kind of white noise I’ve only heard on sound machine recordings back in New York City (appropriately titled rainforest bliss).  Each morning, we were woken with a knock at the door and offered a tray of freshly made juices or smoothies with chia seeds.  Between delicious healthy meals and hikes, we participated in spa rituals of sugar and sand scrubs, a body clay mask, and a eucalyptus-rosemary face and sinus steam, interrupted only by dunks in the pure mountain stream.

Evening rituals had the nearby families from the mountainside and town congregate around a fire where music and storytelling were performed.  And, aside from the 3 of us, the only other visitors were a couple in their 20’s: the boyfriend from Cologne, Germany and the girl a local doctor from the coffee region of Tolima.

This heaven on earth is a place called Tierra de Agua.  A two-day, one-night, full spa package included a deep tissue body massage, therapy scrubs, alternating hot/cold water plunges, 3 meals, and guided hikes through jungle, waterfalls, and sugar cane fields, came to the equivalent of $130 USD.  Without the massage, it was closer to $50.

Not a bad way to spend a birthday…