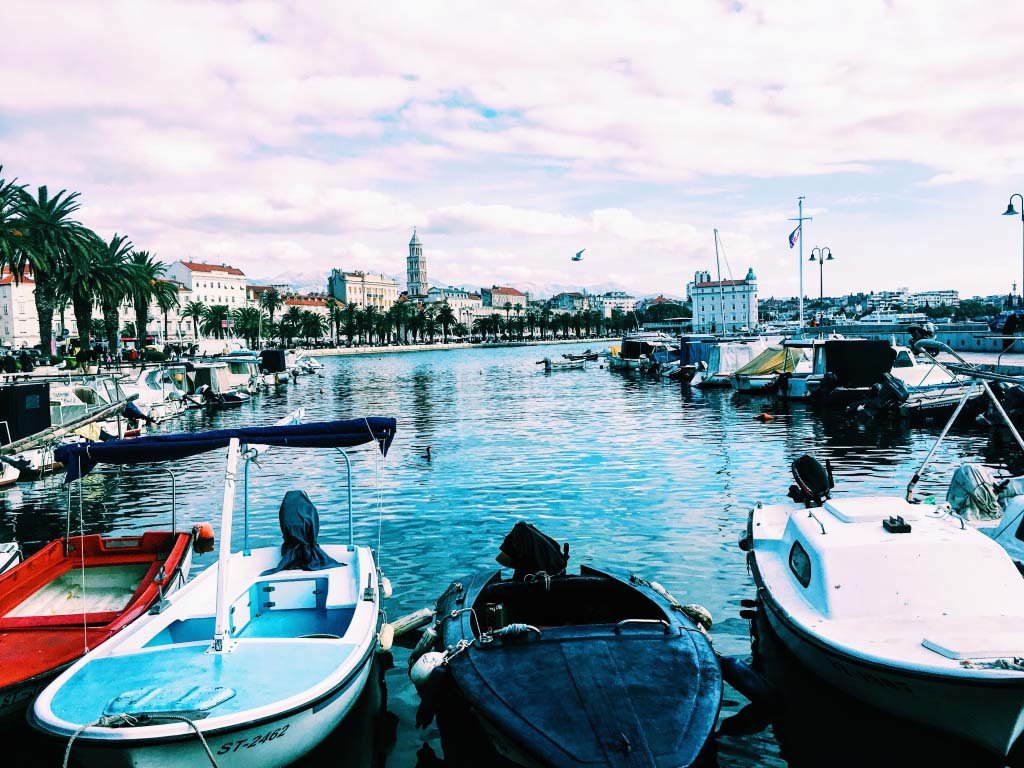 We left Sofia, Bulgaria on November 5th and chartered a flight to Split, Croatia.  Split is a coastal town, and the 2nd largest city in Croatia.  It’s not the cheapest place to fly into- the airport is small and is all but shut-down in off-season, hence the chartered flight.

Not knowing what to expect of Croatia except photographs of rocks leading to water, sailboats and mountains… (and of course scenes from Game of Thrones), I was impressed with how lush it was when we exited the plane and entered a rainy, mountainous area with palm and pine trees dotting the coast.

We exited our plane (which had been our own private party for an hour and half, blasting music from seats, people wandering from row to row to chat) and boarded an airport bus, which, once full with Remote Year folks, rolled about 8 feet to the airport entrance, stopped and lowered with a hiss before opening its doors to let us out.  The happy chatter of arrival and expectation quieted and turned to hearty laughter.  Looks like silly rules exist here, too!

I have my own apartment just up the hill from the co-working space with 3 balconies and a washing machine (I will forever appreciate the in-apartment washing machines, coming from NYC living, even if none of them have driers), and have 4 other remotes as neighbors. We’re within walking distance of two markets and numerous restaurants on the water’s edge (also known as the Croatian Riviera) and are about 2 miles from the old town, ferry, and the Diocletian Palace, or main center of Split… a route we can follow along the water’s edge nearly all the way to the city center.

Day 1 we spent under cover in a bar (me drinking my hot teas and hot chocolates and everyone else throwing back fun cocktails, intermingled with Irish Coffees) until our welcome dinner started, in a pier/yacht type restaurant just off the marina.

The following day, we toured Salona, which was the Roman Capital for the Dalmatian coastal region and has ruins dating back over 2,000 years ago.  To keep out Germanic tribes around 170AD, they built a 2+ mile wall around the city with over 90 towers.  Though there’s not much left but fields of ruins cascading down the mountainside, it’s beautiful.  Bath houses, cemeteries, and an amphitheater are some of the major sites you can visit.  We also visited the fortress of Klis, which sits on a mountaintop overlooking Salona (and is a great view of Split and the ocean).  This is one of the sites used in Game of Thrones for the outdoor scenes in Mereen.

The old city of Split is still bustling inside the walls of Diocletian’s Palace (also used in Game of Thrones for the streets of Mareen and for Daenarys’ throne room) it was built in the 4th century and houses stores, cafes and restaurants, and is right on the marina.  It’s pretty spectacular to have a functioning, beautiful palace be the center of this city set in the hills and on the ocean.  I can only imagine how spectacular it all is in the summer, but I love how empty the streets and restaurants are in off-season.  Numerous 4.5 star restaurants are nestled into the palace’s narrow walkways and you can have a full 3-course meal with drinks at every course for around $30 a piece.  The bars and night clubs are also hopping on the weekends, so there’s still plenty of energy in this town.

Below are some pictures from the first few days here…