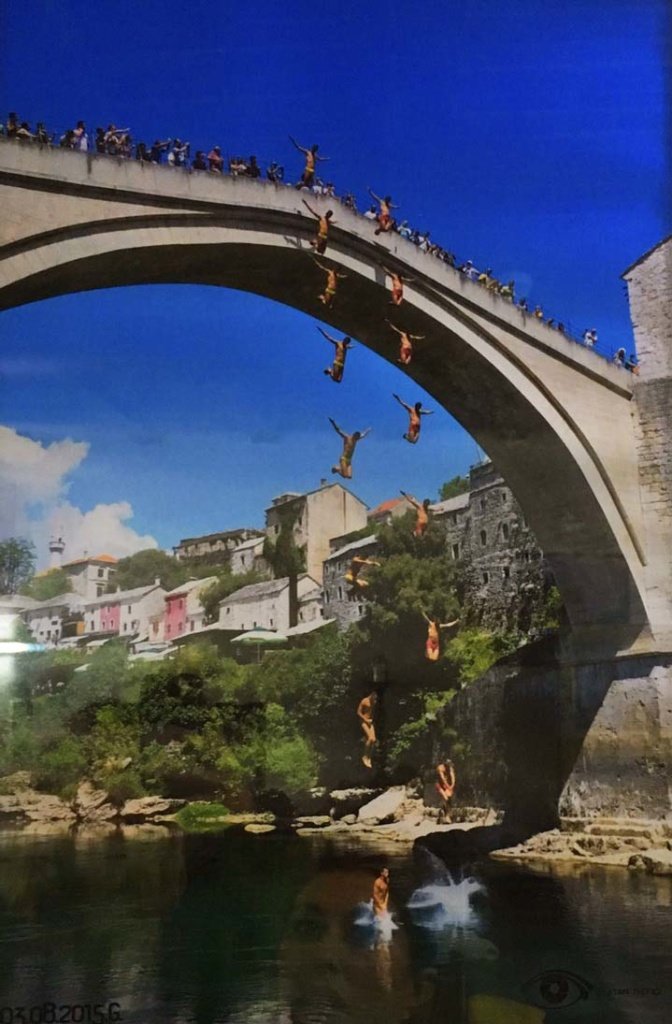 A photo from the Diver’s Club: the perfect way to jump

Let’s jump 75 feet from a perfectly stable bridge into 46-degree water below, in mid-November, shall we?  My friend Kara and I stopped by Mostar, one of the oldest cities in Bosnia and Herzegovina, located in the Herzegovina region (southern part of the country), and stopped by one of the biggest attractions in the Balkans:  the Stari Most.  Stari Most means Old Bridge and Mostar comes from the word for bridge keepers: Mostari.  The Old Bridge was built in the 16th Century by the Ottomans, destroyed in ’93 during the Croat-Bosniak War, and rebuilt with the help of foreign aid in 2004.  Jumping from the bridge was a rite of passage for Bosnian men, some say.  But it took until 2012 for women to start participating when 2 Australian comedians, Hamish and Andy (followed by a TV crew for their televised gap year), jumped off the bridge making it a must-do for adventure-seeking tourists globally.  Only 5 women had taken the plunge prior to the recorded comedic duo’s launch from the bridge on that warm summer day.  Since then, the number has skyrocketed to something like 100 (versus a couple thousand men [recorded names started in 2004 with the rebuilding of the bridge, but jumping from the bridge had been a Bosnian custom since the beginning]) and we were looking to add our names to the list.  But imagine jumping in mid November, on a rainy, cold day, without any spectators to cheer you on, or the promise of a hot rock to relax on after the freezing plunge.

We spoke to Donny (pronounced Johnny) at the Divers Club, located in one of the towers bookending the bridge.  Donny trains all would-be jumpers for a fee of 25 Euro.  After the initial jump, the jumper becomes an official member of the Mostar Diver’s Club, and is welcome to jump for free any time they’d like.  Tempting…

‘This year?’, asked Donny.  ‘No, only those from pub, with ego and no training… you know, late night.  That’s a problem.’   He went on to say that one trained girl did get injured after she stepped first, instead of falling chest first off the bridge.  (See above photo of two jumpers following through with the perfect jump.)  By messing up the launch, she didn’t hit the water perfectly, resulting in a broken nose.  ‘She was nervous, which may be part of problem, too,’ he added.

We looked at each other and decided we’d need to think about this before making any commitments.  Maybe  we’d add our names to the Diver’s Club roster on our next visit to Mostar…

The town of Mostar is surrounded by hills, much like Sarajevo, which is where we were headed via rental car.  The old town resembles a hobbit village with cobble stone streets of large, raised stones (very slippery in the rain), old slate rooftops, and adorable shops selling trinkets, handmade slippers, rose hip jam and honey.  The restaurants advertise the local food of meat assortments (a lot of veal in this area of the world), bread (the best I’ve ever had) and Bosnian coffee (pretty much Turkish Coffee, served in narrow copper pots to help avoid releasing the fine grounds).

I recommend visiting Mostar on a hot summer day to take in the local custom of jumping from Stari Most, followed by a warm and hearty Bosnian meal and coffee.  I’ll be looking for your name at the Diver’s Club on my next visit.