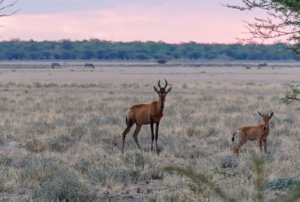 A red hartebeest wandered onto the the airport highway as I drove back to Windhoek.  I slowed down the truck and smiled, imagining the cars behind me with passengers new to the country grabbing their cameras at the sight.

I was no longer grasping for my own camera after having lived among these beautiful creatures for months, but I still looked on in fascination.

3 weeks had passed since I left Uukwaluudhi Safari Lodge (pronounced ew-kwa-loo-dee and otherwise known as Uukwa) in NW Namibia, my home for 2 months.  Thanks to ‘Workaway’, I had a job at the lodge managing staff, maintenance, web design, guest arrivals and departures, and assisting with anything else the owners needed. 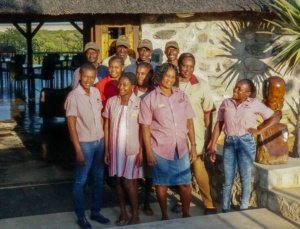 Uukwa staff in front of the main lodge

1 month into living there (everyone lived onsite- similar to most lodges in Namibia), the manager left- leaving me in charge.  I had help from the owners who checked in via phone from the Namibian capital of Windhoek every day, and also from the other staff who had been there for years, but it was still a heady experience being in charge of a large property, a business, and the oversight of nearly 1,000 animals.

We had herds of zebra (probably 250 or more), 20 giraffe, 30 eland (the largest antelope), 15 kudu (possibly the prettiest antelope), close to 400 springbok, at least 100 oryx, 30 red hartebeest, and the list could go on.  All of these animals had been either fenced in when the land trust was first established, or brought in over the years depending on what the land could handle.  And then, of course, there were the other animals that we didn’t bring in, but naturally inhabit the Namibian landscape:  hyenas, warthogs, aardvarks, jackals, owls, eagles, kori bustards (the heaviest bird that can still fly), vultures, etc.: the cleaning crew that helps keep the cycle of life in balance. 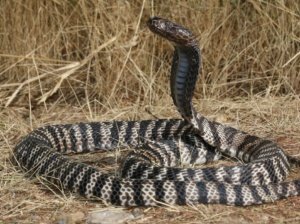 We apparently had snakes galore (the staff was terrified of them), yet I never actually saw one the entire 2 months I lived at Uukwa- not that I didn’t look.  I was sufficiently scared from day 1 by stories of the venomous snakes like the spitting zebra cobra snake that flourished in this dry environment.  Stories included amputation (if you survived the bite at all) since there was no cure for this particular flesh-rotting venom.

I really like snakes, but these stories could make anyone scared.  My little screened-in chalet had sliding screen doors that sometimes opened with the wind, and apparently zebra snakes have a penchant for the indoors.  They could be found (I was told) curled up under a pillow or blanket, just waiting to be startled during a nighttime bathroom break.  I learned to prop a chair in front of the door to prevent it from sliding open and walk with a cellphone flashlight at night.  Still, those first couple of nights were sleepless; the simple flapping of a tarp sounding like a snake in my room.

After a week had passed with me sufficiently terrified of the dark and snakes, I realized I needed to get a grip.  Had anyone ever been bitten by a zebra snake?  No one I met could admit knowing a single person who had been bitten.  Searching on the internet, I could only find one sad fatality of a 2-year old boy that had made the papers last year.  Fatalities were not common, nor were the bites themselves (these snakes are shy and will usually warn an intruder or get away before striking).  Even the information on the anti-venom was disputable.  I later discovered, to my shock, that the staff was just as afraid of geckos and lizards as they were of zebra snakes due to religious beliefs.  I still checked under my pillow and bedspread every night, but I lost my unbridled fear once I realized (or at least convinced myself) that the stories were pure exaggeration.

Activities at the Lodge 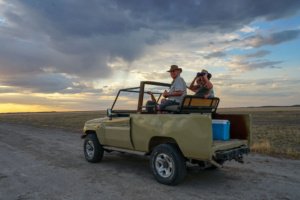 The lodge offered game drives, bush walks, cultural tours and Himba Village visits.  Game drives (safari drives) lasted 2 to 3 hours around sunset when we’d stop for a ‘sundowner’ drink on the plains and watch the colors change in the sky.  In addition to looking for wildlife, we’d tour a dormant hyena den, explaining the matriarchal system (all females outrank even the strongest alpha male) and the hierarchy displayed in the living quarters. 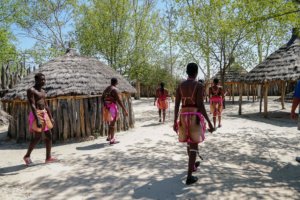 Our cultural tours included visiting the traditional kingdom of the Ovambo people at the Uukwaluudhi Royal Homestead where the king still resides, a visit to where Namibia gained its independence from South Africa’s rule after a 23-year war, and a stop at the giant baobab tree in Outapi… a massive- and very much alive- tree that fit an entire village (35 people) inside it during war time.  Later it became a church, a bar, and a community center. 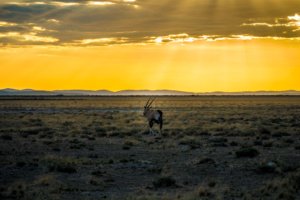 An Oryx on the plains at Uukwa

Uukwa’s main lodge and chalets sit atop a hill overlooking an otherwise flat property.  The air is hot and dry, even in winter, parching mouths and cracking hands and lips.  The mornings are cool, but the sun heats up around 11 and it doesn’t cool down again until sunset at 7:30.  Dust devils spring up and dance along the plains, rain clouds sprinkle on patches in the distance.  It looks like Southern Colorado and parts of New Mexico with desert brush and rocks speckling the landscape, distant mountains lining the horizon.  There were so many similarities, in fact, I started to overlap the two countries in my mind.  We must have barbed bushes everywhere back home, giant beetles, oversized ants, black scorpions, 700ft-deep wells, and 104℉ afternoons… didn’t we?

As I watched the red hartebeest wander off the road to safety, my attention coming back to the present after reminiscing my life out in the ‘bush’, I pressed the gas and headed into the city for my next Namibian work assignment: playing mom to two teenagers for 2 weeks while their parents traveled Europe… potentially the most exotic job yet.