The Great Butterfly Migration to Mexico

The Great Butterfly Migration to Mexico 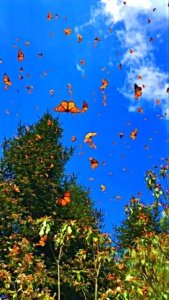 Butterflies in the sky

Click here to view a video of a butterfly swarm

Many of us have heard of the Monarch Butterfly migration from Canada down to Mexico every year at the end of the summer, but few of us get to witness this phenomenon.  Growing up on a ranch in Colorado, the Monarchs would suddenly appear each year in mid-summer and the fields would sparkle with orange wings and the quick motions of larger-than-usual butterflies.  Just as suddenly, our winged guests would disappear as if they had never been there at all.

I grew up knowing there was a great migration to and from Mexico every year by our colorful friends, but I never fully grasped the idea.  These delicate insects (that could be crushed with the swat of a hand) could apparently fly the same distance it would take us hours and hours of plane travel to fly.  These creatures that live only a month or two?  I always thought there must be something wrong with the story that I wasn’t comprehending.

2 weeks ago, I was asked if I wanted to join a group from Remote Year visit the Monarch butterfly’s Mexico location and see where they migrate every year.  So it was true!  I had to witness this for myself.

In August, a large portion of Monarch butterflies to the east of the Rockies make their way south to one region in Mexico (on the border of two Mexican states: eastern Michoacán and the western State of Mexico).  They coast (not flapping their wings) in a southern migration, many from as far north as Southern Canada, along the thermal air waves 3,000 miles, arriving at the end of October to very early November.  At this point, they’re in a trans-like state called diapause, which allows them to conserve energy in a sort of hibernation, and remain in that state until end of January, early February.  (Monarchs are one of the only species who are mobile during diapause.)  The end of diapause triggers the mating season in February.  At that point, the males pass along their lipids (fat cells) along with their sperm to the females and then die in a poetic self-sacrifice.  The females spread their wings and brighten in color: this migratory generation is 34% larger and brighter in color than those in the summer generations due to the diapause (or conservation of fat and oxygen).  Shortly thereafter, she moves north with her kaleidoscope (the official name for a Monarch swarm) and makes it to Texas where she lays eggs and dies herself.  This one butterfly has traveled well over 3,000 miles in her 8-month lifetime.  Her offspring will only live 3-6 weeks, as will their offspring and those to follow.  It will take another 2 to 3 generations before the migratory generation is born in August and starts the cycle all over again.

This amazing cycle of life and internal compass of the butterflies was not discovered until the 1970’s by American and Canadian researchers who had been studying the Monarchs (by tagging and following them) since the ’30’s.  Now the phenomenon is followed closely.  Stories are discussed on major news channels and in nature documentaries.  The small villages that house and lead tourists up to the mountains from Nov-March bank on the influx of money and interest of tourists to keep a portion of this land a preserve.  Both the locals and the future of these butterflies depend on the arrival of a new generation of Monarchs every fall.

Most of the Remote Year group spent a couple of nights with JM Butterfly B&B, but I took the bus up and back in a single day from Mexico City.  It’s just over a 2-hour ride to Zitácuaro, then a taxi to the village of Macheros, and ultimately a horseback ride up to the Cerro Pelon reserve.  We left the city at 7am and returned at 7pm.  The spectacle of the millions of Monarchs clustered together and hanging from trees, in what looks like bags of dead leaves, comes alive when the clouds shift and sunshine warms the kaleidoscope.  See the photos below (and video above) of the Monarchs animatedly greeting us. Some people cried, others got on their knees, but we were all spellbound.