That Great Ocean Road: Continued travels through the Land Down Under

That Great Ocean Road: Continued travels through the Land Down Under 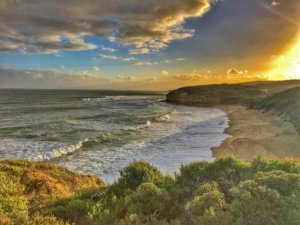 In the final scene from Point Break (Keanu Reaves’ 1991 blockbuster film about an undercover FBI agent tracking bank robber surfers), Patrick Swayze is released from handcuffs to surf a 50-year storm’s monstrous wave (a suicidal ride for the time).  I remember, at 13, being in awe when I heard that the scene was supposed to take place at Bells Beach in Australia.  It just sounded cool.  Little did I know, I’d one day be standing above that beach watching surfers in the water- one of the many spectacular surf breaks along the coastal route known as ‘The Great Ocean Road’.

Surfing is a major part of the Great Ocean Road with its world-famous surf spots speckled along the route’s 241km length.  Glance over your shoulder as you drive around cliffs, coves, and mountains, and you’ll catch surfers cutting up a wave’s face or waiting for their next ride.  The Australia National Surfing Museum is a popular stop in Torquay, where the road ‘starts’, and Rip Curl hosts the oldest pro surfing championship in the world here at Bells Beach.

But surfing isn’t the only important detail about this great road.  It was constructed (mainly by hand due to the terrain) by the servicemen who returned from WWI as a memorial to their fallen comrades.  It’s the world’s largest war memorial, the 3rd biggest tourist attraction in Australia, and an incredible engineering feat.  Started in 1920 and completed in 1936, the road is a global phenomenon from a scenic perspective, but also as a building accomplishment.  Now, over 23 million people visit this coastal roadway every year, awestruck. 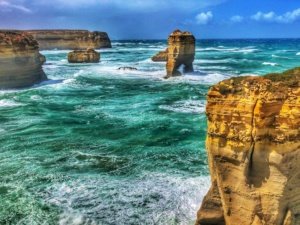 If you’ve seen photos of the Great Ocean Road, you’ll know why it’s a popular tourist destination.  Standing alone out in the roaring sea are sandstone rock formations facing a coastline of windswept cliffs.  Off-white natural bridges and arches stand out against a frothing blue sea.  The layout changes almost daily with cliffs crumbling, islands disintegrating, and bridges collapsing.  One natural bridge, called London Bridge, ironically, collapsed in the 90’s with 2 Japanese tourists stranded on the remaining isolated island, a 10 story drop to the ocean below.

The coastline winds itself along the sea with an alternating landscape of dense forest, dry grasses, and farmland.  I did the drive with two close friends from Remote Year who were able to speed up their Australia tour and meet me in Adelaide for the 12 hour journey to Melbourne along the coast.  We stopped to see as many major sites as we could fit into our schedule while rushing to catch a flight I had 2 days later to Tasmania.

My friends, Robby and Lorien, picked me up in Adelaide as I scrambled to bid adieu to the pets I had been taking care of for 2 weeks house sitting (their owner would return that evening), loaded up a bag of peaches from the tree out front, and locked up the house. 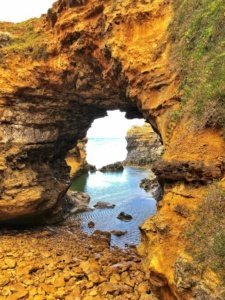 Most would say we were tackling this famous road in the wrong direction as the majority of tourists come from Melbourne, our final destination.  Usually, The Grotto is the last point on the journey, and a site typically skipped as people have had just about enough of Australia’s natural wonders by then.  But for us, this was our first real stop so we were pumped with anticipation.  Not surprisingly, we were blown away by this first site’s beauty (in addition to almost literally being blown away by the wind, which was clocking around 50mph that day), a feeling that would become all too familiar on this coastal stretch.

The Grotto itself is a sinkhole where limestone cliffs have collapsed at different heights and formations.  As you walk down among the massive rock formations towards the crashing ocean waves, you pass a blow hole and then arrive at a perfect circular hole in the limestone to view the churning ocean ahead. 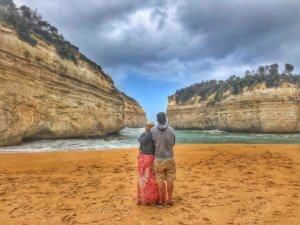 Lorien and Robby at Loch Ard

Further down the road, the London Arch is a huge stone arch out in the water.  This is the stand-alone island that had been attached until the collapse of the natural bridge (London Bridge) in the ’90’s.  Loch Ard Gorge is next, marked in remembrance of a shipwreck- fitting since this area is known as the Shipwreck Coast.  The story goes that there was a Clipper Ship (with the words Loch Ard engraved on it) from England which wrecked just offshore.  Only 2 people survived: 17-year old Tom and 15-year old Eva, who swam to shore for help.  The peninsula cliffs are named after them (wind and water took down an arch that connected them recently).  Eva lost her entire family on that ship from England and shortly thereafter made the journey back home, alone. 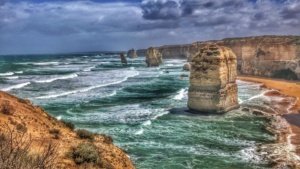 The 12 Apostles were the reason I wanted to do this drive.  The view of the limestone stacks out in the water (8 now instead of 12) is heart stopping.  The wind was so ferocious when we arrived, we had to walk at an angle to make any progress.

Buses of Chinese tourists (it was Chinese New Year we discovered) stopped and unloaded as the paths were flooded with people trying to get the same shots we were.  Wind blew hair and scarves, people held onto railings or friends, but all of us were unanimously smiling.  The scenery was breathtaking and well worth the trip.

Our journey continued on down the coast towards Melbourne, finally hitting Airey’s Inlet, Bells Beach, and Geelong.  When we got to Airey’s Inlet, we were impressed by the wealthy homes and architectural anomalies dotting the sides of the road, ostentatious wealth we hadn’t seen up until now.  One house (or potentially just a large party room) sat on a single stilt connected by a bridge to a main house on a hill.  We must be getting closer to Melbourne, we thought. 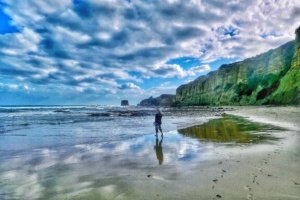 Me and reflections at Aireys Inlet

Driving off the main road to the beach, we peeked at a famous white Lighthouse on a cliff and walked down a path to a cove where surfers were coming out of the water.  The ocean became a perfect mirror and time seemed to stop.

The sun was setting as we neared Bells Beach, the water glassy and filled with expectant surfers watching the small and even sets, a perfect finale to our tour.

We spent that night in Geelong, a mini less-expensive version of Melbourne with a university, just an hour away from its big city neighbor.  Street Art and stylized graffiti covers walls in the hip downtown area with small restaurants and bars set on cobble stone streets.  Everything is new and clean, but trying for that hip London look with scratchy graffiti, alleyways and rows of brick buildings.

We spent our last night, Valentines Day, eating dinner at a southern chicken US franchise ‘Hot Chicken’ that had made its way over here, and filled our quota of chocolate for the holiday at ‘Armageddon Cake‘ down a side street.  I’d soon be saying goodbye to my friends and heading off again, this time to Tasmania for a colder, even more rugged landscape.

Turns out, the filming location for the final scene in Point Break was Cannon Beach, Oregon, not Bells Beach, Australia- just a slight difference of 17 time zones and a few degrees.  If you had to pick anywhere to look like Bells Beach, though, the Oregon coast with its rock cliffs and similar ‘haystacks’ (as they call them in Oregon) set in turbulent waters is a perfect alternative.

If you do make it over to this part of the world, The Great Ocean Road is a spectacular sight to behold: majestic, tumultuous, and yes, indeed great.