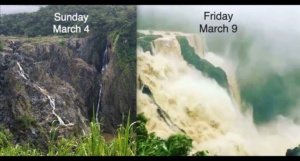 Before and After Barron Falls

It had just rained torrentially for 5 days straight in Cairns, Australia.  Even for a rainforest’s standards, the volume was record-breaking.  The Cairns Community Facebook Page was overloaded with locals posting before and after pictures of fields, highways, and parks under water.  The waterfall above a major Hydroelectric power plant (2 miles from me) looked like Niagara Falls.

This is the gateway to the Great Barrier Reef and Daintree Rainforest in Northern Queensland.  I happened to be house sitting here for 2 weeks: watching a chocolate lab named Bailey, a mix-breed blonde hunting dog named Molly, and a kitten named Asha.  We were living in a beautiful log cabin 20 minutes out of town in the rain forest.

Up here, there were no crocodiles (supposedly).  “Go ahead and swim in the river, the crocs don’t like the colder water up this high.” the home owner, Davina, told me.  “Oh…okay…” I said nervously (pretty confident I wasn’t going to test it out).  I had been warned about crocodiles in this area from places farther south in Australia that didn’t have them.  “Don’t go into any water unless it’s a manmade swimming pool up there,” I had been warned.  “The ocean is teeming with crocs, as are the rivers.  Don’t take a chance.”

Out my backdoor was the Barron Gorge National Park with remains one of the oldest rainforests on earth.  I was surrounded by mountains covered in lush tree growth.

After being cooped up inside for multiple days straight (cars were stranded from getting caught in rivers of water on the highways), the weather finally broke, the water began to drain, and the sun came out.  I took the dogs on a circuit of off-leash areas so they could work off some of their cooped-up energy.  We went to nearby beaches, our local dog park, and a recommended area further out beyond the sugar cane fields, near horse farms.

Bailey, Molly and I pulled up alongside the same river we had been visiting in our local park, we were now just farther upstream.  It was fully swollen with water flowing as high as the base of the concrete bridge that crossed it.  There must be a cistern underneath it to let the water flow through, I thought distractedly.  I walked with the dogs over the bridge and then realized Bailey had jumped into the water after a stick and was swimming back towards me still on the bridge.

Suddenly, I heard a loud sucking sound and immediately Bailey was gone.  There was a whirlpool sucking debris under the bridge with a terrific force and he had been caught in it.

I panicked, looking back and forth to either side of the bridge, waiting for Bailey to appear after having been sucked through.  I dropped my bag and froze in panic, waiting and helpless.  He wasn’t appearing on the other side of the bridge.  Seconds turned into thirty seconds.  I was down on my knees with my arm under the bridge to see if I could feel him underneath to pull him back out, but the suction was too strong and I felt nothing but water.

I jumped up, trying to think logically as the seconds ticked by.  If I called for help, it would waste precious moments.  There was a child in the far distance riding a bike down a rolling path.  The sound of a car motor faded away.

I looked back at the rushing water to the bridge and then on the other side of the bridge.  No dog.  There must be a grate underneath the bridge!  He must be caught on the grate!  Horror overcame me and increased the panic.  Logically, if I jumped in after him and there was a grate, I would probably drown.  And the realization that he must have drowned (or be drowning) overtook me in a sickening fear.

All of a sudden, as if in slow motion, Bailey’s lifeless body buoyed to the surface and began floating downstream, on the other side of the bridge.  A rush of relief that he could be saved flooded me and I jumped in after him, swimming with him along with the current, he in front of my body.  One arm circled him in a hug as I kicked towards the shore.  My arm hit a sand/debris pile where I could pull him up out of the fast-moving current and get us closer to the bridge.  With all my might, I pulled the front of his body, head and front legs up onto the bridge, cutting my hands on the sharp corroded metal of the jagged edge.  I lifted his hind legs up in an almost angry force, desperate to save him.  His eyes opened slowly and a small breath of air came out of his nose.  Hallelujah, he’s alive!

Over the next few minutes, I encouraged Bailey to breath while petting him, his eyes half open.  Larger breaths came followed by a cough, but he never threw up the gallons of water I was expecting, like in the movies.

I eventually got him up to walk slowly towards the car, still thinking a mile a minute about our next move: the vet.  I helped him into the back of the car, lifting him up onto the seat folded forward.  Molly all the while was happily tagging along as if nothing was wrong- probably a good thing.

I shakily held my phone, trying to get service and see where nearby vets were located.  No service.  I eventually gave up and started driving towards civilization, looking behind me in the backseat every 30 seconds to make sure Bailey was still alive.

When the phone did show bars, I located a nearby vet on the map… only to arrive and realize it was closed.  It was after 6, they’d all be closed.

I decided the best thing to do was to get home and call the emergency vet number.  Driving around wasn’t solving anything and I was wasting time.  He was breathing, but exhausted.  I had never been in this situation before and wasn’t sure the ramifications.

After speaking to the emergency vet hotline and then calling the reassuring home owners Davina and Jen, both paramedics and the absolute best people to talk to in this scenario: calm, understanding, and encouraging (amazing, wonderful people who I grew to feel were long lost friends of mine).  A paramedic friend of theirs stopped by to check Bailey’s breathing and reassure me that he should be okay through the night, but to keep an eye on him (vomiting bubbling liquid was a sign that something was wrong- at which point I could rush him to the 24-hour vet hospital).

By morning, Bailey was running around, begging for food and as dopey as ever.  He was back to normal.

There’s nothing like having the near death of an animal who you love (never mind one that doesn’t belong to you) shake you up.  Goofy, laborious, always hungry, but one happy and loving dog… this was Bailey.

On a side note, Davina was right after all- there were no crocodiles in this river.  Thankfully, someone was looking out for us that day.