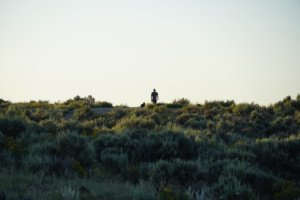 There’s a dress code in Taos, New Mexico: it’s called wiping your boots on the back of your jeans if entering a fancy restaurant.  I arrived here two days ago, but I’ve already decided this is my kind of place.

Artists, hippies, ranchers, eastern religion gurus, intellectuals and ski bums all convene peacefully here, just down the road from the true natives in Taos Pueblo (the oldest inhabited Native American pueblo in the world) and the real reason for the original Taos art movement of the 1800’s. 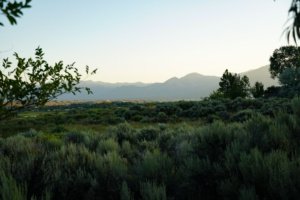 View from my adobe home in Taos

I’m staying in an adobe home just a few miles out of town where the sounds of wind chimes, the smell of sage brush, and the various shades of green and brown are familiar.  The vertical rise of the Rocky Mountains, as well as this odd mix of cultures, reminds me of where I’m from, just 2 1/2 hours north along the Sangre de Cristo mountain range- a skeletal backbone that runs south from Poncha Pass, Colorado to southeast of Santa Fe, New Mexico.

Like Taos, Crestone (a small Colorado town not far from where I grew up) sits along this range and claims to have a spiritual vortex.  Back in the day, Native Americans performed vision quests there.  Today, people from eastern religions, seekers of all types, and artists- both the bizarre and the beautiful- congregate to feel the supposed intense energy.  Tattered but colorful Tibetan prayer flags flap in the wind while cows call out from fields; oddly, tame deer have to be shoo’d off the roads.  Spiritual life, artist life, and agricultural life collide.

Maybe it’s being in a similar ‘vortex’, but staying in Taos this week has brought back many childhood memories.  One particular memory was of our first visit to a natural hot springs just north of Crestone called Valley View.  Like Taos, Crestone and Valley View were full of hippies- a childlike lifestyle that welcomed anyone who was open minded.

We had moved from Philadelphia just a month or two earlier, had a friend visiting us from home (a bond trader like my dad), and visiting a hot springs sounded like a good excursion.  At the time, we were oblivious to anything outside of the area’s agricultural community.  We all grabbed our swimsuits, crowded into the Jeep Cherokee, and drove on a dirt road up a towering mountainside overlooking the valley.

After rumbling over a cattle guard, a homemade sign signaled us to stop and wait for an attendant.  We could only see some huts and a cluster of trees at the entrance, and in the distance a deep scar from a long-abandoned iron ore mine.  Someone came out eventually from an adobe mud hut with mismatched curtains in the windows.  We paid our per-person rate, less for us kids, and continued to drive up the dusty road to the parking lot as the attendant called after us “And just so you know, clothing is optional!”  We had no idea what he meant, but would soon find out.

When we approached the main pool, we slowly noticed everyone was in their birthday suits.  People were having conversations in the nude just like they would if fully dressed.  Afro-like pubic hair was on full display, for both genders, and sagging parts seemed to be perfectly natural (and rampant) for all adults. Everyone walked in the open, swinging.  My brother and I (ages 13 and 10) tried our best to look at our feet and cover-up our snickers, but we were howling inside.

The main pool was large and rectangular.  It had a natural bottom made of rocks and plant life, and it was being fed from cascading pools that could be found by hiking up a rocky path farther up the mountain.  Sure to its claim, the water was surprisingly hot.

We awkwardly swam past people doing water yoga and walked past others laying face-up on chaise lounges in the sun.  Everyone was naked. Unable to keep straight faces at the ‘family pool’, we made our way up the mountain to the other pools, each getting smaller as we got higher.  Around every bend was a surprise.  In some pools, two people were getting intimate, in others, three.  In one instance, a group was hanging out like they were hosting a book club.  We finally made it to the highest (and hottest) pool that was essentially a small waterfall, and agreed that it was finally time to take us (and our bathing suits) home.

So this is what I think of as I take in a familiar and beautiful Taos: my 10-year-old discovery of our neighboring hippie communities. 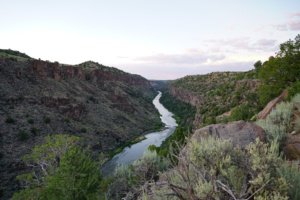 While here, I’ve explored art galleries, spoken to professional photographers, driven up to Taos Ski Valley, and hiked to a stunning mountain lake.  I can’t help but check out a natural hot springs accessible by hiking into the Rio Grand Gorge.  It’s sunset and the natural hot springs pool is right next to the fast-moving Rio Grand River.  The path is empty of other hikers, the naturally-formed rock pool vacant.  And as the sun slips behind the desert, I decide- in memory of old Valley View- to slip in ‘au naturel’…