Sydney: My first week in Australia

Sydney: My first week in Australia 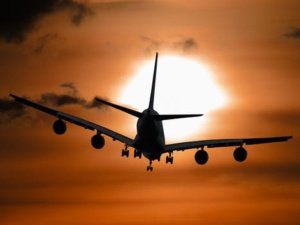 A Trip to Sydney

After traveling 53 hours to get to Sydney, Australia, you could say I took the scenic route.  With an unexpected 12 hour layover in LA and a route that took me up over the the Arctic Circle and into Shanghai for breakfast, my inexpensive coach ticket to Sydney airport was a nearly 3 day excursion.  It sounds brutal, doesn’t it?  I feared that trip for almost 6 months in anticipation.  But I have to say, I was pleasantly surprised.  I almost enjoyed the solitary time to catch up on books, writing, and a few Sudoku puzzles.  Following a year of travel days with 70 millenials on Remote Year, this was nothing.  I was in a great mood when I touched down in Australia… my 40th country to date and my first new continent (6th out of 7) since 2005.  I felt so good, in fact, I was sure I was going to avoid jet lag.

I had been very close to leaving Sydney as soon as I landed, off to discover the outback as quickly as possible.  I’d been doing cities for years, I wanted to see the wildlife!  But plans changed and I wound up getting a house sit in the suburbs of Sydney for the first week- a perfect setup for easing into international living again and checking out a city I knew next to nothing about.

I now know why Sydney is one of the top 15 most visited cities in the world: it’s beautiful, clean, safe, and modern.  The weather is a lot like Los Angeles, but with more rain in the winter.  It’s lush, has world class beaches just minutes from the downtown, sports easily accessible islands by commuter ferry, and has pretty much anything you could want in a city, including outstanding parks, beautiful bridges, top street performers, excellent restaurants, and terrific public transportation.  The only trash I saw from a raucous New Year’s Eve party (their most famous annual bash, kicking off a night of debauchery for the rest of the globe) was a few empty bottles left on an otherwise clean train.  Streets and parks had been properly swept and the harbor sparkled turquoise blue.  What 1.5 million person party?

I thought I knew what jet lag was, but I hadn’t a clue until I jumped 16 time zones backwards.  Initially, I felt amazing when I got off my flight and walked through the Sydney airport at 10am.  I greeted my home owners at the airport, gave them hugs, and received a set of keys as they made their way out of town and I made my way to their house in the ‘burbs.

After getting to my new home, I walked the dog and then went for a walk to the grocery store to orient myself.  A mile walk turned into two, and suddenly I was in a weird, disorienting bubble.  Looking at my GPS map on my phone, I tried to gain my bearings, but had gone way off the map and had to retrace my steps.  I started to feel like I was walking through thick mud; every step was an effort.

Luckily, I made it back to my house safely (after numerous wrong turns) and passed out cold at 7pm.  So this is what real jet lag is like: zombie land.  I was in this state at random times of the day for a good 3-4 days before I started to feel normal- or at least until the typical tired jet lag feeling that I had been expecting settled in. 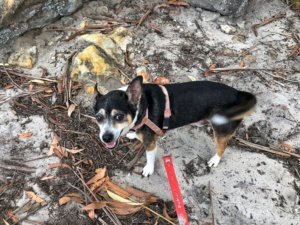 Roger was my pet for the week.  He looked like a cross between a Jack Russel and a Chihuahua, and was adorable.  He could be off the leash when we were hiking through the brush land (which our house looked over, the roof at the same height as the palm and gum tree tops), but I often let him off leash in our sleepy neighborhood.  He’d bound along beside me and follow scents like it was his job.

My new home had a 70’s treehouse like feeling with balconies and windows overlooking the ‘Rampart’ (or ravine of forest and rivers) below.  While we were a couple of miles from the nearest grocery store, cutting through paths in the bush area shortened the walk to a little over a mile each way.  The constant walking to and from the grocery store with my side-kick, and to and from the train, was a great way to get over the jet lag.

Koalas Down the Street 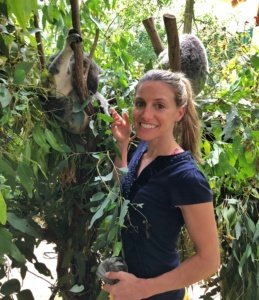 Me at the Koala Sanctuary

It’s not every neighborhood that has a Koala Sanctuary, but my neighborhood in Sydney did.  There were supposedly koalas abound up in the trees around the sanctuary, but the ones I got a good look at were at eye level, passed out in a bush.  (Apparently, the eucalyptus leaves they eat are not only their main food source, but also a sedative.  If they’re not eating, they’re sleeping.)  Other kids and I were encouraged to pet the soft, adorable animals (who consequently are not bears at all, but marsupials).  Their fur is like deer fur- and what I’d later come to know as kangaroo fur, too- almost like soft grey feathers.

Wallabys bounced around their acre or so cage and the larger grey kangaroos were in the petting zoo, greeting visitors with curiosity.  Japanese tourists were lined up to get a picture with one arm around a kangaroo.  I shared my apple with 2 very happy kangaroos who clutched the remaining core with their 3” talons and looked up with soft brown eyes.

Echidnas were another funny discovery.  Looking like porcupines, but really ant eaters and marsupials themselves, they walked up and down the side of their cage looking for something specific, clearly on a mission.  Dingos look a lot like huskies, not Australian herding dogs like I had expected.  Their cages warned they would bite, but it was hard to envision them as purely wild as they looked like regular domesticated dogs.

Cockatoos and Rainbow Lorakeets were sadly in cages, too.  These tropical birds are as common as sparrows here in Sydney.  Cockatoos make a loud screeching sound (a lot like the macaw) and despite their beauty are not favored by their local neighbors.

Since I was a little over an hour out of the city (sometimes 3 if I were going to beaches in the north), it would turn into an exhausting daily trek, but I did make it into the city for 5 of the 8 days I was there.

On New Years Day, a Monday, I headed in for the Free Walking Tour (imfree.com.au) and toured downtown from Town Hall to Circle Quay (the main ferry wharf).  I learned a lot of the Australian history I hadn’t been aware of before. Namely, Captain Cook sailed upon the continent (near Sydney Harbor) in 1770.  He didn’t see many Aboriginals, so declared it a British Colony and staked a flag.  18 years later, they had decided to make it a penal colony- this I always knew- but for petty theft, not major crimes.  The convicts, mainly book-stealing thieves (some as young as 14), were being used to build and settle a new commonwealth.  They were the settlers, free to roam, build and create a community, as long as they stayed in the Sydney area.  Once their sentence was served, they were allowed to return home… as long as they could pay for their own way back.  Of course, no one had money (or any way of making money), and getting back to Britain was next to impossible.  Instead, they were given a parcel of land and encouraged to build- they weren’t going anywhere.

Sad stories like the Aboriginal boy named Barangaroo, who a section of downtown is now named after, was kidnapped, cleaned up and clothed, then taught English and sent back to England to be put on display.  He became the main translator between the two races and taught the British about the Aboriginal culture.  Unfortunately, he wound up being rejected by his own people and never felt truly at ease with the whites.  Barangaroo drank himself to death and died alone.

Sydney was known as Little London and much of the city is named with quintessentially British names: Hyde Park, Darling Harbour, Royal Botanical Gardens, Royal National Park, Saint Mary’s Cathedral, George Street, the Queen Victoria Building, etc.  In fact, it wasn’t until the turn of the century (1901) that Australia gained its independence and started to proudly name things uniquely Australian.

Also part of the city are the famous Bondi and Manly Beaches.  Cliffs, rock formations, hills, Australian Pines, coves and bays, white sand, and clear greenish-blue water create the erratic coastline that fans out like a broccoli stalk.  Swimming, surfing, and being a life guard is a major part of the Australian culture.  In Sydney, there’s no excuse- water access is everywhere.

Despite being one of the most expensive cities in the world, there are ways to explore it inexpensively and still see what all the fuss is about.  Walk the Harbour Bridge instead of doing the $400 Harbour Bridge climb, take the commuter ferries island hopping instead of paying for the tourist ferries, and simply walk.

Do the free walking tour, walk around the Sydney Opera House, and explore the Royal Botanical Gardens.  The gardens are free and one of the most beautiful displays of landscaped nature I’ve ever seen, with hidden walkways, ponds, and overgrown trees and flowers.  You’ll feel lost for a moment, in a tropical forest, then see the top of the skyline around the next flower or bush and are quickly reminded you’re in the heart of a major city.  This is a city to be appreciated outdoors and at your leisure.  (One impressive thing to note is there are clean and modern public bathrooms everywhere- subway stations, ferry terminals, street pavilions.  I’ve never seen such nice bathrooms in subway terminals.)

Australians are known for their travel expertise and being able to withstand 10+ hour flights like they’re puddle jumpers.  But with Sydney’s great wildlife, cleanliness, beach life and weather, it’s hard to understand why they bother going anywhere.