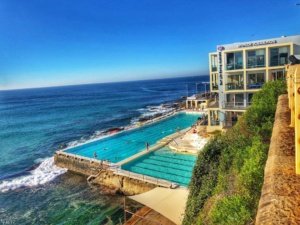 The iconic Bondi Iceberg Club is an ultra white 4-story rectangular building built into the cliffs of Bondi Beach in Sydney, Australia.  Light blue ocean waves pound the cliffs below and naturally fill up an olympic sized pool which gets drained, repainted, and slowly refilled once a week.  The top floor of the club is known as the Icebergs Dining Room and Bar, a world-renown celebrity hangout opened in 2002 exhibiting an entire wall of sliding glass to take in the view. 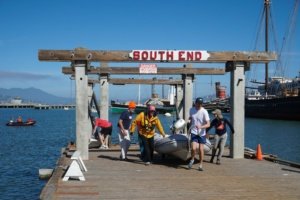 Conversely, the South End Rowing Club (SERC) is housed in an 1864 wooden building with flaking white paint on Fisherman’s Wharf in San Francisco, California.  The rugged docks lead out to old sailing vessels resting in the opaque waters of Aquatic Park where, when the fog lifts, you can see Alcatraz and the Golden Gate Bridge.  The cavity of the building is mainly a boat shed which stores 100 year-old wooden rowboats and Whitehulls, fiberglass racing shells, kayaks, and zodiac rescue boats, but it also houses handball courts, showers, an old wooden bar, and an industrial kitchen with picnic tables set up inside.  You probably won’t see Paris Hilton making an exit from here anytime soon.

If you were to study the two clubs, one looking out over Sydney’s yellow-gold sandstone cliffs onto the shimmering teal water of the South Pacific, the other facing a turbulent San Francisco Bay and former prison island, you may wonder if they have anything in common.  One club makes regular international headlines with presidents and the Kim Kardashians of the world walking into its stark white penthouse restaurant.  The other may make the local news hosting a casual swim from Alcatraz, a rumored shark epicenter.

What do these clubs have in common?  The members range from the semi-cautious to the extreme adventurous, young to old, muscle-ripped to beer-drinking-fit.  Whether they’re in a penthouse sipping martinis or on a zodiac heading out to swim a mile in the rain, they generally wouldn’t want to be anywhere else.  The two venues also happen to be international sister clubs alternating annual visits and swimming events since 2013.

This year marked the clubs’ 6th annual visit, and it was San Fran’s turn to cross hemispheres.  After flying 7400 miles in about 16 hours, the South End crew landed in Sydney on May 1st: a record 26 members had arrived.  (Wanting to see my brother who’s a SERC member and swim in the events myself, I took a 3-hour puddle jumper from New Zealand to meet them.)

The mascot for the Bondi swimmers is an iceberg, but the coldest the water gets off of Sydney (61℉) is the warmest you’ll experience back in San Fran.  It was around 68℉ that week, or described as ‘bathtub water’ by the South Enders.  That’s not to say swimming in open water off of Sydney is easy, though.  SF may have the colder water, but each club has their own dangers.  Here in Sydney they have Bluebottles (or Portuguese Man-O-War) which can level even the largest of men with a brush from a tentacle, great whites, bull sharks, and strong rip currents which regularly take tourists’ lives (see Bondi Rescue, their reality tv show on the matter). 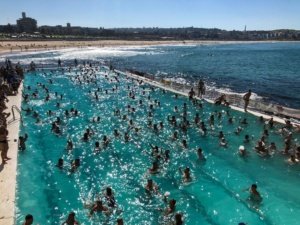 This was the Iceberg’s Winter Swim Opening Weekend, however, and the swimming commenced immediately.  Group swims and races were held across Bondi Beach’s cove and from nearby beaches back to the club.  But the main event, on a day that was at-capacity for the club, members walking around in speedos and bikinis in 50 degree weather, had its members jumping into the pool with giant cubes of ice prior to pool races- a club tradition.

The SERC sister club members were honored guests for the week, given annual memberships, shirts, hats and scarves to solute the start of Sydney’s mild winter.  Nightly events brought bands to the club following afternoon barbecues.  And even though a few of the visitors left Sydney to see other parts of Oz, they rushed back to maximize time with their newly extended family. 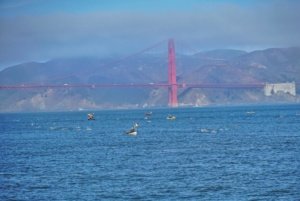 There’s something about both swim clubs that encourages a feeling of belonging.  Maybe it’s the fact that the average age is over 40 and their members are kind and wise from maturity.  Or perhaps, like in combat, they may depend on a member someday to get them home safely from a cold, open water swim: they have to be nice, their life depends on it.  Or maybe it’s that cold water shocks them into euphoria: they love everyone, all the time.  But whatever the reason, after spending time in both clubs (having lived in Sydney for 2 weeks in January and in San Francisco for a month last fall), I can easily say both are places where everyone is welcome with open arms.

And it’s not only guests who get the treatment.  Members couldn’t be more inclusive if it were a rule.  Coming from New York City where social clubs are harder to get into than Ivy Leagues (and have even more cliques once inside), this is a refreshing concept.  Both clubs have people who range from blue collar workers to finance execs.  They arrive by chauffeured car, bus, bike, and foot.  But once they get into their one-pieces, bikinis, speedos and swim trunks, they’re all equal.  And they’re all welcoming; it must be contagious.

I spent last weekend in San Francisco photographing the SERC’s triathlon events against their biggest rival: The Dolphin Club.  I sported my Bondi Iceberg bikini and joined in on swims in the 58 degree water.  One day was a serious competition and the next had members in wigs and themed yachting wear riding inflatable rainbow unicorns down the San Francisco Bay.  (On second thought, maybe maturity doesn’t always come with age…)

Bondi Beach and Fisherman’s Wharf may look like opposites from afar, but once you get past the accents and join the members in an open water swim, you’ll be hard pressed to tell them apart.

The South End Rowing Club letting their hair down with Float-A-Palooza: