Sunflowers in the City: Portland, Oregon

Sunflowers in the City: Portland, Oregon 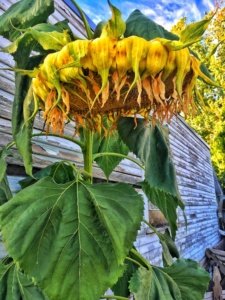 Portland: A sunflower in an alleyway.

Portland, Oregon is where it’s at.  Where else can you find massive sunflowers lining alleyways, roses lining street corners, and city parks with 5,000 or more acres?  Perfect lawns and overgrown front yards will compel you to stop and take photos.  Trees the size of sky scrapers take your breath away.  And the locals are so friendly, you may smile while waiting in a line delayed by friendly chatter.  Portland melted my heart with its beauty in both nature and people, and I (hate to admit) was a little choked up leaving this afternoon.

It probably didn’t hurt that I was house sitting a 3-bedroom bungalow with front and back yards on a tree-lined street within walking distance to parks, grocery stores and restaurants.  It also helped that I was taking care of a sweet 11-month old (and runt of the litter) Belgian Shepherd who became my shadow for 10 days and joined me on a tour of the city.

Due to the fact that I had Chloe, this lovely Belgian, I was forced to research some of the city parks within a 20-min drive.  I was just 10 blocks from Irving Park, which we jogged to a few times a day and played fetch.  We also drove to Mount Tabor (a park built on an old volcano) and Lewis & Clark State Recreation Park (on the Columbia River) to hike above the city for a great view and to play ball in the river.

My two neighborhood discoveries, outside of the famous downtown Pearl District, was Mississippi Avenue and Alberta Street.  Both (quite recently) were streets with abandoned and boarded-up buildings in what had been sketchy neighborhoods.  Due to artists moving in and gentrification, these two streets turned into adorable communities lined with art (including street murals and sculptures), cafes, boutiques, food trucks, restaurants and pet stores.  My stops included Fuel on Alberta Street for a vegan burrito bowl (it was filled with veggies, rice and pesto, and was surprisingly delicious), and The Fresh Pot for coffee and a ginger cookie on Mississippi Ave.  Both spots had outside seating where we could observe the locals.  There was some interesting people watching, including one barefoot woman in a skirt who danced around and randomly dropped into yoga poses (now that’s the kind of Portland I expected).  Almost everyone stopped to pet Chloe and chat and I wound up returning during my stay again and again to window shop and take in the hippie/yuppie scene.

Just off of the US Route 30 going NW from downtown lies one of the largest parks in the nation: Forest Park.  It’s a municipal park with over 5,100 acres of land and 70 miles of trails (27 miles being the longest single trail).  A few of my newfound friends from Irving Park let me know that if I hadn’t been to Forest Park, I hadn’t seen Portland.  With its overgrown Pacific Northwest beauty and panoramic views, it’s a sanctuary for city dwellers.  Luckily, I was able to do an 8-mile run there (up park ranger roads) with my cousin’s wife, Barb, so I got to experience a small portion of it.  Maybe next time I’ll wander the trails through moss-covered trees and see that famous panoramic view of the city.

Portland may take heat for having 8 months of rain every year, but if you can visit between June and October, you (like me) may never want to leave.