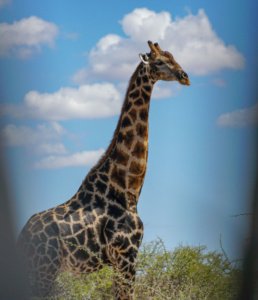 I woke up to the most unusual sound one morning.  It was tapping the mopane leaves and the calcium-rich rocks.  It was bouncing off the chalet roofs and flooding the air like music.  At first I thought it was my giraffe friends who visit every day, stepping around my building with their 16-20ft height, munching on a breakfast of leaves and acacia twigs, and then vanishing their massive 1,750lb+ bodies into the trees like ghosts.  But no, it wasn’t my long-legged friends clicking their hooves on rocks, it was just rain: pure and beautiful rain.

This was my last morning at Uukwaluudhi, and as I finished packing everything I owned into a small roller bag and two backpacks, I looked back one last time at the simple chalet that had been my home for two months.  It was raised in the front on cement feet, lifting itself up from a steep hillside drop-off for a view over the trees and out onto the plains down below.  Sheer white curtains blew in from large screen doors that framed the front view, and mesh windows with rolled-up tent-flaps ran along the sides, opening it up to smooth breezes, hyena laughter, and bird songs.

I pulled my bags out of the chalet and into the 5am darkness, the pleasant feeling of rain soaking through my clothes, then closed the sliding screen doors behind me for the last time.

Unsurprisingly, the giraffe is the tallest animal on earth.  Its massive body is minimized by 6ft-long legs and an even longer neck- though not quite long enough to reach the ground for drinking.  Luckily for them, they only have to drink once every few days (and can go weeks without water, like a camel), but when they do, they awkwardly spread their front legs or kneel at the water’s edge to quench their thirst.

In soft mud, their hoof prints leave holes the size of dinner plates sometimes 6″ deep (for size perspective, their heart alone is 2ft long).  They are vegetarians, but can be found licking a carcass here and there (with their 20″ tongue) for supplements.  I actually found one playing with a bone one day, tossing it in the air and then picking it up again like a dog. 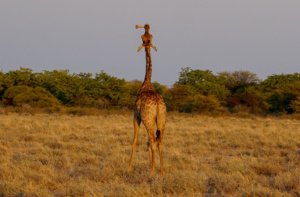 A giraffe at Uukwa sucking a bone

A giraffe’s unique pattern of spots are like fingerprints and get dark (not gray) with age.  They can run 35mph (astonishing for an animal of their size) and, though originally assumed to be mute, can hiss, bellow, and even make a flute-like sound outside of our hearing range.

In Uukwaluudhi, even though we knew they were out there, the sight of a giraffe was always special. 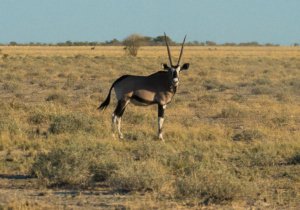 Down at the waterhole dam where I often sat in a hide surrounded by wood, the antelopes would appear first, followed by warthogs and finally the skittish zebra.

We had about 6 Namibian antelope species at Uukwaluudhi, the bully of the group being the gemsbok  (or oryx), Namibia’s national animal.  Short, stocky, and aggressive with their 3ft-long spear-like horns, they push everyone around at the waterhole.  Not long ago from prop planes (as mentioned in my post about Sossusvlei), it was discovered that they travel across desert dunes for days and weeks, en route to water.  They have a tan body, a black-and-white masked face, and a horse-like flowing tale.  But despite their beautiful markings, it’s their horns that will take your breath away. 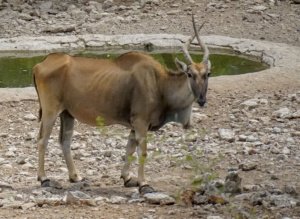 An eland with its horns crossed.

The eland, though an antelope, looks more like the brahman cow with a dewlap and back hump.  They’re massive and easily the largest antelope (some weighing almost as much as a giraffe), but are shy and sweet-tempered- an easy target for the oryx to boss around.  They have tightly twisting straight horns and are said to rival beef in meat flavor and milk nutrition. 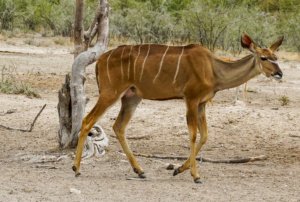 And then there’s the beautiful kudu, which look similar to deer in both their face and enormous ears (though the bulls have giant cork-screw horns).  They are primarily grey-brown with white stripes across their back and a white U across the bridge of their nose resembling makeup (a great camouflage against dappled sunshine in the trees).  Known as the ghost of the savannah, they can jump up to 8ft vertically from a standing position and disappear in an instant. 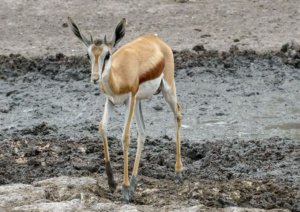 A baby springbok walking through mud

The springbok: small, graceful, and of the gazelle tribe, are in large numbers at Uukwa, traveling in herds of 200 or more.  Slender and long-legged, they look tiny next to the larger antelope- maybe 1/4 the size of a kudu.  They have a beautiful tan, brown and white coloring, and horns that point slightly inwards and back.  The name ‘springbok’ describes them well: they’re known mostly for ‘pronking’ or springing stiff-legged up to about 6ft in the air with their back arched when excited, a white tail flap raised giving off a sweet scent from back glands. 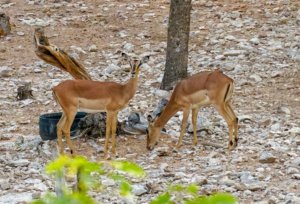 Female black-faced impala at the waterhole

The black-faced impala– small like the springbok, and the bushbuck- the size of a dog- were rarely seen, being so small and well-camouflaged, but are beautiful creatures when spotted. 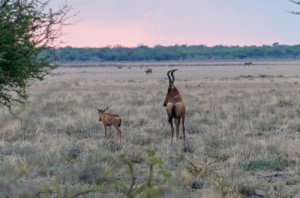 And last but not least, the strange and lovely red hartebeest.  They have a brownish-red color with a white bottom and shorter hind legs.  Some say they’re the ugly duckling of the group with a narrow face and curious horns, but that’s exactly why they’re my favorite.  Their horns look like can openers or baling hooks, a narrow face forcing their eyes close together.  They, too, are sweet-tempered and shy.  (Their horns were worn by Angelina Jolie in the movie Maleficent…) 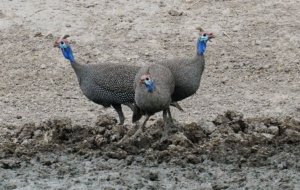 Some animals always got a chuckle out of me.  Namely, the guinea fowl- reminding me of nervous old ladies wearing funny red helmets on top of blue-skinned faces- and the warthog with its 2 sets of tusks and 4.5″ protruding warts.  The warthog raises its head at the slightest noise (their eyesight terrible, but hearing excellent), hesitates, then scrambles- the piglets dashing at top speed alongside the mother, all tails held high like battle flags. 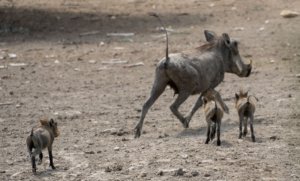 A warthog mother and her 3 piglets

And then there’s the baffling hyena– an animal with a hunchback, loping off into the darkness awkwardly with abnormally short hind legs.  One night, on a drive to spot nocturnal animals, we spotted an aardvark (very rare to see) and then found two hyena cubs in their den who came out to inspect our truck lights.  As much as I’d love to raise one as a pet, the amount of damage those guys could do would be devastating   If you think a chew-happy puppy is bad, hyenas are 100x worse.  Aside from consuming entire animals, bones and all (their poop prominently white to prove the calcium consumption), they devour cameras, electricity boxes, and even walkway lights at the lodge.

I climbed out of the rain and into my ride to the airport.  I was being driven by Neil, my chain-smoking 22-year old coworker who wears many hats at the lodge, fixing everything from vehicles to water mains to refrigerators- on top of being the driver and guide.  He was a saint for having volunteered to drive me to the airport at 5am, but I guess he was the only staff member with a driver’s license and had little choice.  I took a deep breath, trying not to shed too many tears as we pulled out in the dark.

“You know,” he said, “they say if Uukwa really likes someone, it rains the day they leave… it’s like the skies are crying.  Not many people get a rainy departure.”

He threw the truck into first and  we ambled down the rocky hill to the large metal gate.  I hadn’t seen it rain this much in 2 months.  As we pulled out onto the tar road, I looked back through the dark at my beloved Uukwaluudhi, mist coming up from the ground in the red tail lights:  nothing but mopane trees and blackness.  I had to wipe my own tears.  I might be leaving, but this place would always be a part of me, my heart permanently stained in its African dust.