Overwhelmed With ‘All That Architecture’

Overwhelmed With ‘All That Architecture’ 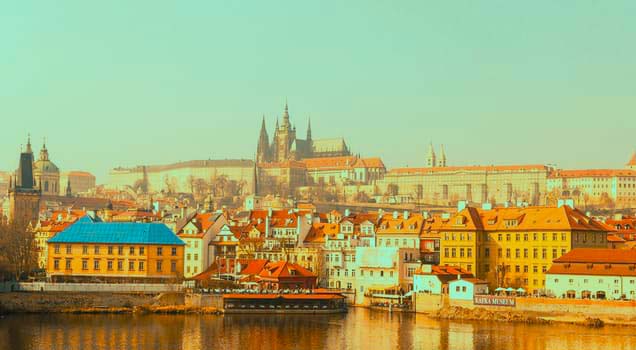 Prague’s beauty is mesmerizing.  I find myself repeating the phrase “this is ridiculous…” every time I turn a corner to see what a new street will display.  The capital city of the Czech Republic, located in Bohemia- or the western side of the country- was spared the major rebuild of typical European capital cities in the 18th and 19th centuries.  She also managed to escape WWII damage for the most part (minus a bomb dropped from a mistaken US pilot who thought Prague was Dresden; it’s where the famous ‘Dancing House’ now stands, built in the 90’s).  The result is a spellbinding display of architecture.

If you want to travel back in time, Prague’s Gothic, Renaissance, Baroque and Neoclassicism architecture (to name a few) date back to the 9th Century with Saint George Basilica in the Prague Castle. The city is known as “golden”, “city of a hundred spires”, “the crown of the world”, and “a stone dream”.

One of the most famous landmarks in Prague is the gothic Charles Bridge, which dates back to 1357 and is the 3rd bridge in its place (you can tell it opens slightly to the left when you pass under the entrance archway).  It replaced the Judith Bridge, which was destroyed by a flood -they happen all the time here- in 1342).  The baroque statues, placed on the bridge in 1678 were displayed to show worldly grace and influence.  The current statues are actually replicas of the originals (which were replaced in 1965 and tucked away in the National Gallery)… but they certainly look like originals.

What’s frustrating about all of this is, like anything, the more you learn, the more you realize how little you actually know.  This post is more for my personal learning than anything else.  Below I try to break down the characteristics of each of Prague’s architecture styles (minus Art Nouveau).  Feel free to scrutinize only the pictures if the descriptions get too abstruse for you.

Gothic Architecture: 12-16th Centuries:  evolved from Romanesque architecture (semi-circle arches) and was succeeded by Renaissance architecture.  Think imposing gargoyles and heavy, grey stone.  Think Notre Dame in Paris, the most famous of the Gothic cathedrals of the middle ages.

Examples are seen in many cathedrals, churches…

An emphasis on symmetry, proportion, and geometry, it replicated the many remaining Roman styles.  Orderly arrangements of columns, pilasters (‘for show’ columns slightly raised from a wall), semicircular arches, hemispherical domes, niches and aedicules (small shrines we see placed on the side a building, for example, holding small altars or statues), replaced medieval buildings.

Grandeur in sculpture, painting, architecture, literature, dance, theater, music.  Encouraged by the Catholic Church after the Protestant Reformation to mainly:

Baroque palaces are built around an entrance of courts, grand staircases, and lavish reception rooms.  The word comes from Portuguese “barroco” or “imperfect pearl”, though the term can simply mean elaborate.

Rococo/Roccoco/Late Baroque: 18th Century: (This one is my favorite, though you see much more baroque here) a response to rules and symmetry of Baroque, Rococo is more whimsy and asymmetrical, has curves, the glitz of gold… think half shells, curved plants.  Often referred to as the French Style, and not adapted in places like Britain (until it became popular in furniture), it has been argued as the essence of beauty for its curves, versus the straight lines and strict circles of classicism and renaissance.  Some, like Voltaire, criticized it as a ‘ridiculous jumble of shells, dragons, reeds, palm-trees and plants’, referring to interior decorating.  The Germans began referring to it as ‘pigtail and periwig’.  (Which is fun to say.)  By 1785, French style turned more towards serious artists, however, it did stay popular in Italy until the second phase of neoclassicism when “Empire style” arrived with Napoleon and brought facade tops to the buildings.

Classicism/Neo-Classicism: 18-21st Centuries: and we’re back to straight lines and symmetry… in fact, it smells a lot like Renaissance.  Empire Style, a lot of columns, and a throwback to Greek and Roman architecture.  Think US Federal buildings, i.e. the Capitol Building, includes fun and fancy interiors leaning towards baroque.

It’s easy to walk by a building, think how pretty it is and continue along your way.  I wanted to understand my landscape, to feel more of a connection to it, to actually appreciate it enough this time to do some research.  Like pointing out a Tesla on your walk to the subway, or nodding to a Weimaraner as your mutt lifts his leg, it’s a sense of accomplishment to simply put a name to something impressive in your surroundings.  Prague has just been helpful in reminding me to answer the question: wait- what is all that architecture?