Life in the Arctic

Adrenaline floods your body as you throw back the blankets of animal furs and climb into the cold air.  It’s 3am.  The sounds of drumbeats and men yelling ‘it’s time to hunt!’ seem to be coming from all angles.  You and your brothers, your Yupik tribe of family and friends, carry a canoe-like vessel (an Umiak) with a seal intestine sail down to the Arctic shore, one of many boats pushing into the 32-degree water.

Now out in the choppy sea, you spot a whale rise above the water in between ice patches.  It’s a bowhead whale.  It submerges, then appears again, and again.  This reemergence is a sign, you believe, that the whale is giving himself to you and your people.  The dangerous part is getting close and staying afloat.  It would be effortless for the whale to swipe its tail and capsize every boat on the water.  With each man quietly paddling closer, the sail providing additional power, the boats approach.

He is struck with a floating hook to mark him if he submerges, eventually harpooned, and pulled back to shore by the lead boat.  The people of the village appear on the snow-filled shoreline, notified by the ringing of the church bell, and over multiple days there are celebration performances and offerings of thanks for the whale’s sacrifice.  The skinning and storing of the meat, oil, and blubber is done methodically, and every part of the whale is shared with the whole community.

This is the Arctic and the Anchorage Museum has brought it to life for me.  Entire villages depend on every person for group survival.  Winters are dark and long (temperatures can go below -50F in February), the summers short and bright.  But there is something special and necessary about every season, even here.

As I made my way around the Anchorage Museum in both the Smithsonian Arctic Center and the temporary exhibit called ‘Unsettled’ (modern native art from the Greater West: the last lands thought to be settled by humans from Australia to South America, the Western US, and Alaska), I was blown away by the modernity and beauty of the museum, the large space, and the quality of each piece.  In the Arctic Center, I was totally immersed in the different tribes and how they live in Alaska.  In ‘Unsettled’, the artists tie indigenous traditions with the indifference of modern culture and it gives off an unstable, unresolved omen. 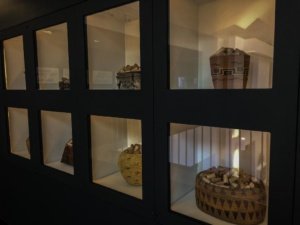 My eyes brimmed with tears as I read about tribal lifestyles trying to adapt to modern life, as shown in the Northern Narratives Gallery.  Suicide rates and alcoholism wreak havoc with indigenous people in the north (as it does with native people elsewhere).  Television, video games, and computers create a sedentary lifestyle and threaten the importance of tradition.  Though things are continually changing to improve their environment, there has clearly been a loss of identity and purpose.

It was in the Smithsonian Arctic Studies, though, that I watched beautiful interviews from native groups all around Alaska.  Laws have been reestablished to allow original customs to resume.  For one, aboriginal subsistence whaling was passed in 1986 to allow communities to continue a culture that is not based on profit, but on human survival.  In areas like Point Hope, Alaska, where a gallon of milk is $12 and 2 pounds of hamburger $23, whaling and hunting caribou provide the dense protein needed to get through the winter.  The videos I watched in the exhibit explain how important it is to pass along this heritage to the next generation.  Their language, subsistence hunting, and group bonding are crucial for keeping their people and history alive. 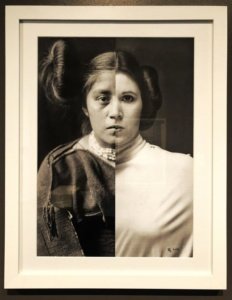 One of my favorite pieces is the feature photograph of the ‘Unsettled’ exhibit: a digital black and white combining 2 photos: one of a Pueblo Indian girl from the Rio Grande Region (taken in 1906), and the other of Princess Leia from the 1977 film Star Wars.  The two halves of each woman’s face are put together, and though the women are worlds-apart, their squash blossom side bun hairstyles and clothing look oddly similar.

In a book I’ve been reading called ‘Georgia: An Arctic Diary’, a 50-year-old woman moves from the US to an Inuit village well above mainland Canada in the Northwestern Passages.  The cultural differences between her and her new neighbors are fascinating.  The locals can’t understand why a woman like herself would choose to be single, and in the very least, why she won’t adopt a child in her ‘old age’.  Another surprise is why she won’t take their husbands or boyfriends from time to time.  Sex is, after all, little more than an indoor sport, and friendship means sharing activity partners.

But what I’ve really gleaned from learning about those who choose to live in perhaps the harshest environment on earth, is their love and happiness for life.  The native groups that are truly in touch with their history and culture celebrate every season, they celebrate living, and they celebrate each other.  Where our society may be lacking in community bonds and participation, we could all take a lesson or two from the masters up north.

Photos below taken at The Anchorage Museum: