“If I have ever seen magic, it has been in Africa.”- John Hemingway 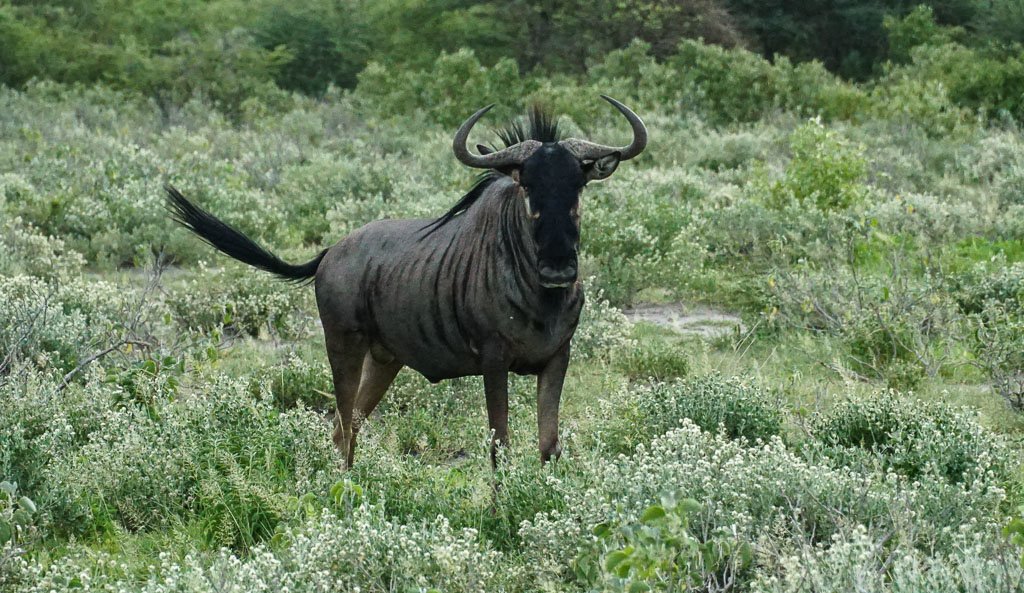 A Wildebeest in Onguma

The Start of a Roadtrip

Our 8-day journey through the NW quadrant of Namibia started in Windhoek.  My friend, John, flew 15 hours from Hong Kong and I took an unmarked taxi 4 hours from Swakopmund to get there.  On my journey, I rode in a Honda with 7 black Namibian men, all of us staring stone faced down a one-lane desert highway with Bryan Adams’ 1991 hit (Everything I do) I Do it For You on repeat.  We stopped at every small town’s gas station along the way (it can be 50-150 miles in between towns out here) to pick up additional customers and squeeze them in as well.  My friend’s journey was a little more predictable with business class seats and full-service airport lounges- he actually arrived on time.  I, on the other hand, was almost 2 hours late.

Nonetheless, we picked up our four-wheel drive truck, the back filled with camping equipment and a pop-up tent on the roof, and headed north towards Etosha National Park to see some African animals in the wild.

About half way to the eastern gate of Etosha, we stopped at CCF- the globally renown Cheetah Conservation Fund– just as it was getting dark.

CCF is 45km outside of Otjiwarongo (about 3 1/2 hours north of Windhoek) and has been around since 1990, thanks to founder Dr. Laurie Marker.  Oddly, I have neighbors back in Colorado who met at CCF and worked for Dr. Marker some 20 years ago.  Other neighbors of my parents in Florida had also visited the headquarters and connected me via email with Dr. Marker…  and still another friend (my best friend from college) met Dr. Marker on Capital Hill in Washington, D.C. during one of the cheetah fundraising campaigns.  It wasn’t just a stop along the way, it was a destination.  And seeing cheetahs up close while they sprinted down fields on the first morning of our journey was pretty incredible. 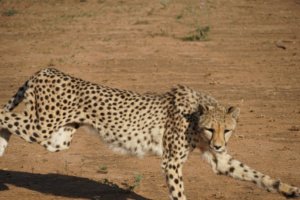 A cheetah mid-sprint at CCF

The cheetah is the fastest land mammal on earth, gaining speeds of up to 70mph.  They’re built for speed, having a smaller head for aerodynamics, a long-legged body, hard foot pads, and a larger lung and heart for absorbing more oxygen.  Their lifespan in the wild is only 12 years since their survival depends on top performance, but in captivity, it’s closer to 17.

They mainly go after small ground animals and birds, but farmers see them as a threat to their livestock and often shoot without asking questions.  CCF has created education programs for farmers, providing them with onsite-trained Anatolian Shepherds to protect their livestock, and have actually made major progress with farmers saving, not killing, the cheetahs that occupy their lands. 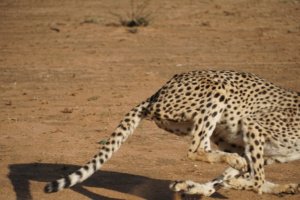 A cheetah mid-sprint at CCF

Cheetah numbers had gone from over 100,000 in Africa to somewhere closer to 2,700 today.  CCF does seem to have made tremendous strides, however, leveling off declining numbers.

Etosha is Namibia’s gem.  It’s the size of New Hampshire with a dry lakebed the size of Singapore in the middle.  It’s fenced in with a high wildlife fence (common out here) to help dissuade poachers, and obviously to keep the animals from migrating away.  But the park is a big enough area that the animals can still migrate 100’s of miles and we could actually drive entire days without seeing so much as a handful of cars.

On our first night, we were staying at Onguma Game Reserve just outside of eastern Etosha.  We arrived by mid-afternoon and were blown away by the high-end quality of the tented camp and wide open main lodge- it was our one luxury stop of the trip (though CCF the night prior wasn’t too shabby, either).  Their property is over 84,000 acres (34,000 hectares) and has a ton of wildlife which they drive you around to see.  Unlike the camps in Etosha, you’re not ‘caged in’ away from the animals. So at night, you have to be walked back to your tent due to the leopards and lions that wander the grounds. 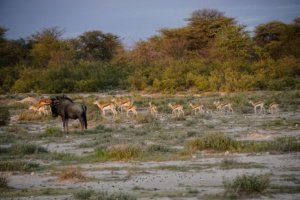 We were there during the summer, also known as the wet season (Dec-March), a time when there are the least amount of tourists due to animals being harder to find.  In the dry season, animals are forced to come to watering holes, conveniently placed in front of safari lodges who have a water supply, and where guests can relax on a lounge chair and watch the parade of animals come right to them.  In the wet season, however, animals typically have more options for acquiring water and are harder to find.  The best time to see animals, any time of the year, though, is early in the morning (starting at 5:30 or 6:30am) and late in the evening (either for sunset or after sunset with a guide and high-powered flashlight… we did both during our stay).  Midday, most animals (other than the antelope) are hiding away out of the heat.

We spotted giraffe, wildebeest, zebras, warthogs, all kinds of antelope including springbok, impala, dika dika (the smallest antelope about the size of a small dog) and red hartebeest.  Our first morning in Etosha, we spotted a pride of lions heading to a water spot and a herd of elephant.  The bull was in musth and actually charged us twice when we stopped to watch him take a mud bath.  I thought the guide pushed the envelope on that one and could have retreated sooner, but it was luckily a common mock charge- a warning.  Flamingos, secretary birds, guinea fowl, and all kinds of colorful winged friends also graced our trip.  It was nothing short of incredible.