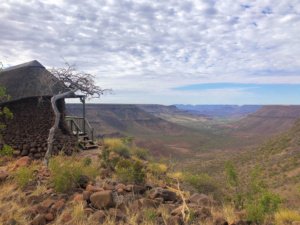 A 2-person chalet at Grootberg Lodge.

Balanced on the edge of the Etendeka Plateau, the Grootberg Lodge in Damaraland, Namibia may have the most dramatic view of any lodge in the country.  Overlooking an immense canyon 2,400 feet below that stretches as far as the eye can see, it’s only reachable from a steep single-track 4WD driveway with a sheer cliff to one side.  The 16-chalet lodge (made out of natural elements like the area’s iron-laced volcanic rocks) blends in with an isolated landscape.

This was the 5th day of our Namibian road trip and earlier in the morning, we had made our way through Western Etosha, passing maybe 2 cars in 5 hours, but seeing hundreds of wildlife, including an especially active waterhole with a herd of giraffe, before reaching the southwestern gate and exiting the park.

Etosha was supposed to be the highlight of our 8-day tour.  We waved goodbye, handkerchiefs blowing in the wind, rolled onto a welcomed tarred road, and re-entered civilization.

Except civilization would be too strong of a word.  Aside from the macadam of the 2-lane highway, there was nothing but brush and a dotting of huts every 15 miles or so until we reached a small town called Kamanjab (pronounced Kamanyab) where we filled up with gas- our last opportunity for the next 2 days.  It seemed as though everyone in town found out we had arrived and all tried their best to sell us something. 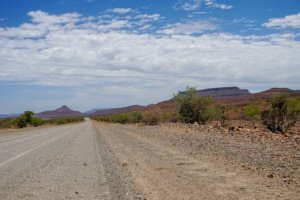 Even as we exited town, we were waved down by a man in a yellow reflector vest who stumbled over to the car and peered in with bloodshot eyes.  (One last-ditch effort to get money out of us, I thought.)  He wanted to get paid for giving advice on how to navigate an upcoming river.  Maybe he’d been drunk since the flood of 2011, the last time a lot of these dry riverbeds had water in them.  “No, I’m sorry… we’re fine.  But thank you.”  As he stepped away from the car (the last form of life we’d see for a couple hours), we headed off down the bumpy dirt road towards Damaraland, seeing nothing but bone-dry river beds the whole way.

2 hours later, gripping the wheel in low 4WD, we drove up over a ridge and along a flat-topped mountain, the road ending at a tiny parking lot on the edge of a cliff.

This incredible landscape before us was formed 132million years ago when South America was still attached to Southern Africa.  The earth’s crust broke open to release molten lava that covered the land in 2km of lava, followed by a splitting of the continents. Identical grapefruit-sized rocks and flat-topped mountains can be found in the Paraná Province in Brazil, an area which once shared the same lava field as here. 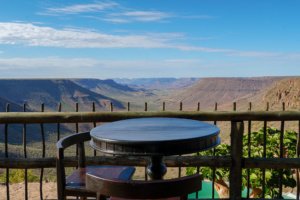 As soon as we entered Grootberg Lodge, we were stunned.  The view, the cool breeze flowing over the plateau, the lodge’s beautiful interior (a thatched roof, white mud walls, dark-colored wood) and the welcoming staff was a gift after a long, bumpy journey through a hot desert.  It wasn’t long before I was swimming in the infinity pool while watching the birds fly back and forth along the cliffs.  And shortly thereafter, we booked a rhino tracking tour for the next morning and extended our impromptu stay to 2 nights.  I knew right away this was going to be a hard place to leave.

In our bungalow, the pleasant breeze from the canyon curled up over the plateau and made the see-through white curtains blow into the room.  The mosquito nets delicately hung from the ceiling, waving back and forth.  It felt like we were the only ones here, perched on a solitary cliff overlooking the abyss.  And aside from a few other guests, we actually were; the closest humans to the lodge were some farmers who lived in mud huts about 30km away.

John and I were just friends (and were both pretty happy about that after testing each other’s patience on our get-to-know you tour), but this would have been the ideal romantic destination.  I was reminded of Aben Humeya, a restaurant I dined in 2 years before in Granada, Spain that overlooked the Alhambra; it was rated one of the top 10 most romantic restaurants in the world by Zagats and I was the only patron in the entire place, curled up next to my table’s heater on a chilly night.  Sometimes you just have to enjoy these things without a romantic partner.

The night before our arrival, a pride of lions had been spotted prowling the grounds at night, so evening nature walks were cancelled on the plateau and the staff escorted all guests back to their rooms after dinner.

At 5am the following morning in the pitch black, I made my way up the stone walkway to the main lodge- on alert for a potential lion encounter, but giddy for our rhino trek.  I gulped down coffee and a full breakfast while John got 15 extra minutes of sleep, and we were soon bumping down the mountain with our guide at the wheel and two trackers chatting away quietly in the beautiful click language of the Damara people. 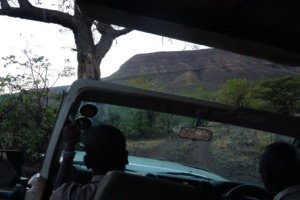 The air was cooler the further we descended into the canyon, the road consistently bumpy.  I couldn’t imagine the guide going any faster; it was like a ride at the fair grounds- bouncing out of my seat, dust flying all around us.  I wanted to laugh out loud, but we were all trying to be quiet despite the engine noise and squeak of the seat springs.

Along the way, we came across 3 spotted hyenas (one missing an ear) who ran across the path and trotted up the hill, peering down at us from behind bushes.  Their hind quarters are shorter than their front legs, creating a sloped back, and their faces are dog-like but still somewhat surreal.  I was awe-struck, and even a little teary, ecstatic we were looking at these elusive creatures in the early morning hours.

By mid-morning, we reached the waterhole and the trackers headed off after 2-day-old tracks while we ascended a nearby hill, getting the lay of the land from our guide.  The landscape was so different from Etosha:  red rocks, rolling hills, distant cliffs, colorful birds and barely-alive trees.  I couldn’t stop taking photos- it was beautiful and actually reminded me a lot of the western United States. 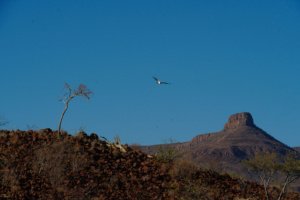 On the rhino track tour.

Within an hour, we were radioed from the now familiar click language: they had spotted a rhino.  We quickly moved to a nearby hill and pulled out our binoculars and cameras.

Her name was Mathilda and she was moving at a steady clip, down ridge lines and up over others.  She was the perfect camouflage for this region, having rolled around in the dust to prevent parasites and sunburn, she slipped in and out of sight easily.

Apparently she had caught wind of the trackers.  We were told she wouldn’t stop running until well out of sight- she was the most spooked of the few remaining white rhinos in this area (10 had been killed by poachers in 2016-2017, which launched a police protection force and rhino conservancy tracking team who now camp inconspicuously in the Grootberg Conservancy and help keep tabs on the animals every few days).  We followed her for about 45 minutes until she was out of sight, careful to keep our distance and hoping to remain down-wind.

This quick-moving pregnant female was 8 months into a 16-month gestation period.  The excitement of finding a rhino in the wild, in addition to her being halfway through a pregnancy, was more than we could have hoped for. 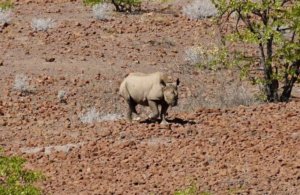 We had a tablecloth lunch from a fold-out table in our truck that included a spread of fried chicken, green salad (not easy to come by out in the desert), sandwiches made from homemade bread, pasta salad, and a coveted square of chocolate for desert (kept in our little cool box) before heading back on the 2 1/2 hour journey to the lodge.

Bouncing our way back, we spotted a pride of lions with 3 cubs (most likely the same group that was patrolling the lodge at night), a small herd of springbok, mountain zebra, and many birds with bright flashy colors.  It was surprising to see so many animals in what looked to be an unforgiving landscape- a recurring theme here in Namibia.  (Unfortunately, we learned that many animals have died during the current 8-year drought, as would many more, if the climate didn’t provide some relief).

As we ascended the mountain and came up over the plateau, I was smiling ear to ear despite my new sunburn.  Turns out, Etosha has some rival locations here in Namibia.