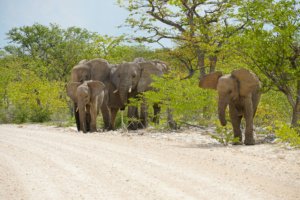 By the 3rd morning, we woke in the dark and climbed out of our tent to catch a 5:30am game drive being offered at Halali, our 3rd stop of the trip.

We got to this camp the previous night, after a 92km ride took us close to 5 hours with the number of animal sightings we had.  One of our best experiences was a herd of elephants coming through the bushes, ears flapping in warning: babies, mothers, aunties, and the bull, all heading our way as I threw the truck in reverse.  The guide book says to keep between 50-250 meters distance from elephants depending on their volatility (not easily determined in a split second) and we were probably 50 meters at the start.  They came at us for about 400 meters before turning into the bushes on the other side of the road.  Watching this parade of elephants, towering above our truck, though, was breathtaking.  This was why we were here. 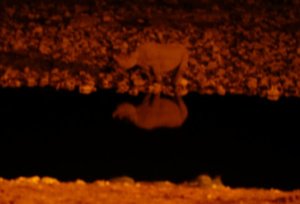 We had been on another game drive shortly after our arrival to Halali, from 7-10:30pm- my first night safari drive other than one I did in Tasmania with my friend Michael, the boyfriend of a woman named Janeatte I stayed with down there.  In Tasmania, I could actually see the animals with our giant spotlight: wombats, wallabies, and even a tasmanian devil with its crooked tail shooting by.  On this one, we saw 5 black rhinos (the most endangered of the 2 types of rhino) at a watering hole, some springbok, jackals, a hyena, and an African wild cat.  Unfortunately, with my depleting eyesight, it was nearly impossible to see anything but the rhinos, which were thankfully in our headlights. 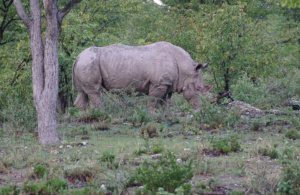 This morning’s guided drive still had us leaving in the dark, but within an hour, the sun and animals were up.  Our one hope was to see a leopard- the most difficult animal to spot, being nocturnal and typically hidden in trees.  No luck.  We did see a white rhino, though, walking through the brush fairly close.  We also spotted lots of springbok playfully jumping, giraffes, blue wildebeest, plenty of birds with exotic names, and many, many zebra.

Rules of the Road

Everything is wide open in Etosha.  The only fences are around the perimeter of the park and the actual campsites and lodges, so you’re literally caged in from the wildlife.  (This sounds strange, but it’s comforting knowing you can get up out of your tent at night without being attacked by a leopard.)  When driving about, one hard and fast rule is to ‘Stay in your car’.  In fact, you’re not even allowed to open your door unless in a designated area.  Wildlife danger is a real fear and none of the locals want a bad ending for a visitor.

My friend John had gone on a walking safari in Zimbabwe where the guide carried a gun.  (No one carries guns in Etosha that I could see.)  They saw 3 lions fighting over a territory from a close distance.  6 weeks later, a guide from the same company was killed by one of those lions.  You just never know- these are wild animals, it’s always good to remind yourself, and totally unpredictable.  Staying in a car or truck is usually your best bet. 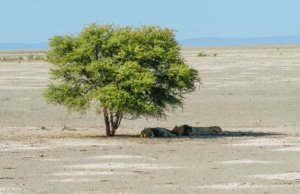 A log spotting that turned out to be lions.

At times, you can look out onto the plains and see a dark looming figure that appears to be moving.  You think it must be an elephant…  But on closer inspection, there’s actually no movement… and now the shape has changed completely.  In the end, you realize it’s a bush.

Finding wildlife out on these yellowish plains was a lot harder than I expected.  The animals seem to blend right into the scenery. 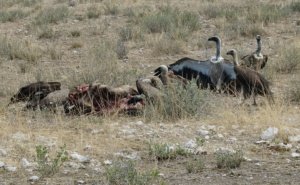 Lunchtime for Vultures in Etosha

One easy animal to spot, though, was the vulture.  Circling the sky, they can be seen from a distance and will almost always mark a kill.  We finally came upon a group of 20 or so (two different types of vultures), fighting over a large herbivore down for the count.

The key to any safari is finding the animals.  In a zoo or small enclosed game reserve, you’re pretty much guaranteed to see the caged animal.  But in an area like Etosha, close to the size of New Hampshire, there are no guarantees.

Winter is the dry season (June-Sept), and it’s also known as the high season.  Being summer in the northern hemisphere helps, but it’s also an easier time to spot animals at watering holes.  Every lodge has one and all others are marked with signs.  Some people merely camp out at a watering hole with their camera, waiting all day and night as the animals stream in.

But this was summer and the wet season (Dec-March), otherwise known as low season.  You may get lucky and spot animals at watering holes, but they’re most likely drinking from the abundant puddles that are (on the average year) generously distributed.

It had been a dry summer so far, in some areas tragically so.  In any event, we didn’t have any trouble finding animals both in the field and at watering holes.  The best part was that there were almost no crowds (our campsites were nearly empty and our game drives were private tours), which apparently is not the case in winter’s dry season.  Tourists (mainly from Germany) descend.  When we spotted the large vulture eating-frenzy, about 4 other cars pulled up after us.  We had gotten so used to being out on the roads alone that it was annoying to have others swoop in to watch our show.  But apparently this is what the high season would be like.  On the plus side, I guess, instead of squinting my eyes to see amorphous shapes in the distance, I could just look for the stopped tourists…