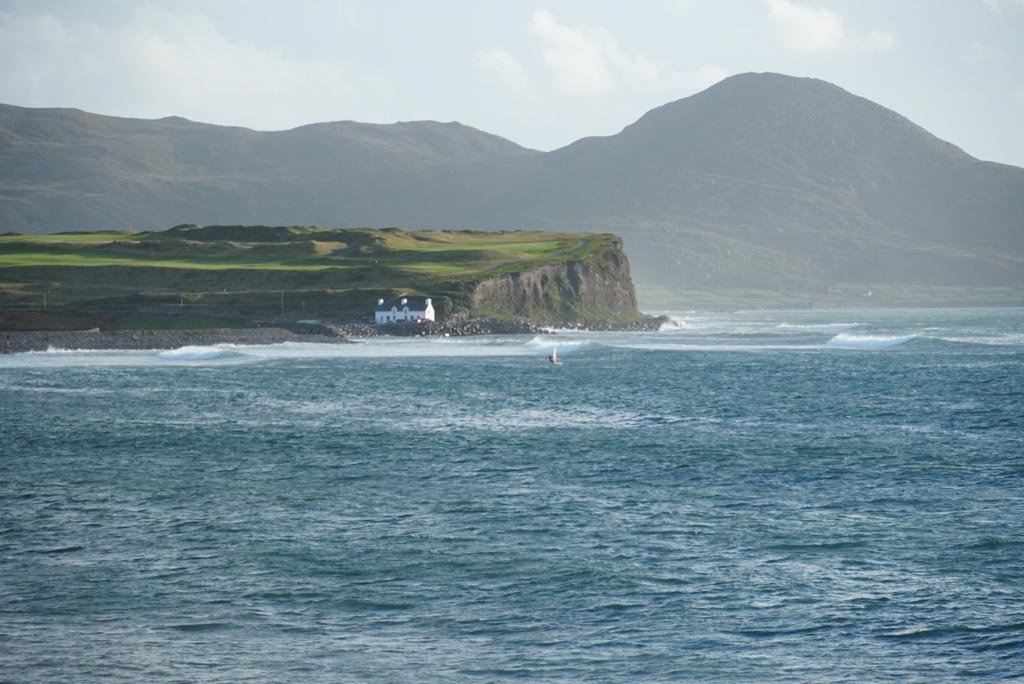 I stepped off the plane on a sunny afternoon to descend a flight of stairs onto the tarmac.  Looking up, I took in the enchanting Emerald Isle, otherwise known as Ireland… a place I had only read about in stories, seen in movies, and heard described in songs.

A friend from my finance days in New York visits Ireland once a year and it just so happened our trips to the British Isles would overlap.  ‘I’ll be in Scotland right next door… of course I’ll come over!’ was my answer once I found out he’d be in the neighborhood.  The ‘hop’ over the Irish Sea wasn’t as easy as I had hoped, but after 8 hours of planes and trains, my trip to the land of the leprechaun had begun. 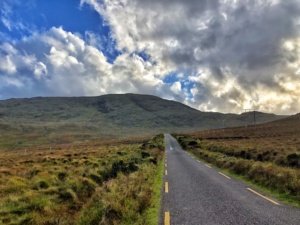 Driving past a rugged landscape of green tufted grass turning brown for winter, we drove from Kerry Airport to Waterville, a coastal town in County Kerry, Ireland.  Sheep with horns circling their ears resembling mountain goats criss-crossed the 1-lane highway before they wandered up and over rocky ridge lines.  Rolling hills with dry stone walls filled the car window.  When we finally reached the coast and descended out of the hills, you could see the white capped sea defining a rocky shoreline.  A lone kite surfer launched off waves in front of a perfect little white house on the edge of a peninsula.  It truly was a postcard.

The sun was out and strong, but, as to be expected, not for long.  A major storm was arriving the following morning:  this would be the first piece of land for it to pummel after 4,000 miles of Atlantic ocean.  In more ways than one, this land on the continent’s edge really does take a beating.

Despite the initial intense storm and on-again/off-again rain, over 3 1/2 days, Jim took me to all the nearby villages and coastal viewpoints.  We held onto the railing outside Valentia Island’s Lighthouse as wind blew rain sideways, drove (in the rain) up to an artist retreat formed from 1800’s thatched stone buildings in the hills, walked in the mud through an ancient monastery and cemetery, and toured Portmagee during a torrential downpour- streets flooding while colorful buildings peeked out from under dense fog. 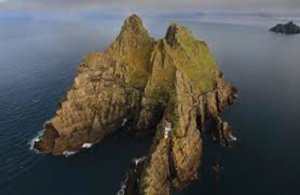 This part of Ireland is famous for Skellig Michael, a rock island with 2 cliff points that reach 714ft in height 7.2mi off the coast.  A Gaelic monastery was built on this inhospitable (and nearly inaccessible) spot in the 6th century.  Stairs were carved out of sheer rock and beehive-like shelters were formed with stacked stones.  We can only assume their meditation was enhanced from the frenzied cacophony of gannets, seals, razorbills, puffins, wind, and crashing waves.  And if this description doesn’t conjure otherworldly images, in 2014, Star Wars (Episode VII “The Force Awakens”) filmed its final scene’s discovery of Luke Skywalker here atop the 600+ steps carved into the cliff face. 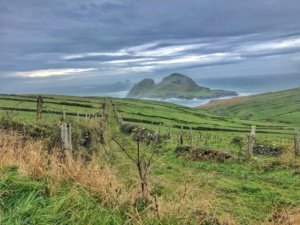 The island of Skellig Michael, Ireland in the distance

Unfortunately, due to its inaccessibility, tours to climb the 600 steps and take in the monk beehive cells are only offered in the summer.  In other months, if seas are calm (they weren’t in my case), you can take a boat out to view the island from a distance.  But we did get as close as we could on land to the island of Little Skellig Michael:  an island even less hospitable than where the monks lived, this one is home to one of the largest gannet colonies on the planet.  To get there, we took an unmarked farm road to its end, surrounded by sheep and dry stone walls dividing the land all the way down to the frothing sea below.

I’ve spent much more time in Scotland than in Ireland, but I will say that the driving in Ireland won the white-knuckle contest.  There’s no other way to say it, these roads are narrow.  My friend Jim regularly commented, ‘yes, you often have to change your underpants…’ as locals catapulted by on windy single-track roads, millimeters from our side mirror.

Speed demons aside, the friendliness of Ireland is unavoidable.  Anyone who’s visited will immediately tell you how incredibly nice everyone is.  Being with Jim exponentially elevated that experience.  As someone who doesn’t forget a name or detail and knows everyone, Jim introduced me to most of the town.  Everywhere we went, people would cross the street or stop their cars to say hi.  By the end of my 4 days, Waterville felt more like extended family than anything else. 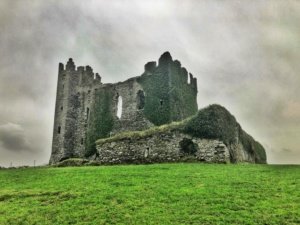 One of my favorite stops, aside from eating in a church-turned-pizza-restaurant and wandering around a beautiful little gift shop called Skellig Gift Store, was a visit with a single woman in her 80’s named Bride whose only means of transport is her 1965 tractor, which she drives to town when the tide is low.  She lives in a tiny home with a single bed in the kitchen/living room.  I chatted with her (sitting on that raised daybed) about her daily life on the farm while the wood burning stove emanated a steady heat.  I had no doubt that this home was literally made out of mud and stones from the field out back.  Her family owned the nearby castle called Ballycarbery (you could throw a stone- there were plenty around- and hit it from her driveway).  Although the castle was in ruins, there was something graceful about the moss and vines growing up to the second and third floors, the eroded walls exposing entire sides, the cracks and arched windows still visibly defined. 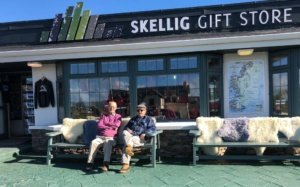 I bought a pair of lamb’s wool slippers at Skellig Gift Store and wandered around the owner’s ‘Waterville Heritage Trail’, a DIY free walking tour that took the owner, Alfred, years to create.  It’s made up of 120 panels along a path and has everything from the origin of the Gaelic language and history of Kerry to the local sea life and background on Irish Wolfhounds.

Even if I had had a terrible time, I would be going back for The Oratory Pizza and Wine Bar in Cahersiveen.  Stained glass medieval windows were highlighted with blue and pink lights, pop and rock music played on the speakers, and hundreds of year old beams created chic rafters… not to mention, the thin crust pizza couldn’t have been more tasty or eclectic.  Have you ever had a pizza with blue cheese, caramelized onions and grilled peaches?  I didn’t think so.  Stop by when you’re in the area.

On my final morning with light just a small speck on the horizon, I ran along the famous Waterville Golf Links path with a wave to Kevin (a new friend of mine), the grounds keeper.  The landscape was unpredictable and bumpy, with huge bunkers for sand traps (apparently mimicking holes sheep dig themselves to get out of the wind).  I looked around at the crisp but dry surroundings; the Smugglers Inn– Jim’s regular haunt and where we dined on delicious salmon our first night- glowed white atop the cliff.  The rain had stopped and there was peace, the beauty was now almost epic.  As the morning light began to emerge (it looked like a Polaroid photograph developing in front of me), it was clear that this was a different place in the sunshine.

Driving back to the airport, we took a shorter, ‘less scenic’ route, with fewer sheep and 2 legitimate lanes.  But the less scenic route had me pressed up to the window in amazement.  The sea on the left, the colorful town on the right… in the sunshine, everything sparkled and looked electrified.  As we passed exits for Dingle and drove through an adorable town called Killorglin (with a goat named King Puck as their mascot and an annual festival in his honor), I realized I had to come back- this trip to Ireland had only scratched the surface.