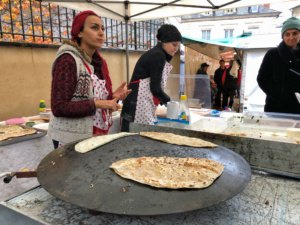 Everything about France: the architecture, the food, the landscape- is perfect.  Everything except the French, that is, a friend in London warned.

Another said, I’m embarrassed to say I’m French.  None of them want to work, yet they’ll hate you if you have any money.

Oh, and I don’t recommend French men, yet another warning I had heard from more than one person, including a French man.

It Was Just a Flight to Paris…

In typical fashion, I was off to France with limited research, just a plane ticket, a train ticket, and an invite to run a farm for 6 days somewhere out in the country. 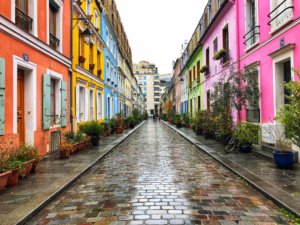 Grey skies and rain followed me from London to Paris as I touched down at Charles de Gaulle Airport on a $60 flight.  After hand signals, blank stares, Google Maps and Google Translate, I made it in time for the 13:57 train out of the city center.  Only it was the wrong train and the wrong station.  Sprinting across a bridge and down a few blocks, 4 minutes before the scheduled departure, I somehow made the correct train before it pulled away from Gare d’Austerlitz and headed for Uzerche in SW France.  Sweaty and out of breath, I hauled my bag onto the luggage rack and fell into a seat as a soaked Paris turned into highways, then fields, then medieval towns straight out of Band of Brothers.

A Farm Down South 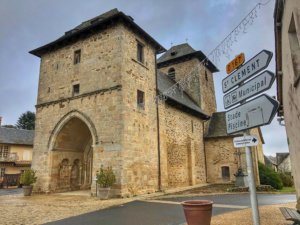 ‘Out in the country’ meant Lagraulière, a small rural town 4 1/2 hours south of Paris known for Limousin cattle, walnut groves, foie gras (developed in this region), and apple orchards.  The farm I was house sitting for, called Jollity Farm, had been dilapidated before English owners took on the project of rehabilitating both the property and the area’s discarded animals.  I was to look after and feed 5 horses (including a black pony), 4 sheep (one of them blind), 4 goats, Gilbert the goose (constantly hissing), 2 ducks, 11 chickens, 3 Vietnamese Potbelly pigs, 5 cats, and 2 dogs.

In between rainstorms, I got used to sliding on my mud boots and heading out with a waterproof jacket and hood, where I sloshed through mud with hay nets slung over my shoulders and 2 border collies in tow.  Electric fences were moved, sheep were brought in from the rain, jealous horses were fed apples and grain, and pigs followed in haste as I led them into a soggy plot every morning.

Frances the neighbor, who owned Limousin, Salir, and Charlet cattle, called me over for espresso at 9 in the morning (by 11, he had moved on to wine).  He couldn’t speak English, and aside from merci, no and oui, I couldn’t speak French.  We spoke in our respective languages using elaborate hand signals and smiles, and (I’d like to think) understood each other.

Before the owner, Linda, left the farm, she introduced me to her ex-pat group of girlfriends over a birthday lunch in the nearby town of Brive-la-Gaillarde, the capital for the Resistance, and the first town to liberate itself from the German occupation.  They were all at various stages of working or retirement, and had moved here for both the relaxed lifestyle and inexpensive property prices (though not the cost of living- that seemed just as high as London). 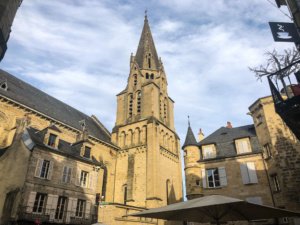 The old town in Brive has pedestrian-only walking streets weaving in and out of golden sandstone buildings.  Boutiques, cafes, and chocolate factories line the walkways, and Christmas decorations bridge gaps between a 12th century church and its Neo-Romanesque bell tower, a 15th century octagonal tower, and pepper pot turrets reminiscent of a fairy tale.

I’m used to spending time alone during house sits, so it was a welcome surprise when one of the women, Lesley, invited me to a foie gras and duck lunch party at her home later in the week.  Another, Yvonne, gave me a tour of her glamping camp site and Irish Cob horses.  And yet another, Kerrie, came over to the farm to cut and color my hair.  I kind of felt like I was part of the posse for that long weekend.

You’re Not From Around Here, Are You? 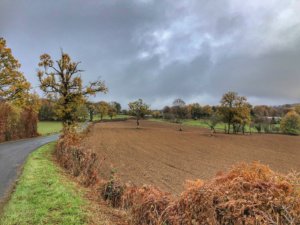 On my walk to the town of Lagraulière

One afternoon, on a 2mi walk back to the farm from Lagraulière, the dogs and I ran into a neighbor coming out of a lone farm house along a dirt road.  He had heard me calling to the dogs and yelled out, ‘Do you teach your dogs English commands?’  This was the first French person (aside from Frances) to acknowledge me in the area.  Everyone else seemed to grimace from behind steering wheels or parted window curtains as I walked past.

Turns out, the friendly neighbor had grown up in Washington DC, has a French mother, and is a Circus acrobat, renting a farmhouse with his tightrope-walker wife.  (Their website here.)  I guess you never know who you’ll meet out in the French countryside… but if they’re overly welcoming, it’s probably safe to say they’re not from there.

The Underside of Paris

On my return to London, I stopped over in Paris for a night during the infamous Yellow Jacket riots.  I fielded worried phone calls from family in the US who were watching mass mayhem on the news from 7,200 miles away.  Part of me was hoping I’d see something, but all I witnessed were calm pedestrians going about their business pushing strollers and buying baguettes.

Though I may have missed out on the above-ground action, I did manage to obtain a ticket to the Catacombs of Paris for the following morning. 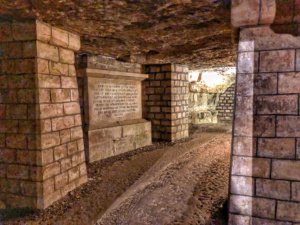 Beautiful reinforcement stonework in the Catacombs of Paris

100’ below the surface, under the city’s water mains and metro lines, lies 200 miles of old caves and 13th century limestone quarries used to build the Notre Dame, the Louvre, and much of the city.  Aside from the deep-seated labyrinth being a venue for raves, cocktail parties, photo shoots, and during the war, bunkers, a portion of it houses an ossuary for over 6 million bodies (a popular way to reduce disease in the city until the 1870’s).  2km of passageways are available to the public through Le Catacombes de Paris, a regulated entry to the underground mausoleum.  Barring this entrance and a few other sanctioned tours, most of the catacombs are illegal to explore, though the majority of ‘cataphiles’ (rogue catacomb explorers) ignore this, dodging police while sliding into manholes, dangling from ropes under sewer grates, and crawling through secret passageways to enter the underground city.  It’s quite a different perspective from the Eiffel Tower.

France hadn’t been on my wish-list of places to visit recently.  I had been to Paris as a kid with my family and to the French Riviera with work 7 years ago, but exploring a country on your own is different- you actually have to think for yourself.  Not to sound ungrateful, but it’s like walking through a forest versus driving through one in a 4×4, windows up and music blasting.  Being alone compels you to notice the nuances, it forces you to interact.  Supporting a local and her eccentric menagerie, getting to know a community of ex-pats, and discovering a different side (the underside) of Paris gave me a taste of something I know I want to return to, hopefully with a little more French under my belt.

Back to the French…

And as for the French, it turns out they’re bogged down in their own existential gloom.  Their suicide rates beat out the other ‘old European’ countries, aside from Finland, and they have a general malaise which trumps far poorer countries.  They’re taught to complain at a young age (undoubtedly heightening depression), despite 35-hour work weeks, free education (including university level), free healthcare, free hospitals, and free museums.  All this angst on top of sky-high expectations (after all, they’re used to the best of everything), and maybe their grumpiness is understandable (just not to most of us wide-eyed country bumpkins crossing the border, swooning over the unreasonable beauty and rich food.)

That said, the trick to getting the French on your good side is to attempt the language- no matter how bad you sound.  I’ve heard, once you get to know them and put your time in, they can be the nicest and most loyal people you’ll ever meet.  (We’ll have to see about that.)