My Arrival in Scotland

My Arrival in Scotland

It was a beautiful fall day in New York when I flew to Edinburgh, Scotland.  I was departing from a military base/commercial airport outside of Newburgh, New York and I had about 5 hours to kill (similar to the length of the flight).  A $189 flight on Norwegian Air was an impressive ticket price to Europe and I was willing to rough it with long layovers and a middle, potentially cardboard, seat.  I spent most of my time walking up and down a limited sidewalk in front of the airport, looking over the electric wires and chain link fence to the tree-covered hills at sunset.  The feel of September was in the air: changing leaves and mowed grass, the sudden need for pullovers, and the sense of football games in the distance.

The flight boarded almost 2 hours early and we took off ahead of schedule.  When we landed in Edinburgh, the tarmac was damp and the grey skies were still drizzling a light rain: we had arrived in Scotland.

I waited at the airport to be picked up for my new adventure: writing as a guest blogger for a holiday accommodation/hobby farm in the Highlands.  The company I’d be working with was revamping their website and wanted to add a blog to attract visitors researching the area.  Similar to a Workaway, I’d work for free in exchange for accommodation and board.  And because they wanted me to get to know the area, they would provide me with a car and encourage me to explore all I wanted: a tourist and journalist’s dream. 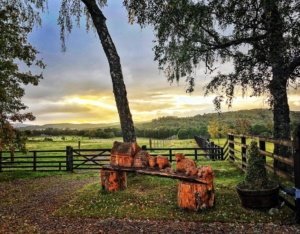 The Farm in Duthil, outside Carrbridge.

My first few days, as they got used to me being around, were spent in limbo: my accommodation wasn’t ready and I was in a temporary living space: a trailer (they called a caravan) with no running water or heat.  The bathroom was outside in the industrial laundry room off the lambing shed across a dirt driveway.  It was about 30-40℉ outside and about 45-50℉ inside.  Coming from nearly 2 months of summertime Florida heat, it was an extreme temperature change, even with long underwear, several layers, a jacket, and a hat.  I would wake up with a cold nose and the sight of my own breath.  But I knew it was temporary and it was hard not to be brimming with excitement over the surroundings. 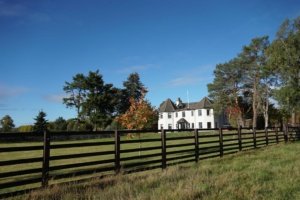 The sun came out my first morning on the farm and I wandered down to the creek at the bottom of the hill, stopping to photograph the black Hebridean lambs and sprawling landscape.  Not long after, the rain drizzled for about 10 minutes, then the clouds were blown away to reveal a spot of blue.  This would be ongoing most days: clouds were like passersby in Grand Central:  some high, some low, some fast, some slow… only temporarily covering up the modest blue sky while she made yet another wardrobe change.  The artful clouds with the rolling hills and hazel fields was calming and magical; but dressing in layers was key.

Over the next few days, I’d get my bearings: small villages with Gaelic names, farms (crofts), lakes (lochs)- all on a circular connection of roadways that make up a region called Strathspey.  We were in the Cairngorms, an old mountain range in the Highlands, one of 3 ranges in the Cairngorm National Park.  Just on the edge of Strathspey was CairnGorm Mountain which held a Ski Area, Funicular, Christmas markets, and hiking trails; then there was the Glenmore Forest Park with a mountaineering center, zip lining options, and plenty of rock climbing, mountain biking, hiking, and water sports on a lake (Loch Morlich).

Aviemore was the largest town in the area with fancy outdoor gear shops, an old steam train, bakeries, gift shops, galleries, a movie theater, a mom-and-pop butcher and large grocery stores.  Most of the other villages, like Carrbridge (where I was living), were made up of a pub, cafes, art shops, and a tiny corner store, just a few miles from the main hub of Aviemore. 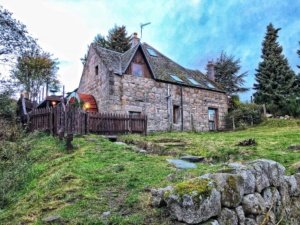 One of Highland Hideout’s beautiful lodges.

The company I’m helping is called Highland Hideouts and they offer 6 different luxury holiday lodges for multi-family outings, all on different properties around Strathspey.  The homes are gorgeous, massive old Scottish country homes remodeled to include bathrooms with every bedroom (a HUGE feat in this area of the world where buildings from the 1700’s often only had 1 bathroom for an entire house), hot tubs and fire pits, large kitchens, flat-screen tv’s in every room, hideaway bunkbeds for children, and multiple fireplaces inside.

Due to a slight change in accommodations, I was rotating between very basic quarters (sleeping on a living room floor) to living in one of the 5 luxury country homes when they were available.  My car would rotate between uHaul-sized vans to small vans to 2-door cars, all stick-shift and well used.  It was exciting going from one extreme to the other with lodging, and it seemed appropriate given the ebb and flow around here- from rugged to ritzy, antiquated to modern.

Aside from getting used to the Scottish Brogue, with Gaelic words dribbled in, there was a miss-match of unit measurements (apparently typical for the UK): Stones- when referencing a person’s weight (14 pounds), Kilograms- when referencing the weight of anything else, Miles- on the road and in automobiles, and meters thrown in for good measure.  Don’t forget left-side driving, left-hand eating, the roll of the r’s, stress the first syllable of each word, the silent t’s, the ‘ch’ in words (pronounced like the composer ‘Bach’), and the funny phrases that I often ask to be repeated… (and repeated)… But all that comes with the territory of trying out a different and exciting culture.

…And this was my introduction to beautiful Scotland.