Mexico City: Soaking in a City Through Exercise

Mexico City: Soaking in a City Through Exercise 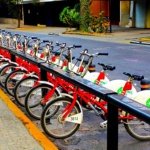 Get out of your comfort zone and take in Mexico City via bike.  Consistent bike lanes may be hard to come by and there’s a good chance you’ll experience potholes and broken macadam, but being able to bike and walk any city is key to staying healthy and happy, and this city is no exception.  Much like similar programs in Europe and the US, ECOBICI is the shared bike program here in Mexico City.  It allows you to borrow a bike 24×7 and return it to rack stations all over the city, so there’s no need for a bike lock.

There’s nothing better than whizzing by traffic in the bike-only lane with wind in your hair while witnessing the local life unfold- especially in a city like Mexico City.  Wealthy neighborhoods and poor neighborhoods border one another; food carts, office buildings, restaurant lean-to’s and the people are what make this city beautiful.  But let’s be honest: traffic can stand still at any time of the day here and you’re better off not being in it.  I rode to dinners and lunches in heels and dresses on these bikes, but I also rode to my gym every morning and explored the city on them, too. 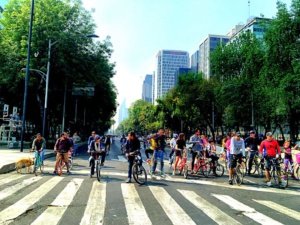 The city encourages its citizens to bike.  One of the ways the city is fighting their pollution problem is to close major streets like Reforma (the major business center avenue) on Sundays to allow non-auto traffic. Check out Sunday walkers, road bike racers, or a guy in an iguana costume on a 2 seater bike weaving in and out of the scramble.  Just seeing people running and biking on a sunny day (on what’s normally a hectic street) is encouragement enough to tap into the exercise movement.

While biking is prevalent, the city has a few great gyms to keep you in shape and help you learn Spanish in its Spanish-only gym classes.  I resisted joining a gym for the first 6 months of Remote Year, but the combination of the city’s pollution infamy, a running injury, and thin ceilings in my new apartment (which I discovered day 1 after a number of burpies had my neighbor pounding on the floor from below), I decided to break my rule.  As soon as I discovered a beautiful gym in my neighborhood with early morning classes that had everything I was looking for, I couldn’t wait to sign up.  Located in the heart of Roma in Mexico City, Qi Wellness is a 5 story gym that has everything from meditation classes, yoga, Cross Fit, Combat, Spin, Pilates, ballet, a rooftop and 3 story climbing wall, to a spa and outside cafe.  The gym is a cement building that is open to a glass wall on one side, with trees and plants cascading its 5 floors.  The rooftop looks out over a street filled with tropical plant life higher than its surrounding buildings.  A wooded running path makes up the median of the road out in front, and includes an obstacle course as an alternative workout. 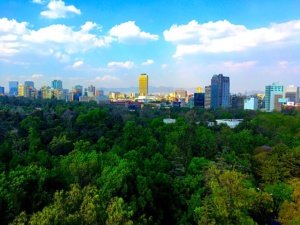 A view from Chapultepec Park

While bikes and beautiful gyms may be found in Roma and its nearby neighborhoods (famous for artists and health conscious citizens), the entire city makes a statement with their abundant parks and art work.  Chapultepec is a massive park, larger than Central Park, with a castle at the top of its main hill and 4 museums to visit inside.  Parque España and Parque México are destinations in Roma, but almost every neighborhood has at least one small park, and many of them include free workout equipment.  Artwork peeks out from every crevice of this city, from architecture and street art, to free standing sculptures and funky storefronts.  Art is this city’s oxygen.

Fall in love with Mexico City like I did.  It’s a place to discover wellbeing, artistic talent, and outdoor life.  And do yourself a favor: see this city unfold via bike.