MEXICO CITY: A Not So Average 48 Hours… where to go, both on and off the beaten path

MEXICO CITY: A Not So Average 48 Hours… where to go, both on and off the beaten path 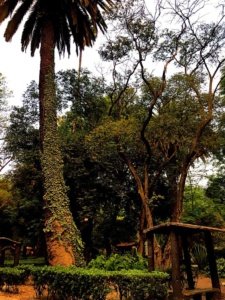 I’ve lived in Mexico City for over 2 weeks now and it’s difficult to pick my top favorite things for a 2-day period, but I’ll give it a shot.  Imagine waking up in La Condesa neighborhood, which looks like an overgrown city built 30-60 years ago.  Sidewalks are broken and uneven; trees, ponds and vines abound.  If you’re not facing a park, you’re looking at an overgrown median between two lanes, with its own walking path.  You run to your gym (Qi Wellness), do a yoga class, and then head home for an apple, avocado toast, poached eggs, tomatoes… and a strong cup of coffee. 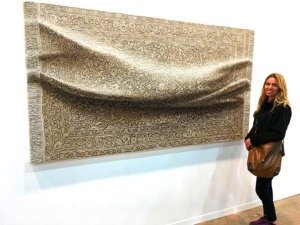 A flat Persian carpet painting at Zono Maco Art Fair, and the author

After attending a community discussion at your co-working space (also in La Condesa) to discuss your next stop: Colombia (wait- didn’t you just arrive in Mexico?) and the upcoming Valentines Day ‘Tinder Ball’, you hop in an Uber with your roommate Janet and visit a college friend’s parents at the (annual) #1 Modern Art Festival in all of Latin America: Zono Maco Contemporary Art Fair (Feb 8-12).  They own 21C Museum Hotels in the States and are there to buy art, which in itself is a life-changing experience.  You get to schmooze with the big time art dealers, artists, and buyers.  You see amazing art, from funky to creepy, from complex to simple. In one instance, 4 of you (including Janet and your friend’s parents) are crowded around a 1970’s TV watching (primarily clothed) 70’s porn in which the characters go from playing Adam and Eve in the Garden of Eden to futuristic humans wearing silver track suits in apartment buildings.  It’s bizarre, but it’s regarded as much as art as the treadmill with a tumbleweed rolling along it’s rubber surface. 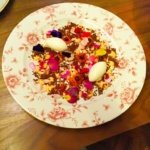 That evening, you’re invited to join a dinner at Quintonil, which some say is one of the top 50 restaurants in the world, specifically #12 by The Worlds 50 Best List.  Cactus Sorbet, Squash and cheese whipped cream… it’s an experience you won’t easily forget.  While you may have ridden to the restaurant on an ECOBICI bike, you’re sent home in a chauffeured private car.  You get into bed that night and wonder if the following day can get any better.

Day 2:  It’s time for you to hit the markets.  Now that you’ve spent your first day riding high with celebrity art dealers and eating in Michelin-starred restaurants, it’s time to get real.  Mexico City is a city of Markets, and while it may not all be pretty to our sterilized eye, it’s certainly thought provoking and jaw-dropping.  Visit 4 special markets via the Metro in an afternoon:  1. Mercado Jamaica:  famous for its 24-hour flower market, restaurant counters, and colorful fruits.  Farmers come from up to 16 hours away to sell their flowers and produce, and will stay until everything has been sold- often resulting in them sleeping in their trucks parked next to their stands.  2. La Merced:  the biggest market in the city, 7 blocks by 7 blocks.  It first began operation in pre-Hispanic times and was the original hangout spot and place to find your mate.  Women would let their hair down (usually braided and pulled up), and paint their lips and teeth red to show they were available and looking.  Interesting… red teeth were sexy.  3. San Juan:  a market famous for its exotic food products.  It’s located just off of historic downtown, and has anything from grasshoppers, rattle snakes and scorpions, to chicken feet and ostrich eggs.  And finally, 4. Mercado Señora:  famous for its witchery products, herbal medicine, and exotic animals.  Come and get your witch cleansing, I know I did.

When you’ve left the markets and have taken the metro back to Chapultepec metro stop, you can either go to the Anthropology museum in the park, or wander through La Condesa and Roma neighborhoods.  Both are havens for artists, galleries and 5-star mom and pop restaurants.  You’ll stumble upon street performers and musicians, breath in the clean air of the large parks, and explore either on foot or via ECOBICI (the shared bike program) the crooked streets, the art work rising up from every corner, and the blue sky shining overhead.  Welcome to Mexico City.