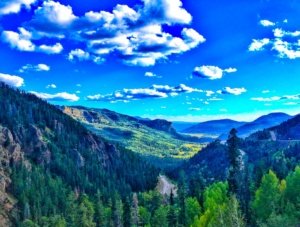 Lush green mountains on the way to Durango

Relief has arrived after 10 years of merciless drought in Southwestern Colorado.  This was visible last week driving through lush hillsides and neon green valleys from central Colorado en route to Durango and Mesa Verde National Park.  Viewing fields of knee-high grass and forests of Douglas-fir standing at staggering heights was hypnotizing.  It’s a scene that would have been common in a more hydrated area of the western US, but seemed an anomaly just outside of the San Luis Valley, home of the Great Sand Dunes and an annual rainfall of 7” per year.

Along US160’s 2-hour drive to Durango, the surrounding areas were filled with acres and acres of pristine ranches, open fields, and dark green national forest.  Just 2 years prior, land near Durango was a tinder box for forest fires.  Cracked soil, in some areas, stretched to the horizon and dust filled the air.  Aside from a spectacle of bare, dead pine trees for 10 miles at the top of Wolf Creek Pass due to [a Douglas-fir disease called] Beetle Kill, and another swath due to a fire (from all the way back in 2003) in Mesa Verde, we rode the green carpeted drive in awe.

After spending an afternoon and evening in Durango, we woke at 6am, hit the free hotel breakfast, and got on the road to arrive at Mesa Verde (just 40 minutes away) by 8am.

Discovered in 1888 by a rancher and his son while looking for cows, Mesa Verde is a Spanish phrase that means ‘Green Table’.  The mesa provided flat agriculture land to tribes for 700 years prior to becoming a home for cliff dwellings.  For around 100 years, 600 cliff dwelling communities existed before a drought forced them to abandon the site around 1300.  The apartment-like communities in the rock cliffs that remain are one of the most preserved archeological sites in North America today.

Out of the 600 dwellings, 5 major Cliff sites can be toured with a guide.  Museums, cafes, restaurants, gift shops, and numerous hiking paths (along with a mesa trail driving loop), can be accessed upon visiting.  Just 21 miles from the highway, it takes anywhere from 35 minutes to an hour to drive through the scenic park and arrive at the cliff dwelling sites.

Climbing along the cliffs via staircases and ladders, peering into the stone structures and circular ground floor kivas that were multi-use rooms for religious purposes and sleeping places with fire pits during the winter, the guides provided enough history to take me back in time to what it must have been like living here 700 years ago.  Most women carried pots of water on top of their heads as they scaled the sides of the cliffs to access their homes.  Rock particles were inevitably chewed and eaten as they pulverized corn, nuts, and other plants, using grinding stones.  You can just imagine how worn down your teeth would become after chewing on rocks for years.  Most people had to deal with a tremendous amount of mouth pain as tooth removal could be life threatening.  In addition to carrying water on their heads, women would carry the community’s urine and feces up to the mesa where it was used to water and fertilize their gardens:  a smell that would keep animals away.  It wasn’t an easy life.

As you tour the museum, you’ll notice reference to the end of the Archaic Period, or the time (8,000 years ago) prior to 1 AD, which brought the reluctant but inevitable change from nomadic life to one of stabilized agriculture.  I love the description of the transition: “The shift to agriculture in the late Archaic has puzzled many archeologists.  It is now known that modern hunters and gatherers tend to work fewer hours per year and are healthier than most agriculturists.  Hunters and gatherers seem to adopt agriculture only when other survival options fail.”

I felt as though that part of the exhibit was speaking directly to me.  Maybe it’s not so strange that I’d rather live a nomadic life at the moment: it’s healthier and, due to less work, less stressful than living a stationary life.  It’s in our blood as human beings to wander, to be hunters and gatherers.  My hunt is for the education of new lands and cultures; my gathering, for experience and knowledge.

Luckily for me, I was able to discover Mesa Verde: a place in my home state.  It’s a reminder that learning about new cultures (like witnessing droughts vanish) sometimes takes stepping into your own backyard.