Living in a Tree: A Weekend in the Amazon

Living in a Tree: A Weekend in the Amazon 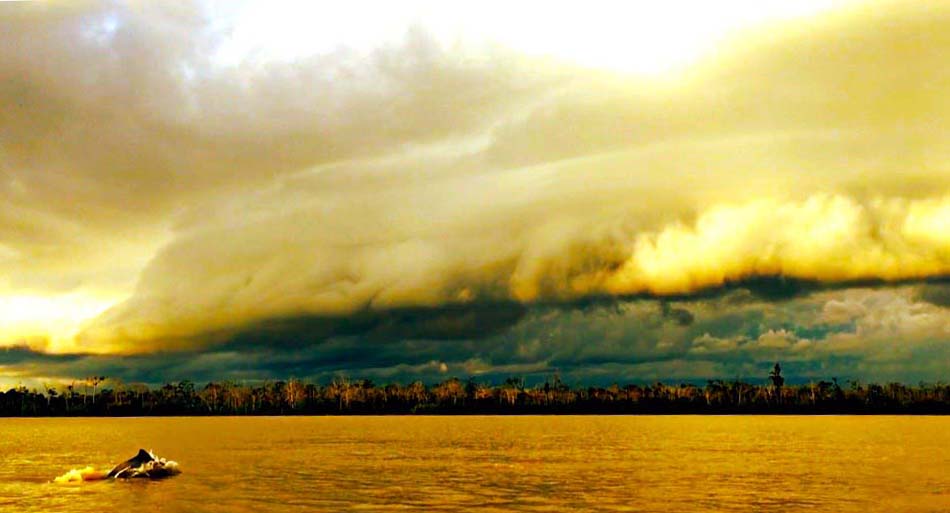 You know those mornings when you wake up, stretch, smile at the sun, breath in the clean air… and then notice a tarantula the size of a dessert dish about 8″ from your face?  This was one of thosemornings.

Events like these are pretty common at Treehouse Lodge, a treehouse resort in the Peruvian Amazon just outside of Iquitos.  When I asked the manager if anyone had ever been injured at the resort, his response was: “Luckily, no.  We’re very diligent with maintenance on the treehouses.”  I wasn’t worried about the treehouses.  They looked more sturdy than anything I had seen on the ground.  How about visitors getting rushed to the hospital from a snake bite or nighttime crocodile pursuit gone wrong?  He laughed.  “Oh, the animals.  That is not a problem.”

Our beautiful treehouse, built in an Oje tree, is 19′ in diameter and 39′ above the flood waters (themselves 30′ deep at their peak).  During the dry season, grass is visible below the treehouses and night walks are possible.  But this time of year, we’re looking down on water.  It’s everywhere.  Our home in the trees had two single beds under mosquito netting, a couch and two chairs, and a bathroom with a cold water shower.  We could see the Yarapa river and another treehouse across a suspension bridge.

Our boat captain was the local ‘ahu’, or chief of the village.  Aside from being decent at acquiring wives (he has 4), he proved to be an excellent piranha fisherman and spot-on navigator through the water-jungle we were living in.  Our guide came from the city of Iquitos and was named Willy.  He caught Caimans with his bare hands, could spot tiny nocturnal monkeys 50′ up, and kept our hooks stocked with chicken guts during piranha excursions.

On our first evening, Willy and Ahu (as we called him) took us out in search of pink dolphins.  What are pink dolphins?  They’re freshwater river dolphins only found in the Amazon.  Pink and large (over 9′ long), they navigate through the flooded, muddy waters backwards, upside down, and sometimes with only one pectoral fin.  They rely solely on sonar and have pinpricks for eyes.  Their dorsal fin is long but not very high, so when they rise to the surface for air, you only see a long body barely breaking the surface.  We crossed from our tributary inlet over the feeder rivers to the Amazon.  Trees with roots still attached floated by, brown water mixed with clear, and it all sped past our boat in sets of whirlpools and rippling currents.  We turned down another tributary and 10 minutes later were spotting grey dolphins during, what appeared to be, their playtime.  Dolphins jumped out of the water all around us.  Every few minutes, a pink dolphin would emerge and take a loud breath, but we were only able to see them slightly rise to the surface; the real show was with their grey counterparts with normal sized dorsal fins.  Before we knew it, the rains came down and a rainbow appeared above the trees as the sun started to set.  Not a bad way to spend the first night.

It was tough to beat night one, but on our second day in the Amazon, we set out after breakfast in search of monkeys.  As we pulled up to a neighboring island, 2 woolly monkeys hopped into our boat looking for fruit.  One was a 3-year-old our guide had named Martina and the other, a 2-year-old who had been raised by people and released back into the wild, named Pepe.  Pepe and Martina ate fruit out of our guide’s hands, ran around the boat and jumped in our laps.  Human-like and naughty, they attacked and played tricks on each other and went for as much fruit as they could get their paws on.

The rest of the day was filled with spotting other animals.  We woke up nocturnal monkeys by bumping our boat into their tree.  They emerged from their home and blinked down at us, thick white eyebrows resting heavy over tired eyes.  Squirrel monkeys were seen jumping across inlets via tree branches.  Blue and gold macaws were found preening their feathers high up in the trees.  And late in the afternoon, we set out to catch piranhas.  As someone who gets bored easily while fishing, in the Amazon, candidates are lined up to nibble your bait as soon as it hits the water.  Turns out, kids often swim right next to piranha fishermen.  “You only have to worry about piranhas if you’re bleeding,” Willy assured us.  And if you unknowingly happen to be bleeding?  “It’s best if you’re not bleeding…”  Was all he would say.

Our final day on the Amazon, we visited Ahu’s village of 300 people, pulling our boat up to the island.  The real draw was getting to hold a pet sloth named Pablito who lived in a thatched roof of one of the homes closest to the water.  The village has a community center, church, and bright blue painted jail where inmates aren’t fed, but showered with red fire ants from passersby while they sit in an open floor room with no roof.  A wooly monkey ate fruit next to a little girl on her porch and other kids ran around us playing with sticks.

On that first morning, I didn’t wake up to a tarantula in my face, but my treehouse roommate, Hilary, did.  When the staff was alerted, our cleaning lady scooped it up with bare hands and carried it outside where it was set free.  Apparently, in the Amazon, it’s not a problem.