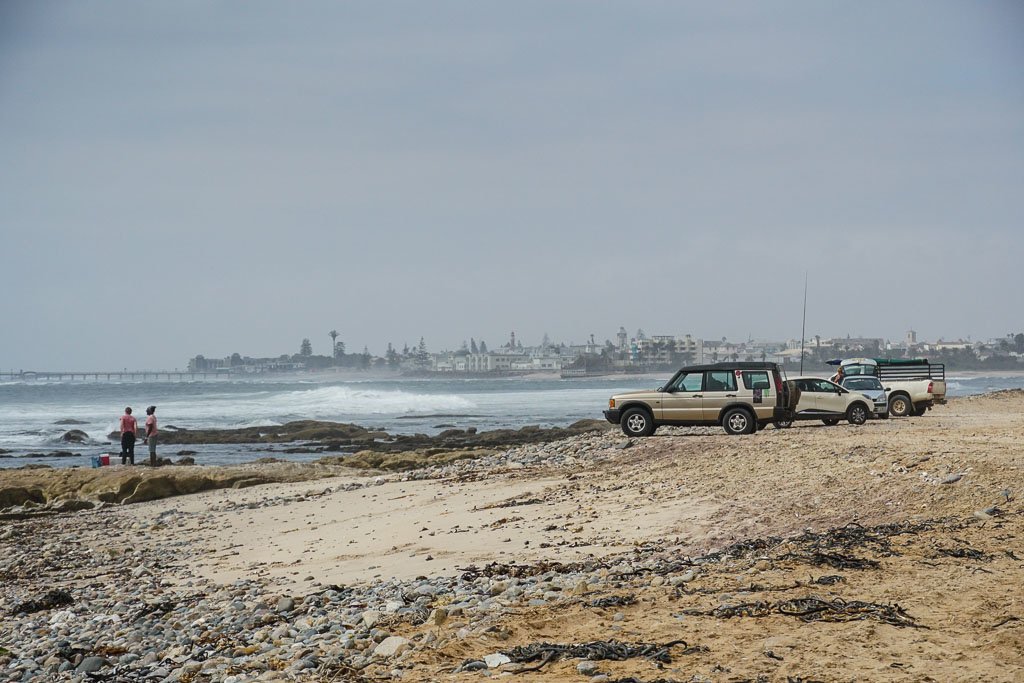 Swakop in the distance

I just got back from an 8-day DIY tour around Namibia with a friend of mine, complete with safaris and rhino tracking, desert exploring, hiking, fishing, and camping out under the stars.  I feel like I’ve been rocked with a travel hangover now that I’m sitting down trying to absorb it all.  We saw so many animals I’ve only dreamed of seeing in the wild, experienced extreme landscape changes, drove over 1500 miles (based on our gas bills), and discovered outposts that look like they belong in Antarctica right here on the Skeleton Coast.

As I sit down to write about our adventures over the past 8 days, my mind can’t help but wander back to the 3 weeks prior which I spent in Swakopmund working at a surfing hostel on the coast.  Over that period of time, Namibia had become my home.  I got to know locals and travelers alike and had a daily routine and job to do.  I started to feel more comfortable with safety, what to look out for and what not to do, and specifically the gems that can be overlooked if one were to rush on by.

As much as I want to jump into the adventures over this past week, I have to touch on my life in Swakop (the local’s name for Swakopmund) and the full Namibian introduction I had. 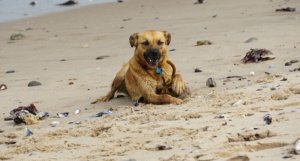 It didn’t take long for me to fall in love with the hostel’s scrappy street dog named Signa (who is the same yellowish color and size of a jackal).  That dog could regularly chew through a dozen cooked chicken bones in a day and hop around like it was no big deal.  We ran the beaches together in the mornings and she’d nervously wade in the water when I went in for a swim, then run around in circles of excitement when I emerged.  We would walk to the grocery store in the afternoons and she’d wait with the security guard at the front while I went shopping.  We even went sandboarding together.  I’m going to miss that little jackal.

In 2017, Oliver turned his grandparents’ holiday home 4 blocks from the beach into a backpackers lodge and campsite now called The Salty Jackal.  The two-story home has room for 14 people inside and 8 people outside; it has a small gym and ping pong table, a slackline for tight-rope walking, a garage filled with surfboards and a corresponding shop to fix them.  Tomato and spinach plants line the property and 2 chickens peck around during the day, laying eggs for the guests.  Any environment depends on the attitudes of the people, which is always subject to change in any accommodation, but this place could stay pretty chill.

Some nights we’d have a Braai at the hostel (an Afrikaans term for bbq) and people would share travel stories and play guitar.  Other nights, we’d cook a feast in the kitchen or make our own dinners and sit around discussing excursions and things for people to do. 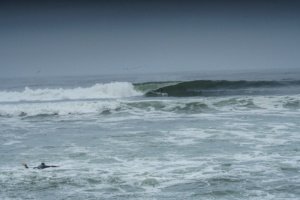 Surfing off the Strand in Swakop

This hostel happens to be the only one of its kind on a coast packed with great surf breaks, including some nice ones right in town.  The most famous wave is an hour south at a place called Skeleton Bay (or its official name, Donkey Bay).  It’s world-renown as the longest left barrel in existence (for now).  Sand has swept out to the break over the years and created a perfect hallowed barrel wave that goes on for about 2km.  One pro surfer caught 8 barrels in one ride (see video here). 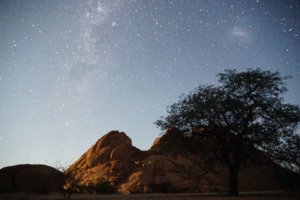 When things were running smoothly, I took the liberty of checking out the area and joining in on activities.  I went surfing, did Acroyoga on the beach with Oliver and his friends (an acrobatics yoga art form that utilizes multiple people for flowing poses), drove a dune buggy in the sand dunes, and hopped in a taxi for a ride down the coast to see flamingos and a salt mine.  I even spent one afternoon in the Mondesa township (accompanied by the hostel’s janitor/maintenance guy named Anton) where I ate street meat, received a lesson in the click language in a kindergarten, ate worms and spinach cooked with sand (seriously), and had a side dish of porridge that could have been used as a frisbee.  I also took a 1/2 day tour with Openspace Tours, owned by a northern Californian named Jay (who’s lived here for 17 years), to one of the largest seal colonies in the world at a place called Cape Cross.  I joined him again to see the ‘Moon Landscape’ and to discover life really can exists in an area that resembles the moon.  I also went on a camping/rock climbing trip to Spitzkoppe, a 150 million year old rock formation that dramatically juts up from a flat landscape in Damaraland, with a few locals who sky dive for a profession.

In the end, there wound up being plenty to do in this sleepy little German beach town with its perfect weather patterns: not too hot, not too cold, and not nearly as windy as its distant neighboring towns.  I was proud to show off my life here at The Salty Jackal Backpackers to my friend at the end of our 8 day journey: it was my first Namibian home.