Is South Africa Safe to Visit?

Is South Africa Safe to Visit?

I’ve always wanted to go to South Africa: it’s a breathtakingly beautiful country with adventurous people and fascinating African wildlife.  In May, I went to Cape Town and drove east to Jeffrey’s Bay.  But it wasn’t without hesitation for my safety. 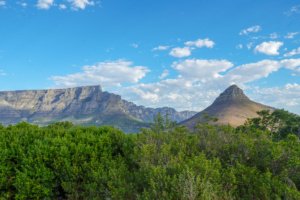 South Africa has earned a reputation for being unsafe.  Time and again, I’ve met South Africans who recite crime statistics and stories of personal attacks.  Friends of mine from Durban left the country in the ’90’s and still shake their heads at its state of affairs.  People have recalled muggings, carjackings, ‘smash and grab’ attacks on vehicles and hold-ups, and the stories seem to get worse the more I hear.

It’s true, there’s a massive discrepancy between the haves and have-nots in South Africa, and robbing is one (unfortunate) way to help distribute wealth.  Crime escalated in April, prior to elections, with xenophobia attacks against immigrants (mainly from other African countries like Malawi, Nigeria, and Zimbabwe), who were blamed for taking jobs from natives.  One man was even burned to death in the street… so it’s understandable to hesitate before booking a trip.

Are These Stories Exaggerated?

I hoped that the stories I was hearing were exaggerations.  While working in lodges within Namibia, I asked everyone who had traveled through South Africa their opinion, expecting different reactions: were these stories real?  Was a person’s life really under constant threat?  And if it was, why were people still living and traveling there?

Following nods of confirmation (i.e. yes, it really is that dangerous), I would get:

“You must go; as a visitor you’ll be fine.  Just avoid Johannesburg, Pretoria, and Durban.”

It turns out that while SA does have a significant crime rate, tourists are the least affected.  The majority of crime happens in poor townships where visitors rarely go.  It is intimidating to see homes with 8′ high walls and electric fence, but statistically, you have a higher chance of being killed as a tourist in Europe or the US due to terrorist attacks.

As one Cape Town tourist said; “Cape Town is safe enough if you take precautions. There are really two cities here, but the crime stats blend them together. The poor communities of the Cape Flats see 95% of the crime while the city centre and suburbs are pretty safe in terms of violent crime.”

And so, with an invitation to stay in Cape Town and get a tour from a local, I booked a series of flights from northern Namibia and headed south. 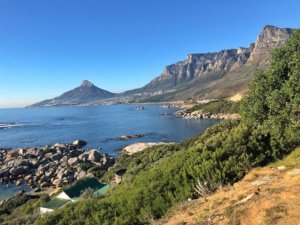 I was dumbstruck by Cape Town’s beauty, even in the dark, and was immediately excited I had come.  This was early May (equivalent to the Northern Hemisphere’s November) and the days were growing shorter.  At 6:30pm as I drove my rental car around winding coastal cliff roads towards Hout Bay after sunset, I could see the outlines of vertical mountains with conical tops, modern homes, and palm trees.  Houses were stacked up and down mountain sides, the winding roads ensuring views in all directions.  I can’t remember what my expectations were, but the reality of Cape Town far exceeded anything I had imagined previously. 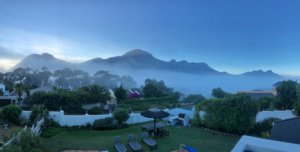 My German friend Andre who had been a guest at We Kebi, and who I was staying with my first few nights, drove me around the edges of the city, downtown to see the tourist attractions, to the northern beaches for the postcard view of Table Mountain (though unfortunately cloud cover impeded the sight), over Chapman’s Peak- a famous road claiming 114 curves above the sea, out to the Cape of Good Hope, to an Ostrich farm, to Boulders Beach to see penguins, and through vineyards on the drive back to Hout Bay.  I couldn’t have had a better tour guide and initiation into the country and I really owe it all to someone who had been a complete stranger just a few months prior.

Later, when I returned to Cape Town after a week of traveling east along the Garden Route solo, I met up with Remote Year friends for dinners and hiked over Table Mountain by myself and into the famous Botanical Gardens.  I noticed I had grown comfortable with Cape Town just as I was leaving.

How to Feel Safe

I don’t claim to be an expert on South African crime, but I do know that I never had an incident during my 2-week visit.  I was hyper vigilant about protecting my belongings and not walking alone at night.  Aside from beggars approaching me who turned out to be harmless, I never felt in danger.

A few rules I abided by were:  don’t walk outside at night, especially when alone; avoid wearing flashy clothing; keep your car doors locked and windows raised (or only slightly open) in the cities; never leave anything visible in the car for someone to grab; hide your cell phone and protect your bag while on the street; don’t go into townships.

In the end, I decided my lodge guests were right: it would have been a shame to miss out on this beautiful country if I had let fear dictate my trip instead of safety.  I had no problem asking people around me (i.e. friends, coffee shop employees, air bnb hosts, and my doorman at one apartment) if certain places were okay to go.  I even asked my Uber driver if hiking Table Mountain at 7am one morning was safe- it was.

Common sense can vary depending on where you go and it takes a little bit of time to get used to different precautions.  Before you know it, though, you will get into the rhythm of the environment and familiarity will slowly diffuse your fear.