I met up with an old college friend this morning on a stopover in San Francisco.  Our rendezvous flew by as we both tried to fill each other in on our lives in a short amount of time.  Back out on the street an hour later, catching my train to the airport, I thought of all the moments from the past 8 months that I wish I could have shared with her, just to hear her laugh.

…Like when I wandered around a corner in New Zealand and looked up to see a man running down the street with an enormous dead boar on his back.  Its arms were around the man’s neck and its head bouncing on his shoulder; no one else was in sight.  It turns out, perfectly normal- boar hunting contests happen all the time and this guy must have been pulling up the rear.

Or when I lived in Anchorage and took care of a neurotic husky/whippet mix who loved bananas, including their peels.  He’d save the peel for last, shake it furiously, then pull it apart with a crazed focus, carefully devouring each fiber string.

Or when I lived with a bleeding-heart vegan couple in Australia who had rescued farm animals that took up every square inch of their 3 acre property (horses, sheep, goats, geese, guinea fowl, chickens and a few very spoiled donkeys).  Even their house was taken over by pets (9 cats, 5 dogs, ducks -yes, 3 indoor ducks- more baby guinea fowl, and a one-eyed magpie named Megs)…

But in our brief catchup, I missed any real details about my life of full-time travel (I spent 3 months here and 2 weeks there, yes, I loved New Zealand… but really, tell me more about YOU).  She filled me in on her job at Google and its politics, her difficult marriage, her 3 kids… we were so different:  She has no free time and I have too much.  She was happy with 2 weeks off the booze because of a stomach virus, and I can’t imagine life not being sober.  We looked at each other as if to say… well, good luck with all that… hugged, and waved goodbye. 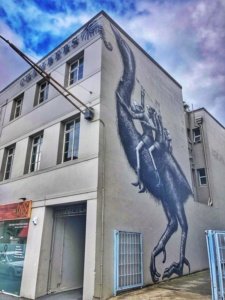 With my mind back on New Zealand, which already seems like decades ago (not 3 months), I remember my 4-day South Island solo drive.  It was a road trip in between house sits, Workaways, and a brief trip back to Australia.  My first stop when I left Christchurch was the Scottish town of Dunedin (the Gaelic name for Edinburgh) where it poured rain and flooded the hillside town so much that I thought my rental car would be taken right off the cliff where it was parked.  Once the rain cleared, I spent an afternoon wandering the college town with a DIY Street Art tour map, learning about each artist with their creativity sprawled 3 stories high.  The 28 different selected pieces were hidden around corners and down alleyways and it turned out to be a fun way to explore the city.  Ending up in the main square, I entered St. Paul’s Cathedral and spotted a painting of a bishop from the 1800’s who was a spitting image of my ex.  Maybe we all have lookalikes from different centuries.

Later, I drove to (what the Guinness Book of World Records claims to be) the steepest residential street in the world on the north side of town, then had a magical sunset drive on a winding single-track road to the Royal Albatross Center on the Otago Peninsula, stopping to photograph fishing towns like Portobello while the sun disappeared behind the hills on the Otago Harbour.  Once I arrived at the Royal Albatross Center, I looked up to see one enormous seagull-lookalike coasting over the center, over the peninsula’s cliffs, and out to sea.  This was the first and only albatross I would see in flight and I had no idea how special it was at the time. 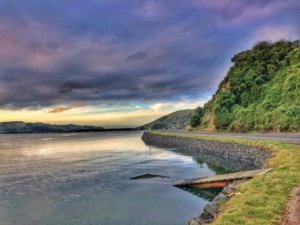 When it got dark, I headed down the rocky hill to the water’s edge with a park guide and other tourists.  We watched as Blue Penguins (the smallest penguins in the world) met-up in groups offshore, then swam to the beach together, resembling an unmanned raft.  Emerging from the water, they waddled pear-shaped bodies over to roost in boxes buried in the hill (thanks to the Albatross Center); their day at sea was done and they were heading home.

Over the next few days, I would stay in farm houses, uninsulated cabins, and air bnbs, renting out rooms as I went.  I’d spend a day on Doubtful Sound, a tourist destination that even the locals say they would go back to again and again.  Somehow I got a sunny day in a typically cloud-covered, water-drenched rainforest.  Mountains rose straight out of the water a thousand feet and sent waterfalls cascading back down, their lush green forests as thick as fur, exposing rock faces sporadically.  Reflections on the Sound were like a mirror, our gentle wake fanning out to disturb the picture. 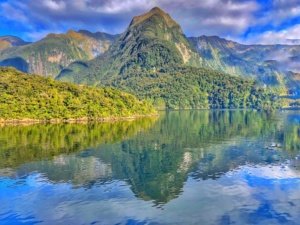 I spent that night in Queenstown, arriving in the dark with no place to stay.  The only availability seemed to be $300+/night rooms until I stumbled across a $41 air bnb ‘private room’ in a house on the lake.  I booked it immediately and drove up the mountain to locate the address.  In the pitch black, I stumbled around to find the front door, knocked, then waited outside the small ski cabin.  The owner came running around the corner (from his other house), glass of wine in hand.  He was an architect, ski bum, and world traveler, and our few minutes of hurried chatter was comforting after spending hours alone behind the wheel.  He turned on the lights and I was shown my room.  A high-tech espresso machine and heated bathroom floor displaced my initial low expectations (being the only bargain price in town and all) and though I slept on a bunkbed, I had a room to myself with a much-appreciated electric heater. 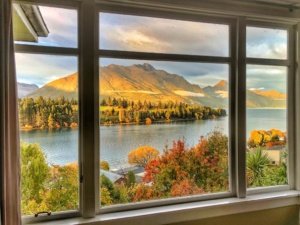 When I woke in the morning, wandering out into the living room towards the bathroom, I stopped dead in my tracks and looked out the picture window across the room.  The sun was just rising, igniting the mountain and fall colors around the lake.  It was a picture I’ll never forget, and it was real.  I ran back to get my camera.

Going from a rainforest in Fjordland to the autumn colors further north was like going from monochromatic to full color.  It was nearly impossible not to pull over every 10 minutes and take photograph after photograph.  If I hadn’t been on a strict time schedule, I’d still be taking pictures there.

The train to the SFO airport pulled to a stop.  I gathered my things and made a quick exit before the doors closed.

There wasn’t a boss I needed to adhere to or children to rush home for, a husband to appease, or work happy hours to attend.  I didn’t even have friends’ birthday parties to RSVP for anymore.  I checked a bag and went through TSA pre-check with my guitar, arriving to my gate in time to board.  As we took off over the colorful San Francisco Salt Ponds and burned-out hills below, the houses laid out in miniature like identical plastic monopoly pieces, I had to think- was there something wrong with me for not wanting all of that below?  Maybe there was, but I was pretty happy to be steering clear of it.  I opened up my book, then thought better of it, and instead drifted off for an enjoyable late morning nap.