Heading Home to the U.S.

Heading Home to the U.S. 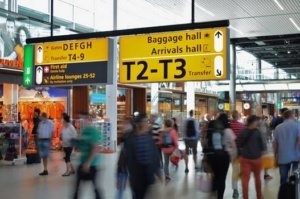 “Are you going to move forward?” I looked up from my phone. My internet was suddenly working at top speed and I was absorbed in reading all the Facebook comments from my latest post about Remote Year ending. “You should really put your bag on the carousel.”

There were 10 people in front of me, all at a standstill, in the security line at the Fort Lauderdale airport. I had just flown in from Lima after being abroad for 13 months and her comments snapped me into reality. I had forgotten about this pushiness. It could have existed in South America, but it may have been lost in translation. “Thanks. I can’t go anywhere right now.”

Everyone said it was going to be a shock coming back to the US, but I wouldn’t say it’s as much a shock as it is a reminder. Remember this? Oh, yes. Everyone’s in a rush and you’re in their way. But I was also now reminded how clean and shiny things are back here.  There was a familiarity and a comfort level that was evident.  And I was looking forward to ordering coffee- just coffee, not espresso- in a large cup.  Most people don’t consume the same amount of coffee we do, and I missed it.

Leaving RY hadn’t really sunk in yet. I spent an extra month in Buenos Aires, making my 12 months with Remote Year 13. I got to know locals as good friends, stopped doing major side trips, and settled into a city for 2 months as a resident, not a visitor. I knew the end was approaching, but I had been numb, just waiting for events to unfold.

I look back on RY and realize I had been in a bubble… which is what I signed up for 16 months ago. I had been terrified to travel alone. There was too much unknown in that. I was a target as a single, white, 5’2″ blonde woman. As I traveled with RY, I eased into travel. I had a safety net, a large group of friends off the bat, and an itinerary that gave me a reason to move to each new city. I may not have connected strongly with everyone in my group, but RY allowed me to slowly break into travel, gain my confidence, awareness, and humility, all in a safe environment.

I always looked at our monthly international city moves as a new adventure.  With 70 people traveling together, the first couple of days in a city were riddled with complaints about who got what type of apartment with which amenities.  I tried not to complain and to work with what I was given.  Sometimes you had heat, sometimes you didn’t.  One month, when I realized I was going to bed wearing my hat and gloves and boiling water to wash my face, I finally buckled and made a complaint (or sent in a support ticket, as we called it).  The landlord was astounded at the conditions I was living in. Both the hot water heater and heating system had broken and it was December in Prague. So maybe I should have complained more, but the variations from month to month made life exciting. Staying in a luxury condo every month would have made me expect that, which would have been too easy. I now had some funny stories to share. I also knew I could handle living in less than perfect conditions.

As I pushed my way through the security line at the airport, I noticed how uptight and nervous everyone was. Maybe I was too relaxed. Had I lost my edge? I had definitely lost my ever-existent anxiety I used to carry around as a New Yorker. I looked on these strangers, my US counterparts. My people. As Bill Murray says in Stripes: “We’re all very different people. We’re not Watusi. We’re not Spartans. We’re Americans…That means that our forefathers were kicked out of every decent country in the world.” And it’s true. We’re a mix from everywhere (and our ancestors were kicked out for demanding more), which I love. Maybe we are full of expectations and demands. This country, like every country I had been to this year, has its own timing and beat.

“I get it, you’re in a rush. So are the rest of us.” I snapped back at the woman, who was now pushing my roller bag for me. And just like that, it was as if I had never left.