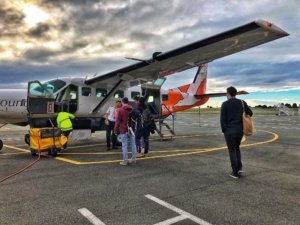 A few weeks ago at the Nelson airport, something strange happened… and by strange, I mean amazing.  When checking in for my flight, I wasn’t asked for a ticket or even a piece of ID.  When boarding, I was offered a seat next to the pilot.  Was I dreaming?  No, I was just flying Sounds Air in New Zealand and it happened to be the experience of a lifetime.

When I arrived at the airport, I was out of breath.  To be fair, I had just driven a tense 2 hours over a highway half destroyed by a cyclone two months prior and the dotted line separating the original 2 (now 1)-lane highway was the jagged edge of a cliff.  I arrived at the airport in plenty of time, but realized the gas tank on my rental car was nearly empty.  A search ensued for a ‘petrol station’, a few wrong turns were made, and here I was breathlessly asking the luggage handler if I was too late to check in my bag.

He looked at me with a smile.  “You must be Lee.”  He clicked a few keys on his computer keypad without looking at my ID and let me know he’d come find me when it was time to board.

Looking behind me, I realized we were in a single room airport.  The check-in counter faced a rental car counter, a coffee shop, and a gate.  I had flown into this airport a week prior, and out of it a month before that, but I hadn’t really given it a good look.  There was no security check anywhere to be seen and the baggage claim was essentially the curb out front.

When it was time to board, the luggage handler (and seemingly only employee of this tiny airline), found me (I suppose there weren’t too many places to look) and 3 others, then walked us through an unmarked door and out onto the tarmac.

“I see it says no mobile phones on the tarmac, but can I take a picture?” I asked, motioning towards the prop plane we were about to board.

“Would you like to sit up front to take pictures during the flight?” he asked.  If he meant sit in the cockpit, then hell yeah.

And that’s how I found myself in the cockpit of a Cessna Caravan CE-208 (typically used for cargo deliveries and sky diving), seated next to a handsome pilot named Tom.

The seatbelt was a racing harness and the pilot’s headset looked like it was from the ’70’s, the ear padding held together with electric tape.  The microphone had to rest against your lips to pick up any sound.  “Just get romantic with it,” Tom offered. 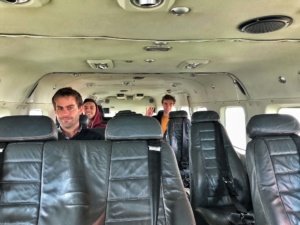 There was no door or separation between us and the rest of the plane, and when the outside doors were closed by the luggage handler, Tom came on the loudspeaker to address the 3 other passengers, turning around to make eye contact.

“Hi, everyone, this is your pilot Tom here.  There are safety instructions on a card in the seat-back in front of you.  So if you’re interested in safety, please read it.  And… thanks for flying Sounds Air.”  He switched off the loud speaker.  “Ready to race Air New Zealand to Wellington?” he asked me.

We had just rolled down one runway and were now rounding the corner to face an entire runway length ahead of us.  Tom applied takeoff power.

“How long you been flying, Tom?” I asked, trying to make myself heard in the microphone.

“Oh, about 2 weeks,” he responded, sliding on his sunglasses.  We were racing at takeoff speed along the tarmac until the plane lifted, airborne.

As we increased elevation over Nelson, he pointed out landmarks: Nelson below us, Boulder Banks and its narrow tail of a beach, the South Island’s highest peak (outside of the Southern Alps), Golden Bay (where I had just spent a week), Picton and Marlborough.

From my 6 flights so far in New Zealand, I’ve determined this country may be the most enjoyable place to travel by air.  If you’re flying domestic, the majority of the airports have no security check.  That’s right:  no security at the airport.  You can walk from the front door directly to your gate… with the person who drove you to the airport, even- a concept I haven’t been familiar with since the ’90s.  Sounds Air seemed to take it a step further, though; they didn’t even have tickets.  It was as close to flying private as you could get.

We broke through the clouds and turned left across Cook Strait.  After about 20 minutes, Wellington appeared ahead and we began our descent from 7,000ft.  The strong winds pushed the nose of the plane hard to the right and we fought the wind at an angle.  “This is normal,” I was assured, the ferocious gusts moving the small plane sideways.  I found out later that Wellington is the windiest city in the world with an average wind speed of 16 mph.

Video clip of the descent…

After landing surprisingly easily, the power was reduced and we coasted along the runway, eventually stopping in front of the airport.  Switches were flipped, buttons pressed, and the engine cut.

I felt a little dizzy from the excitement of flying in the co-pilot seat as I handed my headset back to Tom and unhooked my racing harness.  Is there proper etiquette to asking a pilot out to dinner?  My mind started to flicker forward.

“My boyfriend’s a commercial pilot,” I imagined myself saying to a stranger.  “No, not United.  A smaller airline…”

Was Tom married?  Was Tom even close to my age?  He looked like he was about 10 years younger.  I paused, considering all the variables, then thought better of it.

‘Thanks again!’ I called, easing myself out of the plane and climbing down the step ladder.  A private flight lesson on a commercial plane?  Not something I was expecting when I woke up that morning.  Yet this was just another strange and amazing adventure in beautiful New Zealand, a country that feels like a small town and never seems to disappoint.