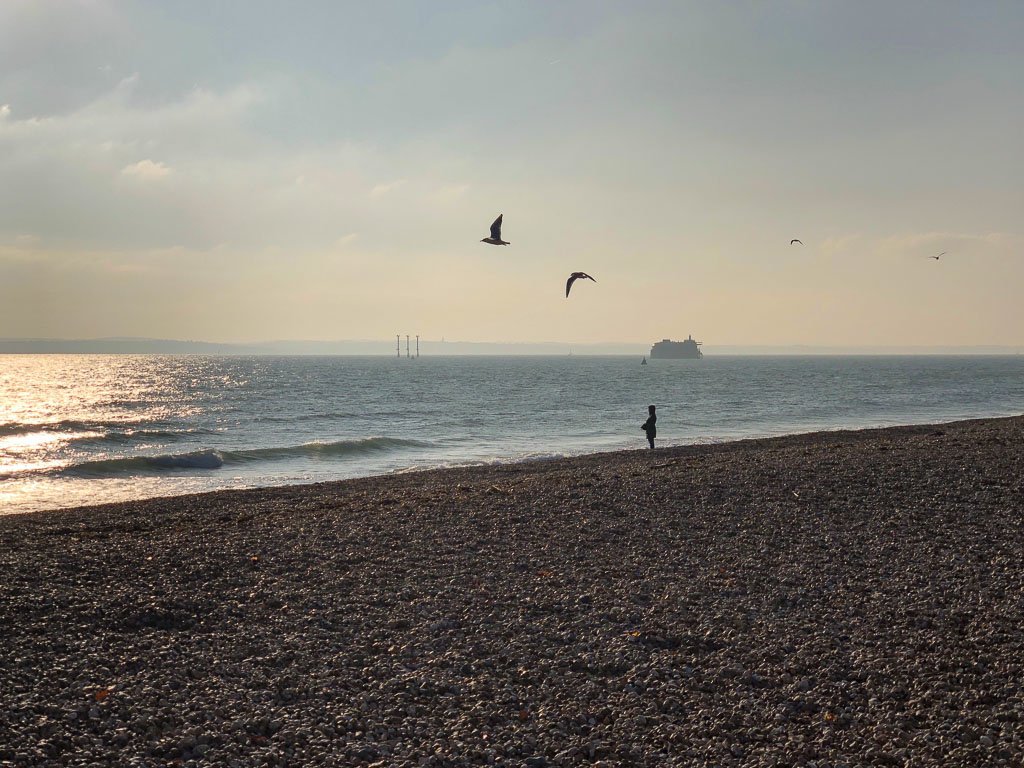 The beach in Southsea, England (an island fortress in the distance).

While trekking around England the past couple of weeks, I’ve stayed in two seaside towns looking after small dogs: a pair of dachshunds (a miniature smooth hair and standard wire hair- as expected, both hilarious and adorable), 2 maltese, and a yorkie terrier.  But my travel around England’s coast involved much more than walking dogs- it was a trip back in time, a journey to ponder human history.

The first location was Southsea, a small town directly south of London by 65 miles.  It’s part of Portsmouth (once Britain’s greatest naval port) and is directly across from the Isle of Wight.  This southern shoreline was the British first line of defense against the French in the 1500’s.  In the early 1800’s, it became the birthplace of the industrial revolution, housing the first mass production line; in the 1900’s, it weathered heavy Nazi bombings.  Every square inch of this area has a page in the history books.

Today, Southsea is a beach resort-turned-neighborhood and university town with the obligatory pier, smoothie shacks, arcade, and ferry terminals for transport (including the world’s only year-round passenger hovercraft) to the Isle of Wight.  But in the winter, the heavy stone and brick buildings from Georgian and Victorian eras make the seaside town look overly dressed for the beach.  And as if stuck in a 500-year-old knight’s tale, the Southsea Castle, fortress walls, and 3 defensive man-made islands, still stare patiently towards the water, lost in a bygone era. 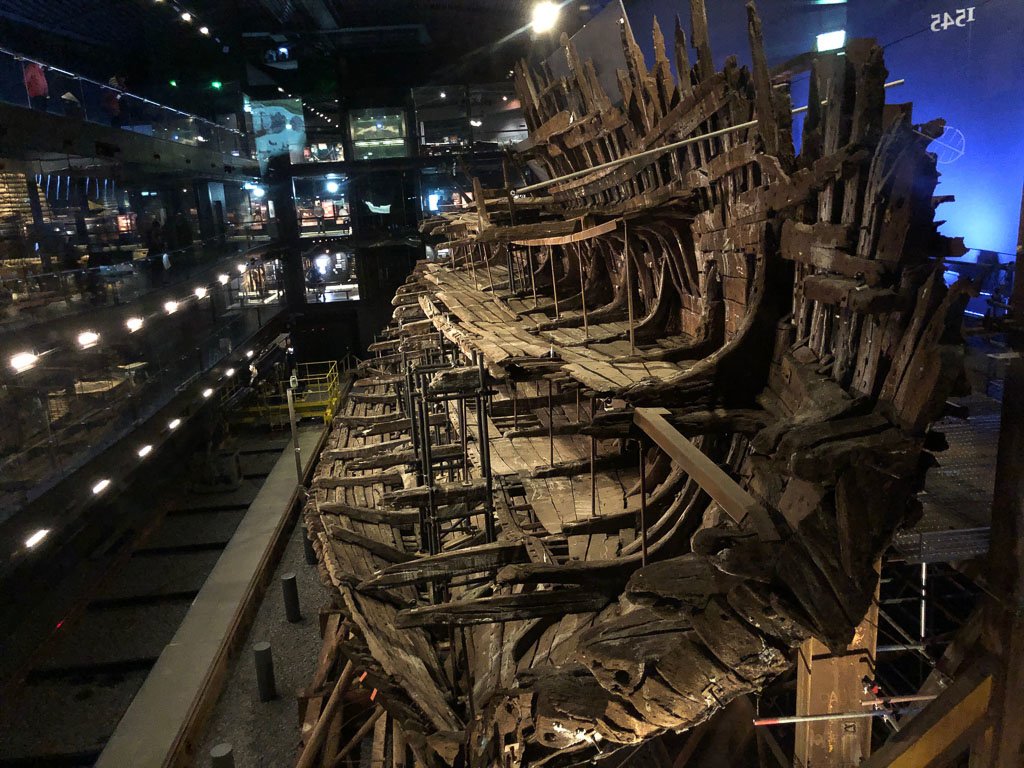 Remains of the Mary Rose

It may not be a surprise then that a ship from the 16th Century was rescued from the water, piece by piece, to be carefully reconstructed in the Portsmouth Historical Dockyard.  This is the Mary Rose, built between 1509 and 1511 for King Henry VIII during the Tudor period.  It had 34 successful years as a war ship before it sank during the French invasion of 1545.  After 437 years, over half the ship had been covered by the silt floor of the Solent (the bay between Portsmouth and the Isle of Wight), while the other half, presumably, was destroyed and swept away.  In 1965, divers discovered part of the port-side frame sticking out of the mud 50ft below the surface.  The real excavation didn’t start, though, until 1982 when they were able to dredge up nearly 3/4 of the boat over a 2 decade period.  After 20 years of using underwater vacuum cleaners to uncover mud, what remains of the boat are showcased alongside an astonishing number of rescued artifacts, including detailed information about the men onboard.  This happens to be the only 16th Century war ship on display in the world.

Evidence of daily provisions for each man were uncovered from the cook’s diary: an estimated 4,000 calories per day were distributed to everyone, including 8 pints of beer, considered more nutritious than water at the time (and even consumed by children and the elderly alike).  Also preserved were the surgeon’s tools, confirming gruesome treatments for injuries sustained onboard.  Skeletons, clothing, entertainment (like backgammon boards), wooden planks for plates, covered beer mugs called tankers, the carpenter’s dog… over 19,000 objects were ‘rescued’ from the site, painting a story of the boat’s last moments before it quickly sank.  It’s a fascinating look into life on a war ship during that era. 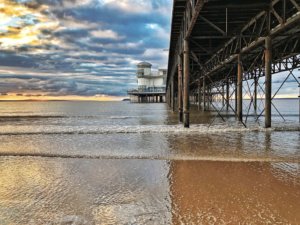 My next house sit was 4 hours up the west coast on the Bristol Channel.  Weston-super-Mare is another beach town with fortified walls along a cliff, a Grand Pier with an arcade and snack bars, and a wide beach which extends as a sand bay out into the channel at low tide.

The town itself is made of stone and concrete, some decadent buildings mixed with plain ones, a standard pedestrian street, and grand fountains.  Locals bundle up and hurry to their jobs in the mornings, the fog and cold trapped by neighboring hills.  Along with the Grand Pier and fountains, it seems everyone is waiting for summer to start. 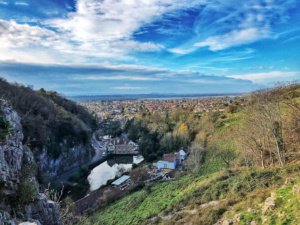 A view of Cheddar from atop the gorge

Towns near Weston are wonderful escapes during winter’s coastal chill.  The town of Cheddar is a small village 13 miles in from the coast, resting at the base of Cheddar Gorge.  The hills that rise up from Somerset county’s farmland are sliced open by the gorge, the tall rock cliffs overlooking the sprawling landscape below.  This is the birthplace of cheddar cheese, and the local cheese shop still ages cheddar in the town’s caves with the original recipe from the 1500’s.  A young man offered me a sample of 100-year-old cave-aged cheese as I entered their flagship store.  You’d think after 100 years, some strong flavors would be evident, but amazingly, it was only lightly sharp and a little smokey- delicious, nonetheless.

But my favorite part of both seaside towns was the discovery of Bath (full name, Bath Spa), an hour from Weston-super-Mare.  In just under 3 hours, I was able to see the inside of the 12th Century Abbey with its remarkable fan vaulted ceiling, walk the River Avon, view the Pulteney Bridge (one of just 4 bridges in the world to have shops on either side), and take a tour of the Roman Baths.  I could have easily stayed for a week.

The entire city of Bath is a designated UNESCO World Heritage Site.  Its architecture is largely Palladian (a Venetian design with the classic Greek/Roman temple look), created from Bath Stone which has a warm honey coloring.  The buildings are kept in pristine shape, generating an old yet new feel, and, though I cringe to say it, remind me of the Venetian and Bellagio in Las Vegas. 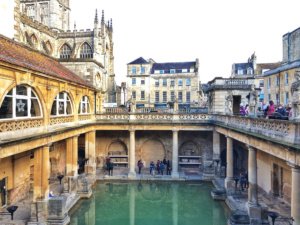 Bath was ‘discovered’ in 860BC when Prince Bladud (son of King Lear) stumbled upon the healing powers of the area’s isolated hot springs.  Having contracted leprosy and been reduced from prince to pig herder, he led his herd through the area.  Soon he noticed his pigs’ rashes diminish after they rolled in the mud; he did the same and cured his leprosy.  Consequently, he became King and turned Bath into a city.  Cut to 800+ years later, the Romans also discovered the healing powers of Bath, immediately built a temple, and turned it into a spa and religious mecca.  A lot of the Roman buildings fell into disrepair at the collapse of the empire around 400AD, but remarkably, the public baths and springs preserved an immense number of artifacts, uncovered in 1880.  Coins and notes on metal (many asking for the revenge of a thief or the return of a girlfriend) were retrieved from the pools.  Because of these mineral springs, Bath has the largest Roman coin collection in the UK.

A Pause to Look Back

Living as a local on England’s coast was fun, though a tad chilly, but touring the 1500’s and a piece of the Roman Empire during my stay was unexpected and eye-opening.  The Romans, much further back in history than the Tudor era (by 1100 years, in fact), were elegant, sanitary, spiritual and surprisingly modern.  The war ships of the 16th Century, in contrast, were rugged, unhygienic and (unsurprisingly) violent, a lot like life on shore.  It’s fascinating to see how human behavior can retreat and spring forward alternatively as time plods ahead.  It makes you wonder what the next 1500 will bring…