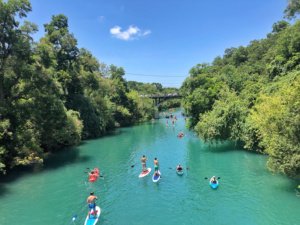 “You should try ‘Goat Yoga’ while you’re here,” a friend suggested.  I was in Austin, Texas for the 4th of July week dog sitting a golden retriever and visiting fellow Remote Year alumni.  It was over 90 degrees in the shade and the river that coiled through the city like a snake was covered in stand up paddle boarders and kayakers trying to get relief from the heat.  Despite the high temps, people were still standing over flames barbecuing- it was Texas, after all.  But it was also Austin- hence goat yoga.

The city of Austin feels 3/4 Californian and 1/4 Texan.  I saw someone walking down the street wearing a cowboy hat, a pearl-snap western shirt and gun holster who passed a techie on his skateboard in Birkenstocks who flaunted a nose ring and tattoos.  It’s where people drive 2-ton trucks even though their heaviest piece of equipment is a laptop.

I love that it’s liberal and artistic in an otherwise conservative state, that it claims more live music than anywhere else in the country.  And yet, despite its beer-swilling tree-hugger edge, its drive and rapid tech growth have people stating the crane (a construction crane, that is) is the new state bird. 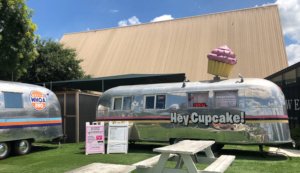 As I rode the local bus from my subdivision in South Austin to downtown, I could see Airstream trailers with sliding windows handing over cold brew coffee and green protein smoothies.  An ice cream shop called ‘Lick Honest Ice Cream’ had offbeat flavors like beet/mint and goat cheese/thyme/honey- all natural and local ingredients, of course.  ‘CoffeeSock’ was another unusual concept selling cotton fabric coffee filters (organic, handmade, and reusable) from an industrial warehouse.  Any one of these places might be looked at as out of place somewhere else, but here, everyone’s in on the joke- the more eccentric the better.  As if to emphasize that point, we coasted by a sign displaying the city’s motto: ‘Keep Austin Weird’. 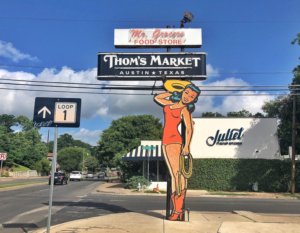 I exited the bus at the Barton Creek stop opposite the Colorado River and the high rises of downtown, then unhooked a shared bike and rode along the painted bike path.  As I glided by, I noticed a staple called Thom’s Market– a market with more gluten free, non-GMO, paleo-conscious, high protein, and sugar free options than I’ve ever seen in one place. Its sign was a twenty-foot-high ’50s pin-up model in cowboy boots out front. 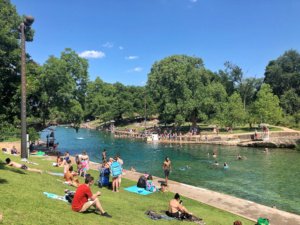 Sunglasses slid down my nose as sweat dripped from my chin.  I found relief under the shade in Zilker Park, and later, from a dip in the pool at Barton Springs (a natural rocky-bottomed pool filled with spring water, river grass, turtles, and a few endangered salamanders), but those seemed to be the only respites from the blazing sun and sweltering heat.

I continued through Zilker Park, along fields with ultimate frisbee games and a bootcamp doing pushups.  I biked over a pedestrian bridge to Lake Austin where I got a cold brew coffee at Mozart’s Coffee Roasters and sat outside where the weather had cooled under a soft silky breeze and cloud cover.  Perched over a marina and facing green hillsides, the cafe’s deck was being serenaded in French by a girl on acoustic guitar. It seemed like the perfect ending to a steamy afternoon.

There’s no coffee deficit in Austin.  In fact, it’d be tough to walk a block without seeing a coffee truck or cafe. 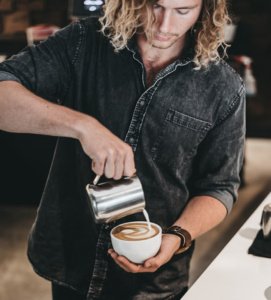 You can spy on caffeinated Tinder dates having intellectual discussions in brightly lit bistros where coffee, tea, and wine is served alongside quinoa bowls and avocado toast.  And yet, in a nod to Texas and the south, these cafes are right next to greasy BBQ joints playing country music to patrons in cowboy boots.

A sweet neighborhood joint called Radio Coffee and Beer was down the street from where I stayed.  It’s a rustic barn of a building with a down-home patio and taco truck in the driveway.  There was a melting pot of millennials on their phones, remote workers on laptops, long-bearded musicians, and post-workout moms pushing strollers in the morning hours.  It was a nice place to type away while while enjoying coffee and a muffin, but at 5pm, the wifi is shut down and they move on to drinking and socializing with live music or trivia. 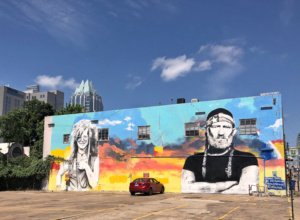 Despite copious amounts of alcohol (for all that live music and over-caffeinated mornings) and guns on the hips of locals, Austin feels summer-camp-safe.  The biggest threats may be the electric scooters being navigated by over-served 20-somethings or party buses that corral people to start drinking at 10am- but even they looked harmless with smiles from ear to ear.

It all brings me back to Goat Yoga and keeping Austin Weird.  Who wouldn’t be inspired to hit a yoga class with goats, work next to a long haired musician in a coffee beer bar, or bike alongside a river teeming with stand up paddle boarders?  They’re all reasons to return to Austin: an ever-changing city keeping itself strange… in a good way.