“Sossusvlei is magnificent.  It’s spectacular, it’s home to the highest, most beautiful dunes in the world.  It is all these things, but really, Sossusvlei is indescribable.  You must see it to believe it.”- Florance Karita, Park Ranger, Sossusvlei

On Top of The World 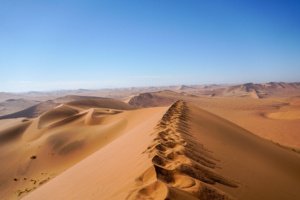 I looked over the edge of Big Daddy and out to the Atlantic coast, some 60km away: nothing but sand dunes.  I was 325m up (1,072ft) on the 2nd highest sand dune in the world, my khaki collared shirt stating ‘We Kebi Safari Lodge’ showing signs of perspiration.

Pablo, our solo guest from Chile and my one detail on this excursion, had long since turned back, disappearing down the steep slope.  But I had to see the view from the top- the ascent had just gotten better and better with every step. 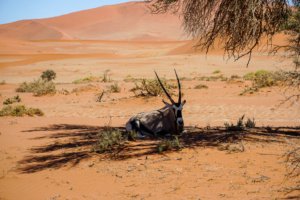 In spite of its difficult name, Sossusvlei (pronounced Soss-oos-flay, meaning dead-end marsh due to the Tsauchab River being cut off by massive sand dunes on its way to the Atlantic Ocean), is one of the most photographed areas on the planet.  It’s also in one of the driest deserts in the world (the Namib), but fog from the ocean blankets the 50,000 square kilometer area, allowing it to discreetly brim with life.  The menagerie includes lizards that swim in the sand (a ‘thermal dance’), dung beetles that tumble down the dunes, sabre-horned gemsbock (or oryx) that trek for days through the desert like camels, albino spiders that tap dance, and the list goes on.  Even the clay pan which the dunes rest upon is a ceiling for even more sand dunes below the surface:  fossilized, and some 20-40million years old.  The more you learn, the more bizarre the place becomes.

Realizing I had taken enough time at the top, I turned to experience the fun part: heading down.   Semi-skipping and running with long strides as red sand flew up around me, the scenery became a blur.  It was 1 stride down for every 10 it took to ascend. 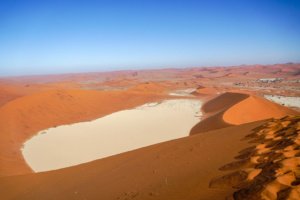 Straight ahead of me was the oval salt pan of Deadvlei sitting at the base of the dunes: a grouping of 900-year old camel-thorn tree remains cemented into the ground by lime, a mineral seeping out of the desert.  The trees had a chance to grow after the area was flooded a century ago, but they eventually died from lack of water and now remain virtually unchanged due to the dry climate.

I met up with Pablo and my co-worker Herman on the hardened white surface of Deadvlei.  We pushed the frozen-in-time trees: no movement.  A model in a red dress with black hair was standing on a tree, the dunes providing a backdrop as the warm breeze blew her scarf in the air.  There was a stillness, a quietness that everyone seemed to respect… it was like we were tiptoeing on Mars.

By 10am, the temperature reached 37C (98.6F) on its way to 40C, the red dunes hazy in the shimmering heat.  The sun was just getting started, but it was time for us to head out.  We packed up the remains of our brunch, set up under one of the few living trees not far from Deadvlei, and headed for the cool air conditioning of the safari van. 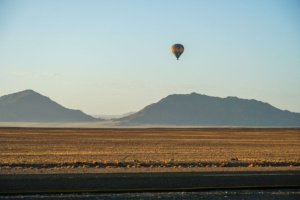 A hot air balloon in Sossusvlei

Southern Namibia is barren and almost void of people, so it was a little surreal to arrive here at 6:30am and see cars lining up at the park gates, people climbing dunes, a hot air balloon and prop plane making their appearance as the sun rose.  Leaving was the same… where did these people come from and where were they going?

As we pulled out of the gate and headed back towards We Kebi Safari Lodge, where we wouldn’t see another car during the hour-long drive, I thought about how this almost felt like a theme park, but there was nothing themed about it; it was natural and real- just a true world wonder.