I finally made it into Angola last week.

It wasn’t the first time I had tried.  Back in March, I was denied at a simple border post near Epupa Falls that had a collapsible desk under a tree, a single officer, and a rowboat.  I didn’t know much about Angola then, only that it was some exotic and lush country to the north which no one really talked about.  I knew there had been a long civil war and fight for independence against the Portuguese, that it was oil and diamond rich, but didn’t know much more than that.  Later, when I researched visas for Americans, it seemed you could obtain one for business, but not for tourism.

But here I was, a couple months later, being promised entry by a friend who ran a fishing lodge just over the border.  According to both the Namibian authorities (at this new border post) and my friend Deon, Americans had been okayed in the last year to enter the country with just a passport (information I couldn’t find online). 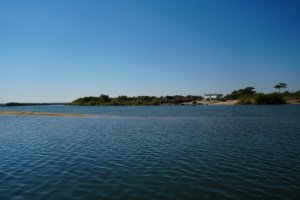 A Namibian border guard handed me a clipboard to scribble my name and passport number, then pointed to a dirt area where I could leave my car.  I grabbed my backpack and headed down a steep path to the glistening Kavango River (which becomes the Okavango Delta in Botswana) and saw a boat waiting to take me to Angola.

Down stream, hippos were cooling themselves under the water’s surface with only their eyes and ears sticking out, bobbing out of the water every once in awhile like inflatable toys.  A 6’ crocodile was sunning itself on the opposite shore.

3 of us (my 2 new friends with the lodge and a boat captain) boarded a little motor boat with our groceries and backpacks and made our way across the Namibian/Angolan natural border.  Not far from the hippos and crocodile was a woman up to her knees in the river, washing her clothing; 3 kids splashed near a sandbar. 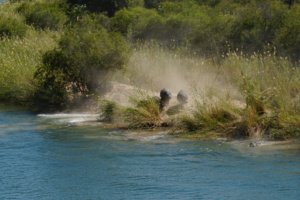 “Is it safe to swim here…?” I asked, nervously looking between the crocodile and hippos, trying to keep my voice down.

The men looked over at me rolling their eyes.  The locals continue to swim, fish and do laundry here, they said, despite one or two being picked off every year.  The deaths never seem to deter them.

So where is Angola and why does it sound familiar?

Angola is just north of Namibia on Africa’s west coast.  Formerly a Portuguese slave trade state and eventual colony, Angola was resource-rich, not just for food, coffee, rubber and ivory, but for diamonds and oil.  But after nearly 500 years of Portuguese rule with forced labor and almost no infrastructure or even one school put in place, the natives had had enough.  Angola won its independence in 1975 after a 14-year Colonial War only to fall into a 27-year Civil War with internal groups fighting for leadership.  The US and South Africa backed one group and Cuba and Russia backed another.  Wildlife was mowed down with machine guns, beautiful jungles burned, families displaced, children turned into soldiers, young girls forced into slavery, and 15 million landmines were scattered.  Over a million people are said to have been killed and 4 million displaced during this quarter-century conflict (significant with a population of just 29 million). 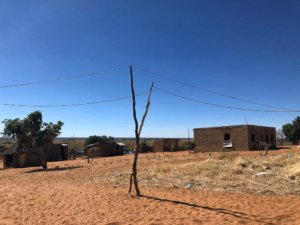 Sadly for the survivors, after the civil war ended in 2002, there is no normal.  Infrastructure barely exists with only dirt roads in place and electric lines raised by simple thin sticks.

I was visiting the SE corner of the country at Dirico and would eventually drive with my friends just a few miles out of town to a tiny fishing camp.  But here in this small town, not only was infrastructure non-existent, but basic supplies and food, too.  For a country that had resources like coffee, bananas and sugar for major export at one time, it now imports 90% of its food and only uses 10% of available farmable land.  The few supplies in the local mini-mart had all been imported from Portugal.

We arrived at the Quito River Lodge, situated on the edge of the snaking Cuito River.  It’s a simple rustic fishing lodge with 6-chalets, unlimited fishing and boat trips, meals included and prepared by the local Angolan staff and the owner, and a beautiful rosewood bar.  A fire pit surrounded by native dugout canoes used for seating is arranged just off the dining area, and in the distance an elevated pool and viewing area overlook the river. 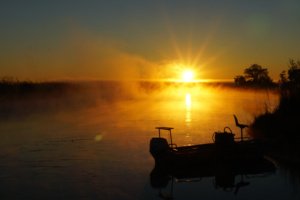 sunrise on the Cuito

We spent sunsets cruising the river while fishing and mornings watching a red fireball lift up out of the fog over the endless grasslands.  We walked along cow paths in the afternoons, picking wild figs and spotting unusual birds, only a group of huts a kilometer away breaking up the wilderness.  There was no internet or cell signal, just nature.  Due to the area’s serenity and successful fishing (they throw all fish back, but are known for catching huge tiger fish and nembwes), most guests immediately book a follow-up trip. 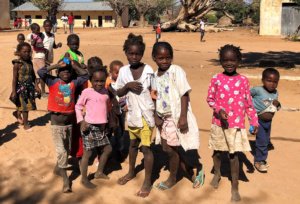 The day I left, we drove to Dirico and my hosts ran into the local mini-mart for supplies.  I sat in the back of the Land Rover, waving to the children just let out of school.  Some were filthy and barefoot, their clothes falling off their waists.  Others were proudly clothed with simple hand-me-downs.  But they were all giggling and happy to see a stranger, perhaps because of my white skin and sunglasses.  They waved when I waved, smiled when I smiled, and repeated my words.  I couldn’t get over how happy they were and how much fun I was having with our limited game.  When we pulled away, I stuck my head out the window, waving goodbye.  They all screamed and ran alongside the car, trying to keep up, throwing their arms in the air as a final farewell. 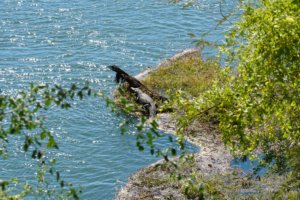 We pulled up to the Kavango River where the little motor boat waited to take me across to Namibia.  More hippos were visible downstream, their heads looking in different directions.  Once across, I could see another group of hippos sunning themselves on the shore, surrounded by tall grass.  Suddenly a loud racket sent all of them bellyflopping in the water.  2 teenage kids and a dog were the culprits, their heads evident through the tall grass, their whoops heard from across the water.  Astonishingly, running at hippos (who kill more people than any other animal in Africa) didn’t seem to be a fear for the locals.  Slowly, everything settled back to normal: a statuesque croc on the shore, 30 hippos floating in the water, and me safely back in Namibia.