Córdoba, Argentina: A Not So Average 48 hours

Córdoba, Argentina: A Not So Average 48 hours 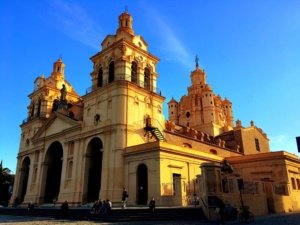 Córdoba, Argentina has a saying, “you can travel all over the world, but when you come home, you’ll realize there is no sky like Córdoba’s.”  This city isn’t on Top 10 Lists and is often mistaken for its namesake in Spain.  Yet one of the great things about Córdoba is just how un-touristy it is.  There are museums and plenty of churches (with 80, its nickname is the city of bells), and even the current Pope Francis did some of his training here.  But since it’s not a tourist destination, it’s not obvious what makes this city unique.  One thing that is obvious, though, is the daily bright blue sky that the locals are so proud of.

Below is a 48 hour schedule of ‘off the beaten path’ excursions you can find here in Córdoba:

11am: As with most cities, my recommendation is to always start with a Free City Walking Tour.  Cordoba’s is hosted by a company called La Docta and meets every day at 11am in the Historic Center for a downtown tour, and 5pm for the Bohemian neighborhood tour of Guemes and Nueva Cordoba.  You’ll learn about the settling of Córdoba and how the city’s founder, Jerónimo Luis de Cabrera, was hanged for changing city locations from Salta (known for its striking natural beauty of red rock cliffs and mountains) to where Córdoba is today.  You’ll visit the Jesuit crypt that was sealed up for hundreds of years and stumbled upon in the last 30 during a subway project later aborted.  You’ll learn of the most recent dictatorship (ending in ’83) that resulted in 30,000 missing people.  You’ll view the thinnest building in South America (literally), at a width of 9’ in the largest part, and as you walk through downtown, you’ll be taken through the history of the Jesuits in Córdoba while reminded that the current pope is an Argentine.

2pm:  Lunch:  Cabezas de Tormenta:  a commune made up of 10 artists in a mansion located in a residential area of Córdoba.  Their vegan chef (and hard metal guitarist) produces excellent seitan, Portobello, and soy burgers, all with vegan mayonnaise and homemade bread.  The meal is finished with traditional mate before you tour the house.  Aside from taking a peek in all main rooms on the first floor and viewing the murals on the walls of the open-air atrium/fountain area, you will watch music videos that have been produced in the house, take an hour-long acting course (which will leave you sweating), and walk through their backyard theater workshop which is set up for the audiences’ heads to raise out of the stage floor during performances.  Imagine: plays take place around the audience as their heads are level with the actor’s shoes!  You’ll finish the tour with a Spanish acoustic serenade.

9pm: Dinner at the finest restaurant in Córdoba: El Papagayo.  Their exceptional tasting menu (modern cuisine with an Argentinian twist) of a 9-course wine pairing goes for $73 and is not to be missed (non-alcohol tasting menu is $43).

7:45am-7pm: Live like a Gaucho (otherwise known as an Argentinian cowboy): This day trip includes horseback riding and an asado (Argentinian BBQ) in the mountains.  At 7:45am, get picked up for a day near the town of Capilla del Monte in the Sierras (a 2 hour ride outside of Córdoba).  You’ll arrive, a horse will be picked out for you and saddled.  These aren’t any old saddles.  They come with about 5 blankets stacked: 2 under the leather saddle and 3 on top.  You float along as your ride carries you over the hills of the Argentinian landscape, which looks surprisingly like the western United States.  You’ll ride for 2-3 hours before stopping at a make-shift asado grill under a lean-to and eat under a tent.  After unlimited grilled meat, grits, the best empanadas you’ll ever taste, and wine (if you’re up for it), followed by mate, you’ll witness a horse getting a mane haircut and shoed in record-flat time.  Afterwards, you’ll ride back along the trail as the sun starts to set. [Rides can be booked through Cesar at GettePasajes.]

9pm: Dinner: Visit a galería in Guemes: Kiui.  Galerías are alleyways between buildings that once belonged to residential housing before this area started to resemble SoHo in New York City.  Once Guemes became gentrified 8 years ago, these alleys were turned into mini galleries, hosting shops, restaurants, bars, ice cream counters and art markets.  Sneaking into an unmarked narrow doorway in Guemes will often lead to a colorful assortment of late night shopping, dining and people-watching under an open sky.

When it’s time to leave Córdoba, you’ll have connected with the locals and been mesmerized by bright sunshine days, interesting history, an art scene, and open land on the outskirts of the city.  You were set on falling in love with Buenos Aires, but you’ve now got a soft-spot for Argentina’s second capital.  It’s time to spread the word.