Breaking the Law: Graffiti in the ‘hood

Breaking the Law: Graffiti in the ‘hood 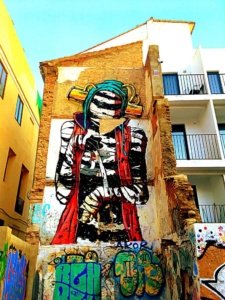 Street Art is very big in Valencia; this is a wall next to my apartment

When you hear the word ‘graffiti’, you may think spray-paint, vandalism and cryptic territorial signatures.  Street Art, though a subcategory of graffiti, instead invokes artistic images in public spaces that spark discussions.

Graffiti itself has a negative connotation, and I’d be the first to agree that the majority of it needs to be removed. Growing up in Philadelphia in the late 70’s and early 80’s, we were hard pressed to find a street without incoherent graffiti vandalism.  And it wasn’t pretty.  My one take-away from book The Tipping Point is how cleaning up graffiti from all subway cars in New York City (before they left their home station) was a key factor in nearly eliminating street crime: i.e. graffiti was bad.

So imagine my surprise when I started to fall in love with Street Art. Typically unsanctioned, non-contracted art, Street Art checks the box of vandalism, but the creators are artists with messages that the public can understand and discuss. It’s a message ‘for the people’ as opposed to fabricated script only understood by a select few.  In addition, it can be charming and an improvement to the neighborhood.

In the last 6 months, I’ve lived in 4 major cities that had graffiti tours (Lisbon, Sofia, Prague and Valencia). Graffiti Tours are led by guides who show the public how to find and understand Street Art by world-famous artists with cult followings.  As Street Art gains popularity with a global culture, not only are tours available, but apps and websites are dedicated to times of day artists will be performing (or creating) their Street Art.  Other apps stay up-to-date with the latest wall art additions, for example WallSpot in Barcelona, Spain. 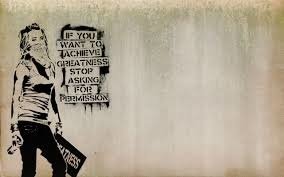 How did Street Art begin?  If you ask most people, they’ll say Banksy was one of the originators of Street Art.  Extremely well-known, though anonymous and unverified, he’s a British artist and film maker from Bristol who helped electrify gorilla art (or art promoting political activism) in the early ’90’s.  After doing some research, I’m proud to see that long before Banksy was being hunted down by cops on the streets of Bristol, deserted neighborhoods in the ’80’s in both New York City and Philadelphia had started the movement to decorate otherwise nondescript walls with murals. SoHo, LES and Chelsea, Williamsburg and DuMBo were some of the first neighborhoods in NYC to start the trend.  By 1984, the Mural Arts Program in Philadelphia sponsored street artists to decorate the city, a movement organized to encourage graffiti artists to make better use of their time; it also helped put Philly on the map as the ‘City of Murals’.

Living in Valencia, Spain for the month of January, I’m in a neighborhood well known for its interesting Street Art.  Spray Paint, Stenciling, Vinyl Photographs and even Cross-Stitch Yarn Bombing are some of the mediums.

As I snapped away photographs of anime scenes characteristic of one of my favorite artists in the area, Julieta, I was stopped by a man who asked if I liked the art.  After replying that yes, of course I did- and let him know the artist was Julieta- the man replied that he was her father.  Stunned, we began a long conversation which culminated in my meeting Julieta as she rounded the corner. “Dad, you can’t talk to everyone who photographs my art!” she said in Spanish.  Being famous among the Street Art scene globally, it’s understandable her request for privacy.  As a famous artist, she is contracted around the world to cover sides of walls for art festivals and museum openings.  She’s flown to Peru and Italy to bring color and smiles to the streets.  She has a huge following and I’m certainly not the only one taking photos of her work.

But just as Street Art can be beautiful and fun to witness, like a tattoo, colors and acceptance fades.  Atlanta, Georgia in the US and Lima, Peru have enlisted task forces to clean up major city areas of Street Art, eliminating world-famous art pieces with a few swipes of white paint.  And though widely accepted across cities like London, it’s still an illegal practice.

Artists will always make their visions and perspectives known, however, and Street Art remains alive and well worldwide, forever morphing and improving.  On your next stroll, check out the art in your ‘hood.

Below are photos of street art I’ve come across in my neighborhood (El Carmen) in Valencia, Spain:

JulietaXLF: World renown, she paints Japanese anime girls with bright colors and happy faces… or just bright colors of wispy day dreams.  Perhaps focused towards children, these sprayed scenes make everyone feel lighter.  She paints on barns and museums, in villages and in major cities like Lima, Peru or Rome, Palerno and Sicily, Italy.

Cross Stitch Yarn Bombing: buildings with mesh wiring on the outside have yarn woven along the metal, creating a different delivery of color, but Street Art nonetheless.

Edgy Vinyl Photographs decorate exterior walls and have the same effect as paint, but with less wear and tear.