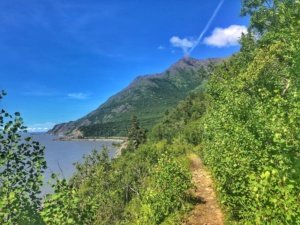 On a very narrow hiking trail overlooking Turnagain Arm, arguably the most scenic highway in the US (a stretch of road from Anchorage towards the Kenai Peninsula), I met a guy named Thomas from Barrow, Alaska.

Barrow is the northern-most town in the US, well above the Arctic Circle.  It’s the point where the Beaufort and Chukchi Seas collide and is a popular spot for whales.  Thomas is Iñupiat, an Alaskan Native, and grew up whaling, hunting polar bears, wolves, foxes, seals and walrus.  We intercepted on a trail called Windy Point that was pretty active with bears.

Since I had arrived in Anchorage, there had been 2 bear attacks, one of them fatal.  After one man had gone missing (his body later found), a rescuer from a search party was also attacked and survived with only leg injuries.  2 female bears had been put down since then, and autopsies were being done, but there were good reasons to be on high alert when hiking.

As we navigated our steps around giant piles of bear dung, I was able to ask him all my questions about running into bears in the wild.  For one- am I safe with what I have on me?  “That bear spray you’re carrying around?  That’ll just piss ‘em off,” he said with authority.    “Unless you’re face to face and can blind the bear, don’t bother using it.  Use that blow horn you’ve got, that should scare them away.”

“I read a sign instructing people to fight back with black bears, but to play dead with brown bears.  Is that good advice?” I asked.

“My grandfather always told me to fight back with any bear.  At least then you’ll still have your dignity.  And always carry a spear with you in case your gun jams.  Go for the eyes first, then the nose.”

I looked down at my hiking belt: bear spray, blow horn and cell phone.  No gun or spear.

“With polar bears,” he continued, “forget their eyes.  They have poor eyesight anyway.  Go for their nose.  They have such a strong sense of smell, they can sniff out their prey through ice.  You take that away from them and they’re handicapped.”

“And never eat a polar bear’s liver,” he went on.  “One taste and it’ll turn your hair white.  Any more than that and it’ll kill you.  You have to be very careful when gutting that bear.  And you have to cook it for a long time, like 12 hours.  The meat’s very tough.”

I asked him all about whaling.  They hunt for bowhead whales up in Barrow, which can grow up to 60ft and weigh 110 tons.  Success with 3 whales and the entire community is provided for the year.  In the Spring, 30-40 people are out on the water 24/7.

The Natives, as they are called (Iñupiat, Yupik, Aleut, Eyak, Tlingit, Haida, Tsimshian, and a number of Northern Athabaskan cultures), are Alaska’s indigenous populations.  (It’s offensive to use the term ‘Eskimo’ these days.)  In Barrow, 91% of Iñupiat households participate in subsistence living, which means hunting and gathering.  It’s not an easy life, with the arctic villages covered in permafrost year-round, the ground largely flat and treeless, and towns looking like abandoned temporary research facilities, but it’s home to many.  What keeps the people grounded is weaving in traditional life with some modern luxuries.

Keeping in tune more with traditional culture than modern day norms, communities depend on every single person, no matter their gender or age.  In the Anchorage Museum, a woman explains that her 2 1/2-year-old granddaughter collects berries in a small basket in the summer.  They make a huge deal when her little basket is filled.  This teaches her at a young age how necessary she is to the group and instills a strong sense of purpose.

I pointed out some bright red bear droppings to Thomas.  This bear was clearly eating the red berries lining our path.  “They seem to like these berries.  How old is that, do you think?”  I asked, pointing to the pile.

He held his hand over the dung and paused.  “It’s a day old,” he concluded.  I felt some relief.

Thomas’s advice was interesting, but I was fairly certain I wouldn’t be fighting bears, no matter the color, any time soon.  (Nor would I be gutting a polar bear.)  The best defense I’ve learned since hiking in Alaska and the Yukon is to make lots of noise.  Bears don’t like surprises, and if they hear you coming, they’re likely to move out of your way.  Or so you’d hope.

I wanted to ask Thomas more questions about hunting and how he actually feels about animals.  Like, does he have any pets?  But the invisible trail he was headed towards had arrived.  We waived goodbye and he was gone into the dense forest of the steep hillside.  I was left with my dog Moby, who darted ahead of me down the trail, and my apparently useless bear spray.

I have to say, after all that bear talk, I was pretty happy to get into the safety of my car at the end of the trek that day.

Photos of hikes and bears around Anchorage, Seward, Haines, and the Yukon: