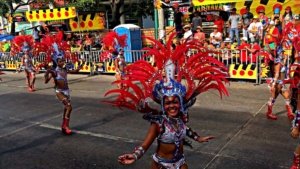 Turns out, Shakira’s moves aren’t so unique after all. In fact, her signature hip moves are the dance moves of her home town of Barranquilla, Colombia. Barranquilla is also home to the 2nd largest Carnaval in the world (after Rio, Brazil), the birthplace of actress Sophia Vergara, the Nobel-Prize-winning writer (and Colombia’s treasure) Gabriel Garcia Marquez, author of 100 Years of Solitude. . . and our very own Laura Gonzalez (known as LG) from Remote Year, Ikigai.  With LG’s planning, 20 of us went to experience Barranquilla’s Carnaval first hand last week.

What is Carnaval in Barranquilla? It’s Colombia’s once-a-year 4-day parade and raucous party preceding the start of Lent.  Starting in the 1800’s, this was the one chance the natives had to break all rules imposed by the Spanish Colonization. Debauchery and playfulness to this day ensues at full force for days, planned for months in advance. Bright colors, humor, dance, adorable kids and blazing hot sunshine are what make up the party. In the States, our version is New Orleans’ Mardis Gras.  Carnaval is celebrated in 5 continents, though names of it vary, and tend to include parades, excessive consumption of meat and alcohol (among other things), mock authority, reference circus and death, don masks, wear drag, and engage in street parties.

We stayed in a Hilton Garden Inn about 15 minutes from the craziness.  Though I felt guilty for staying in a US hotel chain in Colombia, its outside infinity pool on the 3rd floor and air conditioned inside was a nice reprieve from the hot and sticky streets, crowds, chaos, and loud music.

The easiest way to break down Carnaval is by the parade themes each day:

Day 1, Saturday, is the “Battle of the Flowers.”  This year, all 18 previous queens (Reinas) are paraded on floats, throwing flowers while drinking water and Gatorade on the side.  The parade is filled with floats, dancers, bands and Carnaval characters that will grace us with their presence over the next 4 days.

Day 2 is the “Parade of Tradition,” where we see many Cumbia dancing couples of all ages, floats with bands, and more characters of the parade.

Day 3, the “Parade of Fantasy” and the “Festival of Orchestras” perform synchronized dances (people of all ages) with jaw-dropping Shakira hip shakes, beautiful costumes of colors and feathers, and 5-year-old kids with better dance moves than I’ll ever have.  People of all nationalities in matching outfits parade behind floats, openly drinking, dancing, and celebrating.

Tuesday, Day 4, is the parade’s finale: this is the last day of Carnaval with “Death of  Joselito Carnaval.”  Legend has it that Joselito drank and danced himself to death over the course of Carnaval.  His coffin floats through the parade route with faux pal bearers, a funeral procession in tow, and people weeping.  Every so often, Joselito will come to life and pop up out of the coffin, followed by cheers from the crowd.  It’s a symbolic end to the festivities and a wake-up call to the upcoming solemn period of Lent starting the following day. 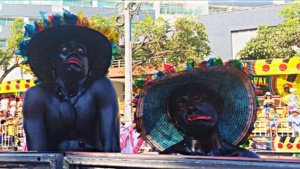 One of the main Carnaval characters is El Son de Negro. Coming from a politically correct country like the US, I cringed at the initial sight of children painted all black to portray slaves. Their mouths stained red to depict Betel Nut, they adorn flower straw hats and black shorts, and move their mouths in a consistent confused motion (sticking out their tongues and contorting their lips and face).  This represents how the first slaves mockingly responded to their masters.

Another character, Marimonda is the court jester of the parade and who gets funnier as the days wear on.  It was the poor’s inside joke of the wealthy.  His character has a bag over his head, elephant ears and a phalic nose.

The Cumbria dancers make up the traditional dances and outfits throughout the parade, but the child dancers-in-training steal the show.

The night time events include dance clubs set up in the street with plenty of plastic furniture and canned Aguila Beer to go around (a beer that was quite possibly the only advertising campaign in the whole Carnaval). My initial surprise was the ‘dirty dancing’ openly happening in the streets.  ‘It’s not sexual at all,’ my host informed me.  ‘In fact, that could be a brother and sister right there.’ Wow- I’ve never danced that way with my brother, but hats off to new forms of expression. 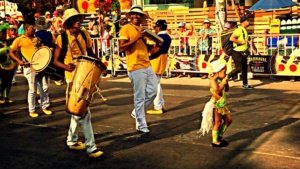 Carnaval was an experience I’ll always remember, and Shakira’s music and hip shake dancing will forever bring me back to our 4 days in Barranquilla.  While the parade may be more small-town local than Rio’s full-blown dance competition, it’s a traditional cultural enlightenment worth checking out.