Babysitting on Kangaroo Island (and other adventures)

Babysitting on Kangaroo Island (and other adventures)

Where is Kangaroo Island?

My 2nd Workaway experience was on Kangaroo Island, a remote island in South Australia that few Australians could locate and even fewer have visited.  Because of its geographical isolation and expensive ferry, this island with a wild past remains elusive even today.

In 1802, 20 years after the penal colony was in full swing up in Sydney, Matthew Flinders and his crew on the HMS Investigator discovered a large, unoccupied island while circumnavigating Australia.  (Having separated from the mainland some 10,000 years before, aboriginals considered it the land of the spirits and kept their distance.)  It’s said that the hungry men on his boat were delighted at the ease of killing scores of kangaroo (which had obviously never seen humans before), and thus, the name of the island was born. 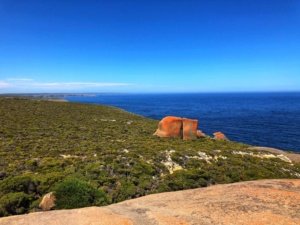 The island itself is about an hour boat ride off the mainland (through an 8.5-mile turbulent straight) and, in total, 3 hours from what is now Adelaide, South Australia.  At nearly 1700 square miles, it’s the 3rd largest island in Australia after Tasmania and Melville Island (about half the land mass of Crete and with the same width).  It was and still is a fairly lawless land, initially settled by seal and whale hunters infamous for kidnapping aboriginal women from Tasmania.  (A few of these women, legend has it, escaped by making the swim to the mainland.)  Authorities hauled off the original settlers in handcuffs, back in 1826, and resettled it as Australia’s first free colony in 1836.

Today, KI (local speak for Kangaroo Island) is a farming and fishing community, but most money is brought in from tourism.  Honey farms, sheep farms, spectacular rock formations, wildlife, and art are the main draws.  At a population of 4,400, everyone knows everyone (or in the very least knows of their family).  People leave their keys in the ignitions of their cars and keep their homes unlocked; it feels about 20 years behind South Australia’s mainland. 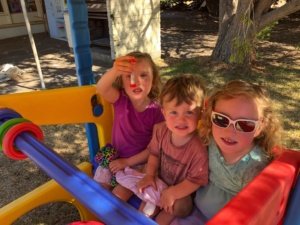 My Workaway detail for the week

How Did I Get Here?

I applied to a Workaway job on a sheep farm on KI where I assumed I’d be helping with a ‘veggie patch’, feeding animals, doing some house work, and learning the ropes of sheep farming.  I was a bit taken off-guard when I arrived (after 48 hours of travel from Queensland) to discover it was a babysitting job.  Within 20 minutes of discovering the obvious (but irreversible) miscommunication, I was handed 3 screaming children under the age of 5 (two 4-year-old twin girls, Aleeya and Bonita, and a 1-year-old boy, Artie) right as their mom headed off to work.  As the blood drained from my face, I realized the only time I had babysat was once in college.  I had always been drawn more to animals than children, but here I was, ready for some new experiences.

My first two days of babysitting were fraught with panic as I repossessed a handsaw one was waving around, rescued another from stepping on broken glass barefoot, saved another (via a world-record-worthy leap) from a head-first windowsill dive, and generally pleaded with them to stay off the rusty and broken swing set (to no avail).

By the third day, children running barefoot through broken glass was fairly normal, as was swinging on the broken swing set.  Balancing acts on backs of chairs and frequent dives from tables just went with the territory.  One was always crying, but it could be for as little as a doll that someone else was holding or as major as a body slam on a wooden floor.

So I became numb (in a short amount of time) to what had initially incited fear.  I started to enjoy our drawing sessions (though they didn’t last very long), our group reading times on the couch (though it was always the same book over and over), and I even the broken and rusty swing set (oddly, that thing stayed tried and true).   There was even a sense of accomplishment when I retreated to my room at the end of the night, which happened to be 8pm most nights.  Exhausted, I’d bar the door with my roller-bag and collapse.

So Much for Alone Time… 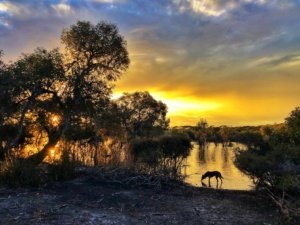 Chase, taking a drink during a morning run.

In the beginning, my only solo time of the day was a 45-minute run (before anyone else was awake) with the herding dog, Chase, through the sheep fields, and around the lagoon and eucalyptus groves.  I’d return to a curtain-less shower (we all shared one cement bathroom with mold on the ceiling, broken wall tiles, and no lock on the door- actually, there were no locks on any of the doors in the house) followed by a joyous greeting in the kitchen with 3 children intensely interested in what I was going to have for breakfast.  It was a surprise they were even talking to me after the breakdowns from the previous day, but I had to hand it to them, each day was a clean slate. 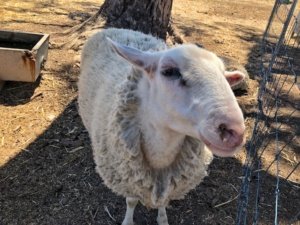 My host mother, Mel, was a 31-year-old 4th generation sheep farmer’s daughter who had grown up helping run her parent’s farm and eucalyptus distillery: Emu Ridge, one of the island’s tourist attractions.  I toured the eucalyptus distillery on my second day, followed by a visit to a honey farm and a sheep dairy farm called Island Pure.

Island Pure, the ‘sheep dairy’ (as they say), is where I learned how sheep are milked, the different breeds of sheep, and the volume of milk each breed is prone to produce.  I wanted to move to this dairy farm, it was such a simple, happy place. The sheep were so angelic and clean, I wanted to hug all of them.   They actually loved being milked and even pushed their way to the front of the line at milking hour.  The yogurt was the best I’ve ever had, and the Feta and Manchego cheeses were smooth with the right amount of saltiness.

My despair at babysitting turned into a profound experience and I found myself thinking of all my friends and family members who have been through (and are going through, because really- does it ever end?) the relentless and thankless job of child rearing day in and day out.  And here I was complaining about 10 days.

I learned how to change a diaper (thanks to the 4-year-old twins), how staying almost maniacally upbeat helped immensely, and that a promised surprise for good behavior (made up on the spot) can do wonders.  I also learned that almost every job compared to taking care of children is a joy and piece of cake.  You need someone to shovel shit from the chicken coop?  I’m your man!  Wipe mouse droppings from your 200 year old cabinets?  I can’t wait!  As cute as they were, any time away from the kids was a breath of fresh air.  I was actually paid cash for assisting in the distillery, bagging and sealing eucalyptus mints one afternoon, but I felt I should pay them instead- it was fun!  It was so much fun.

Discovering the Beauty of KI

By the end of the first week, a worker from the distillery lent me her temperamental Volvo with the words:  “This will probably break down on you, and when it does, abandon it.”  I finally had a way out of the house on my off-hours. 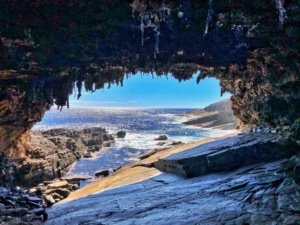 Kangaroo Island has spectacular rock formations (the most famous: the Remarkable Rocks), coves and bays, crystal clear water, cliffs, empty beaches, seals and sea lions (sea lions are seals, I found out), a large number of koalas, wallabies (which look like miniature kangaroos and are, sadly, frequently road kill), kangaroos galore, 2’ lizards, peacocks, feral pigs, black swans, pelicans, penguins, and so much more.  It’s an enchanting island, and probably kept this way due to the limited population and cost-prohibitive ferry ride.  (The ferry ride is $100 roundtrip to the island, but there are no taxis or car rentals once you arrive.  You either need to be with a tour group, pay a hefty fee to ship your car over, or know a local.)

Is this thing broken?

My get-out-of-jail-free Volvo had a couple of hiccups, namely dying while I was 50 miles from home one day in 110-degree record-breaking heat.  Luckily, hitchhiking is pretty common on the island, and I caught the 1st truck that was going my way.  I did have help getting the car started again the following day and learned it was just susceptible to overheating (one fan belt instead of 3 will do that, I suppose), and that I had to let it cool off before kicking it into gear again.  She overheated plenty in the coming days and I learned to be patient, car stalled on the side of the road, as the dry heat wafted over us and dust settled into the open windows.  Nevertheless, I had true love for that car; as far as I’m concerned, she was a gift from heaven.

For my farewell night, we had savory crepes for dinner, filled with vegetables and shredded beef, and Pavlova for dessert, an Australian favorite (which the kids waited in anticipation for my whole stay) made with meringue and topped with strawberries.  We traded hugs and I was actually told how much they were going to miss me.  “If you ever want to come back, you have our number.  We could always use help with the kids!” she called over screams.

I have to admit, I was a bit shell-shocked when I waved my last goodbye to Mel and 1-yr-old Artie, and hopped on the shuttle to the ferry.  This was one experience I’ll never forget: the magnificent beauty of the island, how the chaos of a home can turn totally normal, and how I may have dodged a bullet by not having kids of my own.  I breathed out a heavy sigh and closed my eyes… quiet.  It was such a lovely sound.