An Outsider in Our Midst: An Overdressed American in Namibia

An Outsider in Our Midst: An Overdressed American in Namibia 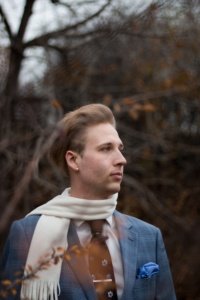 “Connecticut,” I said under my breath, looking up from a bag of onions I had slung into my shopping cart in Opuwo, Namibia.  The 20-something represented fall in New England: a preppy haircut, an untucked and clean soft-washed collared shirt; it was a back-to-school Abercrombie ad.  He was too clean, too American- and it made me stand out like a beacon in my surroundings, too. 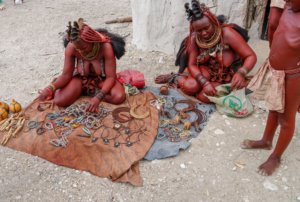 I may not look like the Himba women standing next to me in ‘OK Foods’ grocery store with infants wrapped like mummies on their backs, necks heavy with necklaces, boobs fully out in the open, short leather skirts around their wastes, their tight curly hair wrapped in a combination of butter, goat hair and ochre, a strange sweet smell surrounding them from smoke (instead of water and soap) they bathed themselves in nightly… but I still felt like I had attempted some sort of assimilation.

I looked down at my Ralph Lauren E. Hampton t-shirt, now stained with red African dirt, and my Gap knee-length khakis that were hanging on by a thread (I, too, had looked like this visitor not that long ago).  I thought about my dried-out and broken hair that was stuffed under my safari lodge cap, a far cry from the healthy locks just a few moths prior.  Even with Africa sandblasted into my clothes and hair, though, I was more like this clean-cut preppy than any local, and maybe that’s what stung. 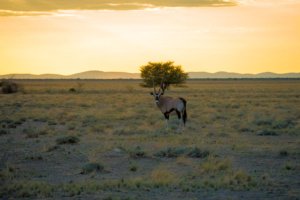 An oryx at sunset, Uukwaluudhi

2 months ago, I had arrived at Uukwaluudhi Safari Lodge, a game reserve in NW Namibia, 100km south of the Angola border.  We had an assortment of wild game enclosed in a 6,000 hectare conservation trust, exposing guests to a large portion of Namibia’s wildlife: giraffe, kudu, oryx, zebra, black-faced impala, springbok, red hartebeest, warthogs, hyena, jackals, and even cheetahs.  Visitors stayed in individual chalets where they could overlook the property, hear giraffes in the morning step carefully around their huts, watch red hartebeest during an evening game drive, or view oryx bullying each other near the main lodge waterhole.

I spent some mornings photographing animals from a hide at a distant waterhole for the lodge’s website, afternoons managing staff, and evenings helping with game drives.  Other days, I’d fix fence where hyenas had broken through, help repair mangled tires, varnish outdoor wooden furniture, work with the maintenance team using machetes to make way for a new road- or, like today, haul not only salt blocks, supplemental feed, and a 5,000L tank, but also purchase a laundry list of groceries for the lodge (all after repairing a blown tire).  We were so remote, it was an hour’s drive to the nearest store. 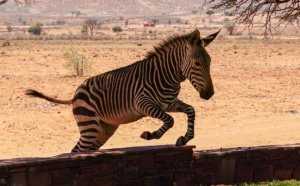 At We Kebi Safari Lodge where I had worked in southern Namibia (2 months prior), our two bottle-raised pet zebras were afraid of nothing… until wild zebras came near the lodge.  I’d watch them with their alpha stance scare away eland (who towered above the zebras) and wildebeest, but as soon as a herd of their own kind came into view, they would tear off in panic, galloping around to the back of the lodge and out of sight.

I admit, I’ve been known to avoid Americans from time to time when traveling abroad.  On Kangaroo Island, in Australia, I remember overhearing fellow New Yorkers complain about the surroundings, the husband belching loudly over his kangaroo sausage.  I wanted to melt into the floor, hoping they didn’t notice I was one of them.  In Namibia, however, I could count on one hand the number of Americans I had seen- most of whom I embraced with open arms.  Perhaps this reflection was too much like me.

I was now at the register, waiting for the lodge’s tax invoice.  Connecticut was in my line behind 3 Himba women, talking to an American girl he was with before she wandered back into an aisle.  Both of them looked uncomfortable and out of place.  Was I going to have to make conversation?

My invoice arrived and I headed to the exit door, handing over my receipt for the security guard to check, a gun slung over his shoulder, my foot tapping.

When I emerged from the store, Neil, my coworker, was waiting in the parking lot finishing his cigarette in the hot sun.  I was anxious to get going and hurriedly loaded the truck, looking over my shoulder.

It wasn’t until we were back out on the road with the trailer jerking behind us that I started to relax and even laugh.  Why was I so desperate to get away from those out-of-place Americans?  If they had been guests at the lodge, we would have shared stories and even contact information, promising to stay in touch.  It was just here, among the locals, that I felt like a child again in the schoolyard.

As the grocery store and the Himba capital of Opuwo disappeared, my silly behavior a distant memory, I realized I would never know who that guy was, where he and his girlfriend were going, or even if he was really from Connecticut at all.