An Outing With the Cairns Yacht Club: Cairns, Australia

An Outing With the Cairns Yacht Club: Cairns, Australia

In the land of sugar cane, crocodiles and the Great Barrier Reef, Cairns, Australia has a hidden gem:  the Cairns Yacht Club (or CYC as it’s referred to).  An inconspicuous boatshed sits across from some of the hottest tourist attractions in the area (like diving and helicopter tours of the Great Barrier Reef) and it houses the yacht club’s offices.

Most yacht clubs boast of elaborate facilities and an ostentatious entrance.  They’ll have offices for staff and meeting rooms for board members.  Their well-stained dark wood bars are centerpieces for nighttime events where members can hob-nob with each other and their guests.  In contrast, the CYC’s boatshed is their facility.  Covering about 700 square feet, it has a couple of small sailboats leaning against a wall, a handful of tables, about 12 plastic seats, and a desk for administration purposes that sidelines as a bar.  I’m sure they’d be up for fancier facilities, but they’re too busy sailing. 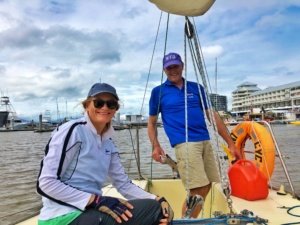 Hew and Joanne before the storm

I crewed in a sail race last month on Hew Mill’s J24.  I wasn’t quite sure if it was going to be a 1 hour race or 3, but wore my hat and sunscreen just in case.  It turned out to be a 7 hour race covering 30 miles.  So much for being prepared.

The morning started out innocently enough under sunny skies with puffy rain clouds.  The wind was whipping along at a steady 23 knots, which may have given away some of the events to unfold.  (25 knots and the race would have been cancelled.)  Despite having just come out of 5 days of record-breaking rain for the area (in itself a rainforest), we held our breaths in hopes that bad weather would remain at bay.

It was perhaps an hour into the sail race that the rain started.  Unfortunately, at around the same time, one of our crew members, Joanne, an intermediate sailor who recently had shoulder surgery, became seasick.  She realized, all too late, that the pain killer she had taken that morning instigated motion sickness.  For the foreseeable future, she was bent over the side of the boat dry heaving and looking miserable.  It was an ominous start to a 7 hour race; we were down to 2 sailors.

As we rounded ‘Double Island,’ a squall hit in an instant.  The seas were now 2-3’ tall white caps and the sails had come alive.  In a matter of seconds, the jib sheets undid their stopper knots and flew through the deck pulleys, blocks and sheaves.  In front of the boat flapping furiously was the jib sail, its lines entangled into a solid ball careening from port to starboard and back again. 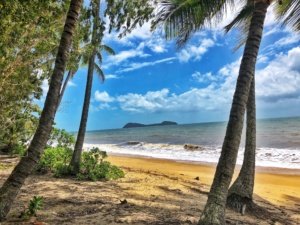 Double Island from Holloway Beach on a clear day

We couldn’t hear ourselves over the roaring winds and pelting rain, but Joanne and I climbed to the bow of the boat, holding on where possible while surfing a rollercoaster ride over the waves.  I attempted, unsuccessfully, to catch the swinging wrecking ball with one hand while holding onto a fixed mast wire (a stay wire) with the other.  Joanne stepped in and saved the day by catching the solid ball of lines and held it in place while the sail pulled ferociously in a tug of war.  With her holding the lines down for a brief time, I worked on untangling the knots.  Meanwhile, Joanne was screaming ‘I can’t hold this much longer!’, her words taken by the howling winds, gone as soon as they left her mouth.  After perhaps 15 minutes of pulling and untangling, I finally had one line free and threw it back towards Hew at the tiller, then started work on the other.  After another 10 minutes of white-knuckling the thrashing boat, wind and rain, we had unwound both lines, strung them through the sheaves, secured new stopper knots and tightened one line around the winch, settling the violently flapping jib sail.  Joanne, completely exhausted from the squall and near-death experience, resumed her perch, head leaning over the side and legs dangling under the safety lines.

The next 5 hours back towards the marina were mainly quiet outside of the howling winds and driving rain.  Hew, sopping wet, concentrated on steering, while I, gratefully, wore his only rain jacket as I helped tack our way home. 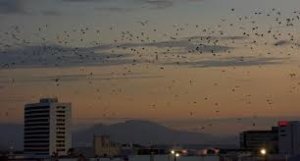 As we pulled into the marina, the fruit bats were taking their nightly flight across the waterway in droves.  The sun was setting, the rain had stopped, and the clouds had lost their black shadows.  We shakily pulled down the sails and motored into the marina.  I don’t remember ever having been so happy to see a boatshed in my life.  We had survived.  And this, apparently, was just a normal outing with the Cairns Yacht Club.