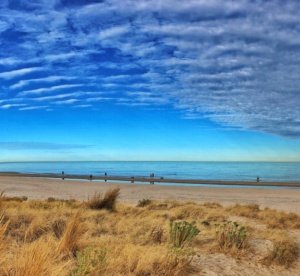 Sea Cliff, my beach in Adelaide

I felt completely at home in my beach suburb of Adelaide, South Australia, a city of about 1.3M with a similar layout to Philadelphia nestled in Australia’s wine region capital (one of the top wine capitals in the world, right up there with Bordeaux and Napa).  House sitting again after 10 days of a Workaway job (babysitting kids on Kangaroo Island), I was looking for some quiet and respite.  This location was ideal for that, plus I had a car, a home and pets, and was finally able to catch up on some writing I had been putting off.

My bungalow 1-bedroom home in Seaview Downs (above a beach called Sea Cliff) sat next to a school field that brushed up against dry desert hills, perfect for hiking with Nikki, the kelpie (Australian cattle dog) I was watching.  We hiked in the mornings and evenings, and I was always amazed by the clouds.  Perhaps it was the way the hills ran down to the ocean and cut the air flow, but they were routinely like hyphen marks in the sky, evenly spaced.

Fiona, a corporate sales person turned natural healer who embodied calm, beauty, practicality and fun, quickly became a friend of mine.  We were introduced through the owner of my home and ended up walking our dogs along the beach and coastal cliffs in the mornings, doing an outdoor yoga class, and trying out a stand-up paddle boarding session.  We even visited a famous vineyard, D’Arenberg, and walked through their latest modern art showcase building that felt like Alice in Wonderland meets Charlie and the Chocolate Factory. 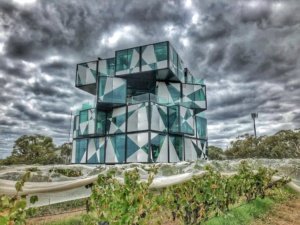 Despite quitting drinking almost 2 1/2 years ago, I take a sip every few months as a reminder that a) I don’t like it and b) it doesn’t hold some crazy power over me.  I no longer have to drink, I tell myself happily, as I felt I did trying to be one of the guys and outgoing in my past life.  Every time I take that sip, I’m always reminded that while it may taste okay at best, it makes me feel tired and zapped of any happiness.  My body just cuts to the chase:  skipping over the fun, exuberance and buoyancy, right to tiredness and depression, all in about 5 seconds.

But being at this beautiful vineyard and seeing that they had a unique type of wine- a bubbling Shiraz- I felt slightly compelled to give it a taste.  We were in their modern Rubix-Cube building (aptly named the Cube) and the top floor is a wine tasting room where staff lined up numerous glasses to offer a variety of wines offered.  After a couple of sips, my typical exhaustion flooded me and I realized, as I always do, that it had been so much more fun taking in the surroundings with a clear mind, even simply watching others drink.  As much as I regretted taking the sip because it ruined my next 5 minutes, it was an acknowledged relief that I no longer drink.

I wasn’t the only one in the area who didn’t drink.  Hayley, the owner of the house I was looking after had quit drinking just before I had, almost 3 years ago at this point.  Never having been one to exercise, she started focusing her energy on walking, then hiking.  The reason she needed a house sitter for two weeks was because she was doing a solo hike through the rugged (and rocky) mountains of Tasmania.  She now regularly does 20km (12miles) for her morning walk.  Just a month before, she had met the love of her life who had also given up drinking at around the same time, and for his outlet, he took up distance running.  I’m not talking 5km here and there.  I’m talking ultra-marathons.  Trevor, who I would meet with and go on 2 back-to-back grueling trail runs- 7 and 12 miles respectively, had completed 9 ultra-marathons in 20 months (and he just STARTED running 20 months ago).  In 5 days time after our 12mile run together, he was off to New Zealand to run a 100mile race that would take him 32 hours (straight) to complete.  As a side note, they had both lost over 80 pounds since they removed alcohol from their lives, started exercising, and eating healthier.  It’s nothing short of miraculous what people can do when they stop drinking.

Aside from the 2 runs, Trevor took me to the family run Gorge Wildlife Park, potentially my favorite wildlife park in Australia.  Over 300 species from all over the world are maintained in this beautiful environment, including a lot of local animals.  I had the pleasure of holding Claire, the same name as my very missed grandmother (which made it even more special), and I never wanted to let go.  It was exactly as you’d expect in holding a koala… like a 25lb small bear with feather-like fur.

We talked to the owner who grew up on the park after his father started it in the ’60’s.  Just me, Trevor, and the owner, watching as the the emus and ostriches ransacked our bird feed bag and the owner profusely apologized for their behavior.  I couldn’t stop smiling.

My first week in Adelaide, temperatures reached the 100’s for nearly 7 days straight.  The brick houses in the area (like mine) stayed hot through the night, even as the air temp cooled.  Meanwhile, the ocean looked deceptively welcoming:  light blue, crystal clear, and calm as a lake.  Try as I might to have a different outcome, I was stung every time I got in the water.  Welts rose on the backs of my legs and thighs (a friend of Fiona’s was stung right across his face that same week… at least I could cover my welts if I needed to, but that poor guy…).  The culprits were small pink jellyfish with long tentacles.  I resorted to paddle boarding to stay above the warm summer waters, which is tough to complain about.  Cold showers and finding shade was crucial that week.  When the heat wave did break, however, it was the most pleasant place to be. 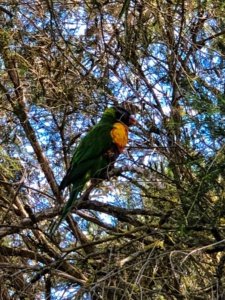 The house I took care of had an atrium-like room off the back with sliding glass doors overlooking a thick green backyard, shaded with fig and peach trees and was bordered by green grape vines lining the fence.  It was a quiet spot for completing the travel e-book I had been working on, in addition to catching up on research.  Rainbow Lorikeets filled the fig trees in the mornings and at dusk, while pink and white cockatoos swooped in occasionally and flooded the neighboring field.  I even had a foot-long blue-tongued lizard join me in the atrium, curled up around a green golfball hissing at the cats.  Who needs a wildlife park with these surroundings?

Beach life here was easy to get used to (despite the heat wave and onslaught of jellyfish).  I had new friends and exercise buddies, a family of pets and so much more to discover in the area.  But I knew I’d be off again as sure as I had arrived, and would soon be marveling at the sites on the Great Ocean Road.  Adelaide, however, will be a home I’ll happy return to at any time.