About That Journey… The Inca Trail to Machu Picchu

About That Journey… The Inca Trail to Machu Picchu 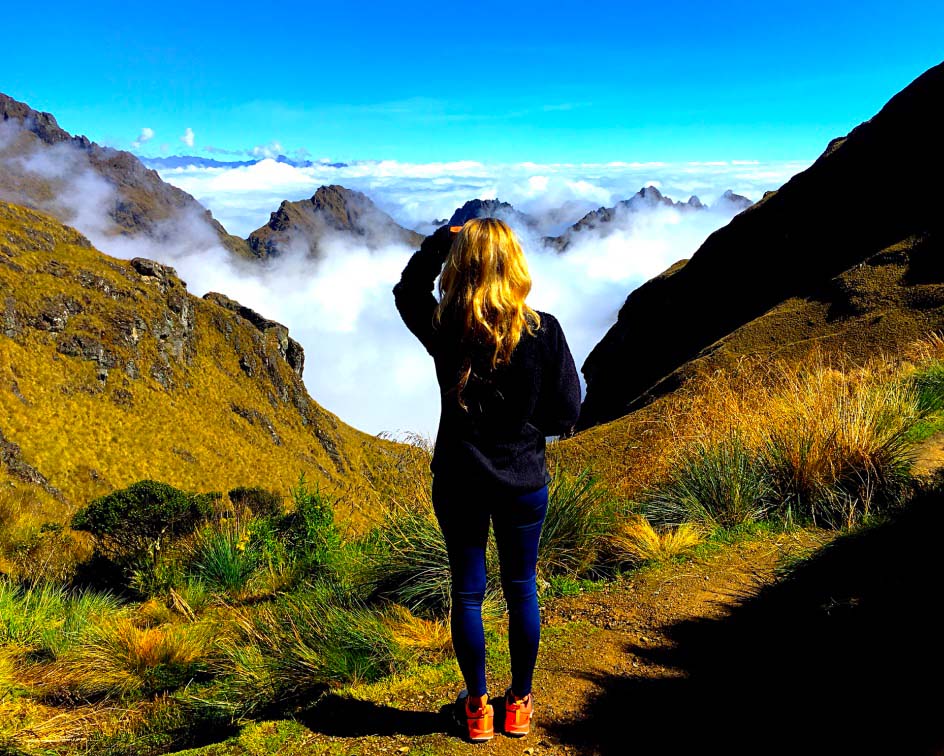 Me, overlooking the Cloud Forrest at Dead Woman’s Pass

Last week, I returned to Lima from a 4-day Inca Trail trek to Machu Picchu.  It was an excursion my friend and I had been planning for over a year.  Filled with stone stair cases, high altitude passes, and Incan history, the trail was every bit as challenging and breathtaking as I had hoped.

Who you travel with can make or break any trip, and I was lucky enough to have a dear friend from college join me- one who can handle extreme discomfort and emergency situations, usually while cracking jokes.  This may not be Everest, but hiking and camping for 4 days on trails with names like Gringo Killer and Dead Woman’s Pass can raise even the toughest hiker’s heart rate.  My favorite part of the journey, aside from the sight of Machu Picchu bringing tears to my eyes, was learning about the Incas from our native guide throughout our 4-day trek.  I’m not gonna lie: none of our prep-research included details about the spiritual trail built by the Incas.  It was all about booking spots 6 months in advance (only 500 hikers allowed to enter the trail per day), what equipment was needed, our weight limit for said equipment, and of course the climate and difficulty.  Hardly any of our groundwork explained why this specific route was a pilgrimage for the Incas, and why so many people have wanted to conquer it in the last 100 years. Thankfully, our guide filled in those blanks.

The trail itself is 45km (or 28 miles) long.  Maps will often refer to the trail as starting at kilometer 82: Piskacucho (altitude 8,923ft) and ending at kilometer 45: Machu Picchu (altitude 7,873ft).  But in between the ‘start’ and ‘finish’, you’re exposed to many Incan archeological sites (we saw 5), breathtaking mountain passes with serious altitude (13,800ft being the highest), and multiple climates: arid to jungle.

The Inca’s architectural jujitsu, understanding of health, and knowledge of the stars is something still left unexplained.  They had an expansive presence in South America with over 25,000 miles of trails connecting their short-lived 100-year rule (1438-1532AD) from top to bottom of the continent.  This trail (which makes up a fraction of their legacy) is special because of the preserved Incan city of Machu Picchu at its end, a spiritual destination existing in stunning natural beauty.  Only discovered in 1911 by Hiram Bingham, Machu Picchu was spared the standard Spanish destruction seen elsewhere in South America.  Lead by our multi-lingual fearless leader, Juan Carlos, we learned of everything from modern Inca Trail races to the medicinal plants that lined our trek.  Though many of the Incas were wiped out in the 16th century (their population went from 14million to 1.5million), there is still a large indigenous population in Peru to keep the memories of their ancestors alive.

One of my favorite stories we were told was of a professional race completed on the Inca Trail in 2004.  Sponsored runners showed up with the best shoes, running shorts, CamelBaks, and gels.  And then one unsponsored porter showed up in his sandals, carrying only a wad of coca leaves to chew on.  Instead of water, he downed a pitcher of chicha (the indigenous equivalent to beer), and proceeded to blow everyone out of the water with a 3 hour and 45-minute trail record.  The next finisher had a time of 10 hours.

We had 11 porters supporting 6 of us, and we’d often get passed by them as they ran by us on the trail (“Mountain-side!” our guide would direct us as we scooted out of their way) carrying 50lb packs of everything from our sleeping bags and tents to the food and plates of the campsite.  We stopped every day for lunch (followed by a siesta) and of course at night, just in time for a ‘happy hour’ of tea and popcorn before an elaborate dinner always made from scratch.  (The food was off the charts and deserves its own blog post.)  Every porter from the chef to the janitor carried 50lbs, and every scrap of trash was removed from camp when we left.

Our guide was our leader, teacher and friend, and he got to know everyone’s hiking capabilities and personalities on the trail.  My friend Liz and I joked that we became immediately lost after waving goodbye to Juan Carlos in Aguas Calientes, just hours after leaving Machu Picchu on our final day.  We wouldn’t have anyone to tell us when to get up, when to eat, or when to throw our packs on anymore.  As we forged our own way, limping, toward the train back to Cusco, a Peruvian hairless dog to my right and Liz and her new alpaca blanket on my left, we agreed that this glimpse into the Incan past truly had been the trip of a lifetime.

Alpaca Expeditions is the tour company we used.  It was founded by a Peruvian Porter who only hires locals.  From the beginning, they have paid their porters well, clothed their porters in everything they would need for excursions, and served gourmet food to guests.  No other tour group provided these essentials, though many have copied their model since.  $680/4-day Inca Trail