A Visit to Lidice: a village wiped off the map

A Visit to Lidice: a village wiped off the map 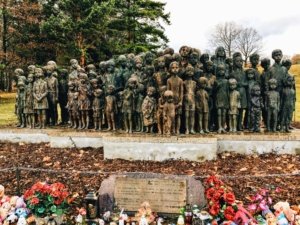 Overlooking the fields that had once been Lidice: statues of the children who perished.

Do you remember Lidice?  If you didn’t live during WWII, come from Germany or Czechoslovakia, there’s a good chance you’ve never heard of it.

Lidice was a sleepy farming town, 22 miles outside of Prague, which supplied miners to a nearby coal mine.  The town was completely destroyed by the Germans during WWII, mistakenly eliminated in retaliation to Reinhard Heydrich’s assassination, Hitler’s 3rd in command.

Without getting into too many details, Germany took control of Czechoslovakia in 1939 and Reinhard Heydrich (the creator of ‘The Final Solution’) was placed in charge.  In turn, the Czech president and a group of military personnel fled the country to Britain, aligning with the Royal Air Force (RAF), where they came up with a scheme to take out Heydrich.

With a little luck and help from citizens who housed the parachuters and assisted in plans, 2 men completed the assassination.  (A great movie was released on these events this summer (2016), called Anthropoid.  The operation was ‘Operation Anthropoid’.)

The retaliation, however, came at a severe cost.  One of the unfortunate victims of the assassination was the town of Lidice.

As the Germans scrambled to find the people who did this, a letter was intercepted.  The letter was from 2 people having an affair.  It was written cryptically and looked suspicious.  Its rightful owners were tortured until the town of Lidice was revealed as a place the 2 men were from, and that they were now in the RAF.  The Nazis went after this town methodically and completely, wasting no time.  Unlike other cruel Nazi actions which were hidden from the world, this monstrous act was declared as a consequence to those who crossed Hitler.

The buildings were detonated, burned, and bulldozed.  The cemeteries were razed and remains covered in lime.  The landscape, including the hills and lake, was moved.  The Germans spent a year making the village unrecognizable and even had the name removed from maps.  They literally wiped Lidice off the map.

Where Lidice used to be, there now stands a memorial.  The new town of Lidice overlooks the memorial and the now empty fields; it was built in 1949 for the women and children who returned.  This is where we met one of the orphan survivors, Mariya Shumakova.

A woman of 84, Mariya walks with a cane and has the sweet, kind face of a grandmother bearing gifts.  She sat with 12 of us and told her story through a translator.

June 10, 1942, Mariya (then 10) and her family, like every other family in town, were woken at gunpoint and told to come with the German authorities who had set up a headquarters overnight.  No one knew why they were being marched out of their homes or what they had done.  Men over 15 were taken to the church, and women and children taken to the school on the hill.  The men were executed 5 at a time, the next in line forced to stand in front of their fallen friends and neighbors to receive the same fate.  A 14-year-old boy was one of the victims, having gone with his father to relieve the mother of watching too many children.  All 173 males were executed in addition to 10 more who were tracked down later: in jail, in the hospital, and staying with friends in other villages. 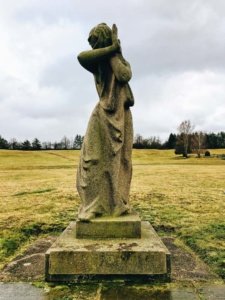 Where the school house had once been: 3 statues of women covering their eyes.

The women were separated painfully from their children and sent to Ravensbrück concentration camp, though they were told they would see their children in a few days’ time.  The children were put in vans and sent north to a concentration camp in Poland: Chelmno.  Those that looked German enough were sent to orphanages, infants sent to hospitals, pregnant women forced to have abortions, and 81 gassed in mobile vans.  Out of the 105 children, 17 returned home after the war.

Mariya was one of the children Germanized, which meant she spent a year in an orphanage with other children from different countries and taught the language and mannerisms of German children.  If they spoke in their native tongue, they were beaten.

An older, kind German family who never had children adopted Mariya a year later.  Her new family never suspected she was from anywhere other than Germany, so when the war ended 2 years later and there was a mad search for the children of Lidice, imagine their surprise as Mariya was discovered by the authorities and removed immediately.  She was sent back to Czechoslovakia and reunited with her mother who, having survived the concentration camp (with only half of the other 184 women), was now in the hospital with Tuberculosis.  Sadly, Mariya had forgotten her native language of Czech: it had literally been beaten out of her.  Mother and daughter had to have everything translated during their brief reunification.  Since the doctors feared Mariya catching Tuberculosis, they were separated after this first meeting, never to see each other again.  Her mother died a few months later.

Mariya’s Czech language returned to her.  She moved back to Lidice, in with her aunt, and finished school.  She would grow up to have a full life: get married, have children, grand children and great grandchildren.  She tells her story to outsiders who visit Lidice to this day, passing along the tradition of keeping the memories of Jun 10, 1942 alive from the mothers before her.

The German’s grotesque act horrified the world.  In 1942, immediately following the event, a British mining town created a charity called ‘Lidice Shall Live’ to raise money for rebuilding the village after the war.  Countries around the world renamed their own towns Lidice; a street in Sofia, Bulgaria was named Lidice; a neighborhood in Illinois changed its name to Lidice; a memorial in Phillips, Wisconsin was created; and films, books, orchestral compositions and plays were made in its memory.

In the last few months I’ve been to genocide museums, a concentration camp, a Nazi prison and Jewish ghettos.  I’ve been to a town that no longer exists and at the same time exists all over the world.  The only thing we can do to prevent these horrors from happening again (and again) is to educate, to unite and object, to tell stories like Mariya’s… and remember places like Lidice.

The Lidice memorial recognizes all other towns around the world who suffered similar fates.