A Stopover in Tasmania

A Stopover in Tasmania 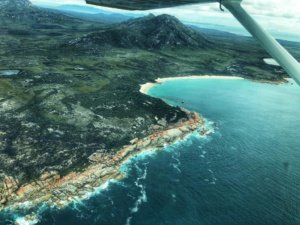 Flying 1,000ft over the NE corner of Tasmania and banking left towards Flinders Island in a 1978 4-seater Cessna, it occurred to me how little I had known about Tasmania just a week before.  Here I now was, flying over the Bass Strait: a cruise ship below gliding silently through light green water near an island of rocks covered in seals.

How did I wind up here? 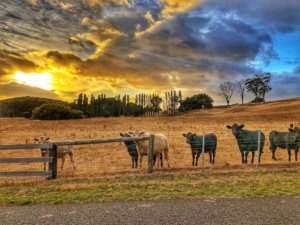 Cows where I stayed in Sheffield one morning, across from Jeanette’s farm.

When the dates for a house sit job didn’t line up correctly for me or Jeanette (the home owner and now new friend), she offered to show me the island of Tasmania a month earlier than her departure date.  Her guest quarters would be available, she said, and she’d love to repay some of that American kindness she had received years earlier in the States.

So, what and where is Tasmania?

Tasmania is the 26th largest island in the world.  Like Kangaroo Island (KI), it was created 10,000 years ago after rising sea levels separated it from the mainland.  Unlike KI, Tasmania (Tassie as it’s known by the locals, or Tas for short) had remained inhabited by aboriginals (a population of 7-10,000 at some estimates).  Though discovered by Abel Tasman in 1642 (after his discovery of New Zealand), it wasn’t known to be an island until 1803 when Flinder and his men arrived and circumnavigated it (the same group who slaughtered all those kangaroos on KI).  Shortly thereafter, it became the second largest penal colony by the British after Australia’s mainland, ultimately hosting 40% of Australia’s prisoners.  By 1867, the new settlers wiped out every last one of Tasmania’s full-blooded aboriginals- by all definitions, a genocide, and a lasting scar.

There are other sad endings in the island’s history, one being the extinction of the Tasmanian Tiger in 1936 when the last one died in captivity.

The ‘tiger’ (or thylacine, its true name) had been an odd-looking marsupial: a short-haired hyena-look-alike with a sort of kangaroo tail and tiger stripes.  Its mouth could extend (gaping) at 80 degrees (oddly, the Tasmanian Devil has a similar gape, though the Devil looks more like a rat the size of a small dog).  It’s amazing what can happen to animals when land is in isolation from the rest of the world’s evolution for millions of years. 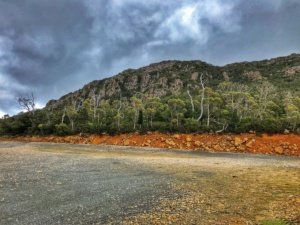 Tasmania is south of Melbourne by 100mi, the last stop before Antarctica.  Its rugged terrain is full of rocks.  Boulders the size of cars rest on mountains, and fields are often cleaned diligently of large rocks by farmers, only to be replaced by a new set as the soil shifts again.  It’s an agricultural state, though 50% of the population lives in the capital city of Hobart and 45% of the land belongs to national parks and reserves.

I stayed on 3 different farms during my week-long stay and learned 3 different styles of farming: Jeanette who raises chooks (chickens), ducks and sheep, but also has a dairy consulting business that has her flying overseas often; Michael, Jeanette’s boyfriend (and Cessna pilot), whose land borders the Bass Strait on the NE corner of the island and reminds me of the movie ‘Out of Africa‘; and the Colvin’s, about 30 minutes outside of Launceston who run nearly 20,000 sheep and run a very tight operation, where every pound and blade of grass is accounted for.  I had a wonderful time staying at all 3 residences and was actually allowed to help out on the properties and pitch in on occasion.  Overall, it was the hospitality of the Tasmanians that stuck with me: I immediately felt welcomed and at home.

A DIY nighttime safari and a remote art piece.

One night, on Michael’s sheep farm after dinner, we went out in his pickup truck (or ‘ute’ as they call them in Australia, short for ‘utility truck’) with a spotlight looking for native animals.  We spotted dozens of wallabies (small kangaroos), but also about 10 wombats (one came right up to my spotlight, blinded, determined not to deviate from its path).  They look just like small stuffed bears on all fours.  We saw many possums in trees (they’re much cuter in Australia with thick furry tails and small round faces with big eyes), but the most remarkable sighting was a Tasmanian Devil.  It was racing away from us and at first I thought it was a black cat with a broken tail, because that’s apparently what they look like.  They have a determined lope and their tail is crooked at the halfway mark. 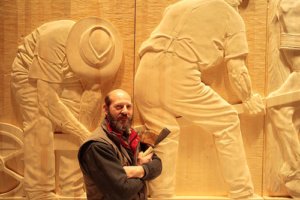 Another afternoon, on a day of torrential rains and cold weather, Jeanette and I took her ute up to the middle of the island, over mountains and past large lakes, to see a thought-provoking wood carving installation an artist, Greg Duncan, had worked on for over a decade.  It’s called The Wall in the Wilderness and is a montage of scenes, over 300ft long, that tells the story of Tasmania Highland’s history.  The settlers, the indigenous, the extinctions, the hard life that many lonely men in the area faced, and finally the women that were brought down to keep them company.  Ultimately, it’s the heart-wrenching story of a widow and her young, now fatherless child (a result of the unforgiving environment) that completes this tale.

As we touched down on the dirt runway of Flinders Island, Michael, Jeanette, Billy (Michael’s female vizsla), and I made our way into the small town to watch the barge take out the weekly cattle to the mainland after dropping off the island’s weekly supplies. 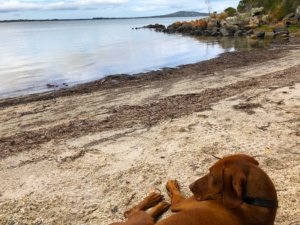 We sat outside the village pub, up on a hill overlooking the Bass Strait with Tasmania in the distance, the sun trying to break through a cloudy sky and the wind blowing at a steady clip.  We chatted with residents who are also farmers (Michael’s sister and her husband, a born and bred local) and an English shop owner who married a local as well and started a wonderfully named knickknack shop called ‘The Bizarre Bazaar’ and his most recent creation, selling condiments and cocktail enhancements, ‘The Condimental’.  What I noticed about all the natives I met on this 800-person island off the coast of Tasmania is that they were all very well educated, had schooled abroad and traveled the world, and always preferred this isolated and remote island over anywhere else.  Without a private plane or decent boat (and a lot of time on your hands to sail across the strait), a $400 flight was the only way off the island. 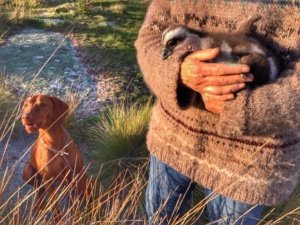 Billy and I climbed back into the rear of the plane as Michael and Jeanette started up the engines.  We took off again, stopping at another island (this time a private island owned by a group of investors, one being Michael) to check out the Cape Barren Geese and some cattle kept there, then cornered over a wind farm next to Michael’s property before landing back on Michael’s personal runway and sliding the plane into the garage. 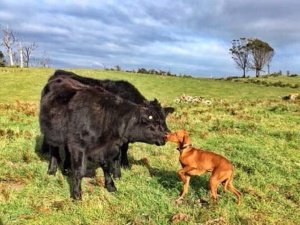 No big deal, just a Sunday afternoon in Tassie dusting off the old puddle jumper and checking in on the neighbors on a nearby island.  It’s quite a life, being a farmer down under ‘the land down under’.