A Return to Lisbon

A Return to Lisbon 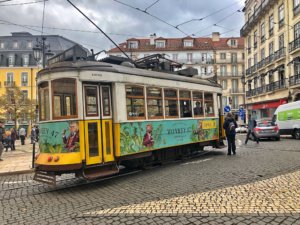 Ever since I left Lisbon three years ago, I’ve wanted to go back.  Time passes and new ideas crop up; other destinations take a front seat.  I sometimes dream about the healing sunshine, unpretentious street art, cobble stone sidewalks and cheerfully tiled homes.  I remember running through the hilly, eucalyptus-lined park of Monsanto, walking along the riverfront with views of the the Golden Gate Bridge’s replica (Ponte de 25 Abril), or walking through downtown as the sun set, the tiles changing colors with the sky.  Whenever I hear of a friend or cousin visiting Lisbon, I feel a pang in my heart- it’s a reminder that I’m letting such a special place slip by.

About a month and a half ago, while scrolling the internet from a medieval village in France, I applied to a property with horses and dogs in SW Portugal, near the Algarve.  I was the only person to apply with horse experience and got the job almost immediately. 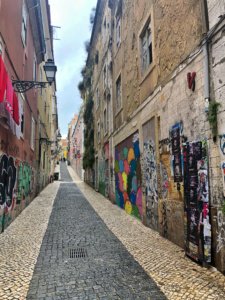 So a couple of weeks ago, I flew into Lisbon and spent two nights in the city before driving south to the countryside.  Being there was a flash-back to the start of Remote Year in 2016.  The streets were familiar and the city seemed smaller than I remember, like when you return to a place you only knew as a kid.

Wandering through the downtown in the rain was a wake-up call that Lisbon’s August weather isn’t all-year ’round.  I was also struck by the mob of tourists and trendy organic restaurants with features like avocado toast on the Tram 28 route up into the historic neighborhood of Alfama.  WebSummit was in session, which may have been the reason for the overload of people, but the rain, the omnipresent American accent, and the overwhelming abundance of frivolous graffiti seemed like a real downgrade to my memory.  And to add insult to injury, prices for hotels and Air BnBs were just as much as rooms in Paris. 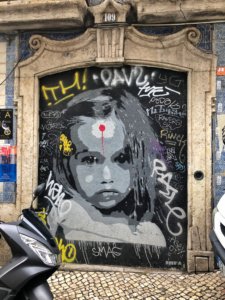 One of the advantages to Portugal several years ago was how inexpensive it was.  Referred to as the ‘Greece of Western Europe’, we patted ourselves on the back for finding a grungy, slightly crumbling, off-the-beaten path locale.  Sure, the 1755 fire and earthquake wiped out most of the ancient buildings of the city-  and so what if the castle on the hill (Sao Jorge) was actually constructed 60 years ago?  There’s still an 18th century aqueduct, a remaining skeleton of a 14th century Carmelite monastery, and Alfama (the one neighborhood to withstand the earthquake) with its steep cobble stone streets and Fado music.  The history was in the people, not necessarily in 1,000-year-old cathedrals.  We nodded to each other back then about how smart we were to come here and save money while avoiding the busloads of tourists in Rome.  Now it seemed like the word had gotten out and we were paying a premium for a place that was increasingly more tattered. 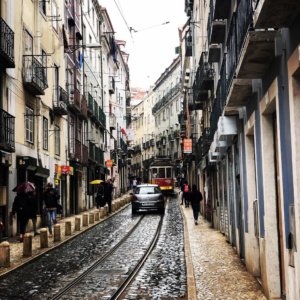 But weather and conferences can transform a city completely, I realize, and I still enjoyed my time wandering the familiar streets and following the slow-moving trams as they climbed the hills.

Hanging with a Local

My Air BnB host called me in the afternoon and wanted to hang out, right while I was navigating the heavily crowded Time Out Market (a market that had been relatively new and empty three years ago).  I gladly left the masses to meet her for a walk in the neighborhood where she had grown up.  It was an upscale neighborhood closer to the airport, free of expats and tourists, with fancy Portuguese shops, restaurants, and an indoor market that had been around for a hundred years.  She told me about her three-year management consulting career in Angola and the new shoe company she’d created since returning to Portugal and having a son.  Back in the apartment that night after hitting the market, we made a steak and salad dinner and looked out over the long park of Alameda from her high-rise balcony while discussing business strategy and Portuguese culture.

I was glad the price of Air BnB’s and hotel rooms had gone up, I never would have gotten a private room in someone’s apartment otherwise, and certainly would have missed out on getting to know a local.

But What Did I Learn? 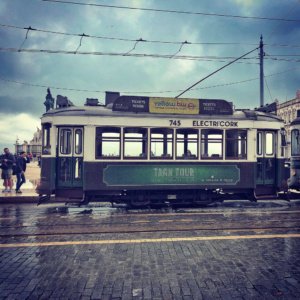 Tram by the waterfront, Lisbon

Looking back over the last couple of weeks at my experience in Lisbon, I’ve heard myself grumbling about how the city has changed, how I was unlucky with the weather.  But I realize it’s really all perspective and mindset.  So it was rainy and crowded, so what?  It was also glistening and bustling.  Money is pouring into the economy, and apparently their drought is over.  They’re also serving greens in forms of avocado toast, which was hard to find three years ago.  (I usually ate at home since I wasn’t a fan of salted cod, the staple food.)  They were now catering to global tourism and being rewarded for it.  Memory is also fallible, and while it may not have rained that often in August 2016, there were plenty of tourists back then, too- I just choose to remember my mornings and evenings walking through the quieter cobble stone streets with the golden light and small Portuguese men tilting their hats towards me.  In reality, the downtown scene was always packed with people looking up, cameras dangling around their necks.  I was often one of them.  In my three year absence, I’m glad the city is flourishing.  It’s a little selfish of me to think the city would stay exactly like it was in my memory, deceptively rose colored.

I feel very lucky I was able to come back to Lisbon and get a new perspective on a place I hold so dear to my heart.  I also know that when I do return in the future, I’ll inevitably be surprised by its transformation once again.