A Remote Year Reunion in France

A Remote Year Reunion in France 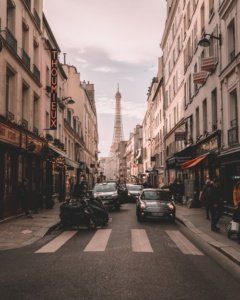 “Madam, we have a problem.”  The Hertz rental car man at the Paris airport said, pointing to a deep scratch on the front bumper of my rental car.

My mind flicked back to two weeks earlier.  I was one of the few people renting a car for our two-year Remote Year reunion, located an hour outside of Paris.  Most of the others had chartered a bus, but I needed a car for where I was going after our four days together.

The drive from the airport to the main train station in Paris was harrowing, mainly because cars seemed to be running red lights, but it was there, in front of a Burger King, where I spotted Janet, my fellow Remote Year conspirator and copilot.  She waved, stubbed out a cigarette, grabbed her bag and wheeled it over a few lanes to where I was briefly paused in the middle of rush hour traffic. 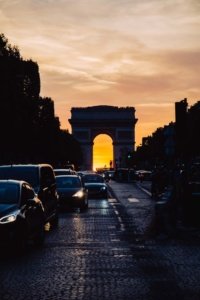 “Well this worked out,” she breathed and sank into the passenger seat.  I hit the gas and launched us back into the stop-start jolt of cars.  It was Monday at 5:30pm and we had front-row seats to what seemed to be an after work sport: Vespa Slalom.  With briefcases slung over shoulders, and hard-case trunks hovering over back seats, businessmen weaved motorcycles within inches of delivery trucks, grand monuments, and my sideview mirror.  “That takes some real balls,” I found myself saying in awe when a well-dressed businessman sitting astride a vespa swerved in front of me.

By the time the last bit of light escaped from the sky three hours later, we had emerged from the Parisian countryside to a crumbling castle at the end of a field facing multiple stone homes and event spaces.  Forty of us had made the trek from places like Toronto, Istanbul, San Francisco, New York, London, Malta, and everywhere in between, and we had this property all to ourselves. 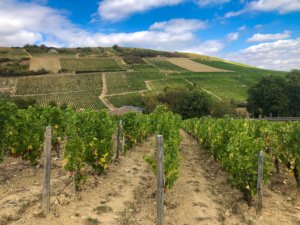 What seemed to me an attempt to limit the food consumption to meal times (the catering service regularly dropping off delicious french cheeses, breads, salads and patés), we had scheduled group activities in the afternoons- like golf, bocci ball, and wine tasting.  At night, we had self-organized dance parties, an actual wedding one afternoon, and an orchestrated murder mystery experience. 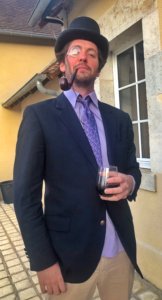 Brian wearing a monocle for the wedding

The best event was our wedding re-enactment.  Becca and Jacob had gotten married in Central Park’s Boat House the previous month and we replayed the celebration to match our surroundings.  Two online-certified ministers from the group married the Jewish couple, calling out for the audience to toast each other throughout the ceremony.  The bride was given away by a cigarette-smoking mother and a father sporting a monocle, top-hat, and pipe.  Like a real wedding, white chairs faced the castle on either side of an aisle, we threw confetti (that we then had to pick out of the grass for the rest of the week), and gave inappropriate speeches.  In the end, it was more like a Saturday Night Live skit than a wedding. It was the perfect celebration for friends who balk at tradition.

A couple of the guys organized a golf excursion for twelve willing, mainly beginner, golfers.  “How do you say ‘yes, we all have handicaps’ in French?” Sami asked at the reception.  The club begrudgingly parted with three carts for twelve of us, clearly looking forward to the cash, but unhappy about the foreign invasion.  Along with us alternating who rode in carts, half of us walking the rest of the time, a whiskey bottle was being passed around or left on a green for the next foursome.  As a non-drinker, I noticed how clearly the stages of drunkenness appeared for nearly everyone: sobriety, euphoria, excitement, confusion, loss of interest, exhaustion.  We kept losing balls, but couldn’t find replacements in the rough.  Jeff, in my group, finally sent his last ball into the reeds, sat back in a drunken haze, and was spun around in the cart for our last two holes.  Somehow we made it through 18 and I’m sure the club was happy to see us go.

Despite the shenanigans of the weekend, I still felt like I had more mature conversations at this reunion than I ever had on Remote Year.  My last memory of the group on RY was at a frenzied party in Buenos Aires two years ago.  I had performed “Riptide” on guitar while Mai sang and everyone else joined in with tears in their eyes while clutching sticky booze-filled plastic cups. Maybe because we had all made a determined effort to travel and see each other, and weren’t just thrown together at random this time, that our conversations seemed deeper and filled with genuine interest.

Jeff nodded off in the backseat as Brian and I talked up front on our drive to Lyon.  We had waved goodbye to the rest of the group earlier and I was dropping them off on my way to a house sit in Burgundy.  “How do you do it?  How are you still traveling and not working?” Brian asked. 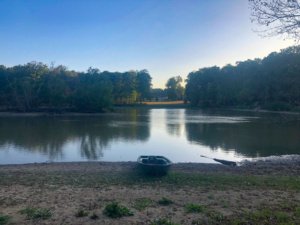 Lake at the Castle

I admitted that I was still traveling with the income generated from my savings, and as of now anyway, it seemed to be working.  I think of all the expenses I had in New York that my old job helped to foster: a Manhattan apartment, expensive clothes (at least relative to what I wear now), expensive food, an expensive nightlife, expensive vacations.  Instead of having that overhead, I’ve been living a minimalist lifestyle.  And instead of being exhausted from the never-ending social life I had in NYC, I’ve been energized by unlimited inspiration found in different settings.  I feel as though I’m ultimately getting more out of life.

Looking for free lodging had led me to house sitting where I’ve taken care of centuries-old homes in France, retreat centers in northern California, log cabins in Alaska and beautiful farms in New Zealand.  Looking for work exchanges (which include free lodging and food) guided me to work in safari lodges in Namibia, and nannying in places like Kangaroo Island, Australia.  It’s been through creativity (a result of being frugal), and taking more time for each day, that I’ve been able to get below the surface-layer that typically separates a culture from its visitors.  I’ve had more time to explore a place, embed myself in a community, the people and its neighborhoods.  For me, having a restrictive budget has meant a more fulfilling life.

Saved by the Camera

I snapped out of my daydream and inspected the indent on the bumper, then remembered a photo I took before leaving Hertz two weeks earlier.  It was taken for Janet so she could locate the car and license plate when I arrived at the train station.  Pulling up the photo on my phone, I showed it to the rental car employee.   The marks on the front had been there all along.

“Ah, good.  Then no problem for you.” he said, giving me my receipt and dropping the issue (a relief since I hadn’t gotten insurance).

“Thanks,” I waved as I wheeled my bag to the terminal.  I was heading to a flight- this time I was checking out Budapest on a $49 fare, just two days before a house sit in Switzerland.  For the cost of what that fender-bender could have been, I just got two more weeks in Europe.