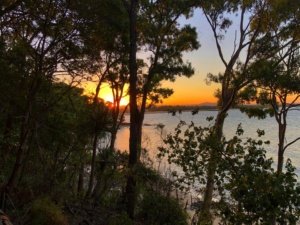 I am a guest here, volunteering through a company called Workaway, receiving room and board for 5 hours a day of work…  but it’s hard to call it work when you get to spend the days outside in the sunshine with wild animals, like koalas, in a tropical landscape.

My new home is near Noosa (Queensland, Australia) on a private sanctuary that is dedicated to saving wildlife and rejuvenating native plants to the area.  Noosa is far enough south in Queensland that the deadly ocean scares: salt water crocodiles (sandys) and deadly jellyfish (stingers) are absent.  It also has the perfect year-round warm weather climate along with surf breaks that range from nearly flat all the way up to challenging surf, depending on the beach.  It’s the choice vacation spot for most Australians.  The landscape facing inland is carpeted in lush forest with volcanic cones (part of the Glass House Mountains) appearing every 15 or so miles.  The towns vary from the popular upscale beach town of Noosa Heads (where the wealthy Australian’s come to vacation) to the aboriginal-hippy town of Eumundi, famous for its weekly Saturday Market, bookstore, and coffee shops. 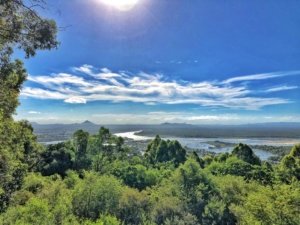 I was drawn to the Noosa, Queensland area because friends of mine from South Africa relocated here.  As a family of 5, they’ve lived in different parts of South Africa, the UK, the US, and even summered in Seychelles where their father worked as a surgeon pro-bono in a local hospital in exchange for a home on the island.

The last time I had seen all of the Cairns was in Costa Rica on a family surfing vacation I crashed in August of ’97.  Terry and Gillian, my friends Scott and Joana’s parents, were then still trotting the globe working and competing in marathons and extreme 100 mile races in places like Nepal and at altitudes of 12,000 feet (Terry, the father, ran a 2:20 marathon, which, at the time, beat the women’s world record; and Gillian held her own as a competitor in speed walking).  Less than 10 years later, they were all living (and loving living) in Noosa, Australia.  Even their oldest son, Sean and his new family, relocated from South Africa (where he was firmly planted) to the ‘Land Down Under’.

All 3 siblings are now married with kids and the parents have a farm just down the road from where I stayed.  On the farm, they raise goats for milk (and make goat cheese, goat milk, even goat yogurt and ice cream), have a few head of cattle: a mixture of dairy and beef cows, chickens, ducks, geese, one large and happy pet pig, and tropical fruit trees taking up a couple acres of property (lychee and black sapote- which tastes like chocolate pudding- among other fruits).  After being a renown surgeon and competitive runner, Terry Cairns now enjoys wrestling wild snakes, climbing trees barefoot to pull down piles of fruit, or herding rams and cattle, and he couldn’t be happier.  I mention barefoot because he runs barefoot, hikes through the woods barefoot, and farms barefoot.  And it doesn’t seem to be a problem.

I figured there must be something to this place if some of the coolest people I had ever met wound up moving here.  After visiting, I now know why.

Sometimes you just get lucky 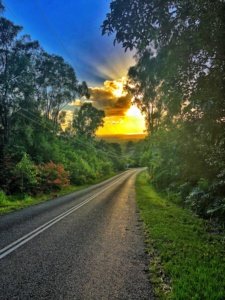 I applied and was accepted to a Workaway on this private wildlife and nature sanctuary run by Jana and David Cattanach.  They moved here over 3 years ago from the Nation’s Capital: Canberra (rated multiple times as the world’s #1 city to live in) and registered the land as protected.  They continue to take courses in saving wildlife and instilling native foliage: trees, shrubs and grasses, all while removing weeds to help native plants and wildlife regenerate.

I knew as soon as I arrived at Plum Gorgeous Sanctuary that it was going to be a second home for me.  Jana had her arms outstretched in welcoming as I pulled up in the driveway with David, who had just retrieved me from town.  I spent the rest of the morning getting a tour of the house and my private wing (I told you I was lucky), walking the grounds of the 12 acre property, seeing what projects needed to be done, and feeding the birds.  Later, they took me into the town of Cooroy (pronounced Croy, a town famous for its library) and treated me to a popular ‘Pub Lunch’, the British influence still proving strong down here.

Jana’s dream retirement home had been to live in this area and carve out a group home for her family and their budding families to come live and help protect the wildlife and landscape.  I came on the scene 3 1/2 years into this project and fell in love with both the lush and wild property, their open home plan, their welcoming community and immediate family. 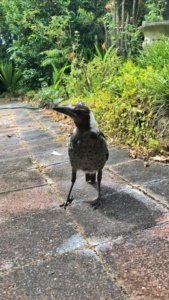 In the 2 weeks that I lived here, we nursed back to health 4 magpies whose mother had been killed, and later, we housed 2 adorable possums and a tiny baby bird that had been injured by a cat.  The magpies were released while I was there, but they insisted on coming back every day to our porch and front door to say hi and demand food.  They became comic sidekicks of mine, especially one bold magpie, Little Lee they called him, who hopped around me as I weeded and replanted the garden.

I worked from 8am-1pm, 5 days a week, but wanted to work more.  I looked forward to taking care of the property, weeding and planting, cleaning the house, and just generally treating the place as I would my own home.  Everyone was appreciative of my help, and there was something therapeutic about tidying up after other people.  It sounds crazy, and I kept thinking it was so strange that I actually enjoyed doing the dishes and wiping down the countertops after people breezed in and out, but I did.

One friend in the UK had described Workaway as indentured servitude (from British friends who had tried it), but if that’s what this was, I’ll take it any day of the week. 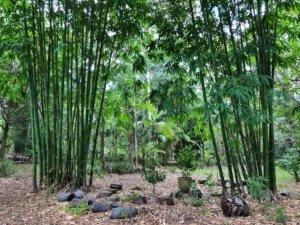 I loved my 2 weeks on “Plum Gorgeous” sanctuary.  I had my own part of the house, access to seriously good and healthy food anytime of the day, a beautiful deep pool to cool off and swim in, and a rainforest to care for.  I woke at 5:30 every morning, without fail, to the loud birds who lived all around us.  At night, the cicadas’ hum rose and fell in unison (at times deafeningly) and the toads alternated croaks out of synch in the distance. When I’d accompany Jana at night on her meditation walk, we’d spot large spiders weaving geometric art designs between trees in the glow of the flashlight.  I had never watched the careful and precise work of a spider before, but in the humid air with the line glistening, they look like knitting needles delicately weaving a shawl.  It was both mesmerizing and beautiful.  As we continued to walk along the path, moving the flashlight’s light to the ground, a toad would appear camouflaged in the leaves every 10 feet or so, frozen still, pretending to be a leaf.  We avoided stepping on these mini-landmines and crouched down to name the type of toad they were instead.

Aside from helping nurse animals back to health, I was dropped off at markets and beaches on my off-days or afternoons.  I was taken on trips to the grocery store and garden center.  Their Good-Will-combination-Food-Bank was everyone’s favorite (they call it the ‘Op Shop’ here) and I finally visited there as well.  I love perusing markets in different countries, with no intention of purchasing anything.  There’s only so much you can carry with you, and I also don’t need anything else; I’m perfectly content with the simplicity of my belongings and my life. 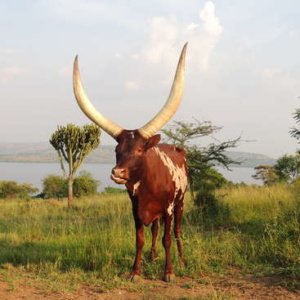 Workaway (see previous write-ups about Workaway) has been intriguing to me since I first discovered the site back in Santa Marta, Colombia during a coffee plantation tour with my friend Garvin Deters in March of 2017.  Acting as a nearly free volunteering website (about $25/yr), it’s a conduit for travelers looking to find a free meal and place to stay in exchange for (up to) 5 hours a day, 5 days a week of work.  The work varies from exciting tasks such as helping start a safari company in Uganda, labeling fauna in the mountains of Papua New Guinea, or painting murals on a famous hotel wall in Kandy, Sri Lanka.  It can also be as ordinary as helping a family clean up around their home or babysit their children… in places like Geneva, Switzerland, or Cape Town, South Africa.  Whatever you apply for and get accepted to, it’s a bit of a gamble for both the volunteer and host until you arrive in person and discover who you’ll be dealing with over the next week or month (and if you’d like to extend your volunteer period or cut it short).

After a couple of weeks of getting to know the Cattanaches, I was told that this was now my home and I will always have a room here.  My incredible Workaway experience and adoption into an Australian family gave me the courage to move onto my next planned excursion on Kangaroo Island in South Australia, though it’s been difficult to leave this utopia behind.

Life on the road is exciting, the future filled with possibilities and the unknown.  Not everyone is as lucky as I am to have experienced an amazing first Workaway experience, and I do realize that.  I’m bracing myself for challenging adventures ahead.  This time, I’m okay with leaving paradise, Jana, David, the Cairns, and Little Lee the Magpie, because I know I’ll be back.