A Metal Flower, a Cemetery, and Dante’s Inferno:  Welcome to Buenos Aires

A Metal Flower, a Cemetery, and Dante’s Inferno:  Welcome to Buenos Aires 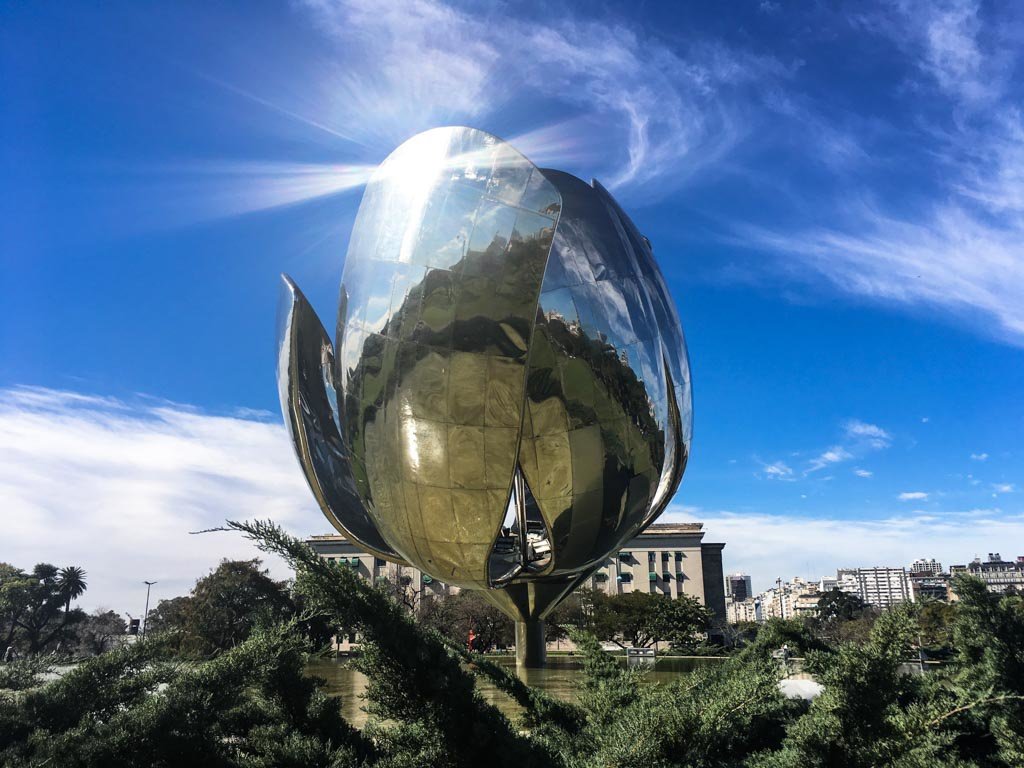 What does a metal flower, a cemetery, and Dante’s Inferno all have in common?  The answer:  Buenos Aires.  A blooming 105-foot stainless steel flower comes to life every morning at sunrise; a spectacular cemetery of Greek pillars, grandiose mausoleums and Roman monoliths takes you back in time; and a building that descends from heaven to hell in a tribute to the Divine Comedy are just 3 of the many fascinating spectacles to see here in Buenos Aires. 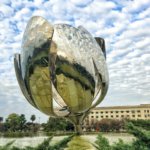 A Flower that Blooms All Year

Built in 2002, the Floralis Genérica was a gift to the city of BA from Eduardo Catalano.  Standing over 75 feet tall and 105 feet wide, made of stainless steel and aluminum, this immortal flower opens and closes with the sun.  It sits inside a reflecting pool, within a park saddling the Law Library, in the neighborhood of Recoleta.  Its daily homage to the sun creates a giant reflection of the city, its surrounding park, and the open sky.  At night, it closes itself around a blue light.  This artistic tribute to eternal beauty is both mesmerizing and a photographer’s dream. 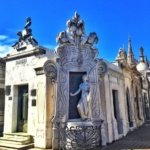 The Most Beautiful Cemetery in the World

The Recoleta Cemetery is in itself an art piece.  Just a few blocks away from the Floralis Genérica, this cemetery is a final resting place for politicians, military heroes, celebrities, and most of all, the wealthy.  It was the city’s first cemetery, built in 1822, and what started off as a traditional cemetery, soon took off as an architectural competition.  The area was designed like a mini city, with tree-lined walkways, stone streets, alleyways and plazas.  All 4,800 vaults are visible above ground, some occupying real estate 6 levels below the surface, but all of them housing caskets.  As BA revved up for its architectural boom in the 1880’s, this cemetery became a rivalry among the wealthy, each tomb built to out-shine the last.  Much of the materials used were brought over directly from Paris and Milan.

The grand entrance of neo-classical gates and Doric columns leads you into endless rows of Greek temples, fairytale grottoes, cathedral domes, and Gothic chapels.  The most famous grave, of course, is Eva Peron’s, whose body was exhumed 3 years after her death (due to her husband’s forced exit from the Presidential office) and placed in a secret hiding place in Europe for 20 years before being returned to her family’s mausoleum in the cemetery.  Quite possibly the most famous person in Argentine history, her casket is placed more than 15 feet below the surface under tight security.

One of the many sad but touching stories in the cemetery is of a young woman, Liliana Crociati de Szaszak, who was killed by an avalanche in Innsbruck, Austria at age 26.  Her parents constructed a life-size bronze statue of her in her wedding dress.  Shortly after, her beloved dog Sabú died and his statue was added next to hers as an eternal companion.  Her mausoleum is in Neo-Gothic style, a noticeable contradiction to those around it.

One of the strangest and most interesting tours I’ve been on was of Palacio Barolo, BA’s first skyscraper built in the 1920’s.  Oddly enough, the building was constructed initially as a mausoleum for Dante Alighieri’s ashes, the author of the Divine Comedy.  The building’s owner, Barolo, was afraid all of Europe would be destroyed during WWI, and Dante’s ashes along with it.

The building itself took on symbolic expressions and analogies from Dante’s poem.  As you walk in, the lobby itself represents Hell, with serpents and dragons peering down from the corners.  The place where Dante’s ashes would have been stored is in a marble box under a condor in the center of the lobby (they never did get ahold of his ashes).  Floors 1-14 represent Purgatory, and 15-22 represent Heaven.  The dark lobby of Hell eventually raises up to the natural light (on the top floors) of Heaven.  The address represents the years it was written, 1308-1320 (it’s on the 1300 block), and the building height (100 meters) matches the number of cantos in the poem.

The view from the glass tower on the highest floor is worth the trip in itself, allowing you to peer out over Plaza Mayo, National Congress, and the French architecture that fills the city.  On a clear day, you can see almost all of Buenos Aires from the renowned lighthouse that mimics a true celestial sphere, just like Paradise described in the poem.  Dante would be proud.